After hearing about the health benefits and moral elevation practitioners have experienced from practicing Falun Dafa, as well as how severely the Chinese Communist Party (CCP) has persecuted practitioners, quite a number of Chinese decided to quit the CCP.

Below are reports from Isartor, one of the three surviving medieval entrances to the city of Munich, and Marienplatz, the city's main square since the 12th century. 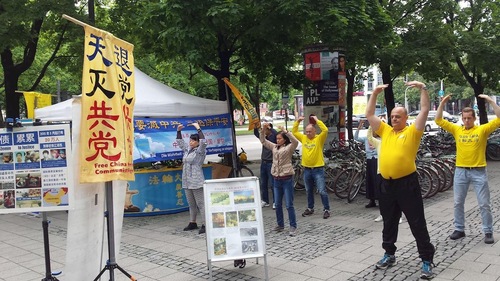 Practitioners demonstrate the Falun Dafa exercises at the historic site of Isartor in Munich on Saturday, May 25, 2019.

Bavarian practitioners held activities at Isartor on Saturday, May 25, 2019, at a tour bus hub. They performed the Falun Dafa exercises and displayed posters and banners to explain misconceptions caused by the Chinese communist regime’s slanderous propaganda.

A tourist from China took pictures of the banners and posters up close, and other tourists took pictures and videos of the exercise demonstration. 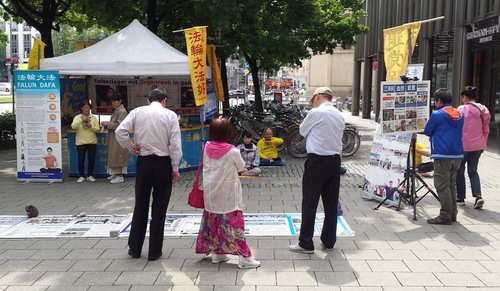 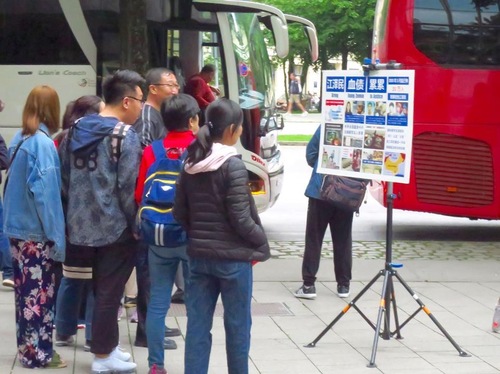 Ms. Teng, one of the practitioner volunteers, said a few Chinese tourists decided to quit the CCP and its youth organizations after talking to her. “Some of them had already picked up materials from other tourist attractions and read them. So making this decision was straightforward for them,” she explained.

A tourist sat near the practitioners for a while reading the informational materials. When it was almost time for him to board the bus, Ms. Teng went over and greeted him: “Would you like to quit the Communist Party so you won't be implicated by their crimes? You’ve read the materials, so you understand the importance. We can call you Ming Fu (a pseudonym to protect his identity). Quitting the Party will keep you safe.” The man nodded and agreed to renounce his CCP membership using the pseudonym. 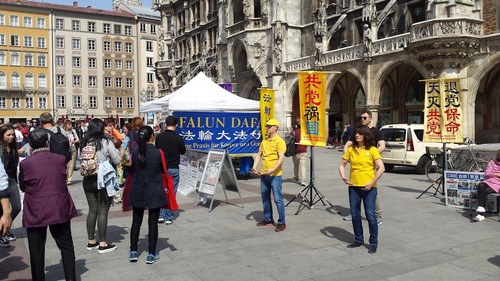 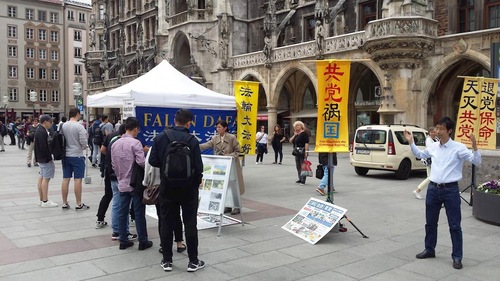 Tourists stop at practitioners’ booth in Marienplatz to read about Falun Dafa. 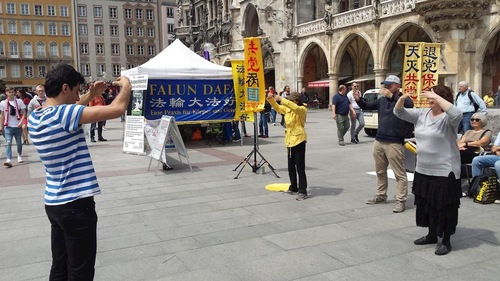 A man follows along with practitioners' movements as they demonstrate the exercises.

Practitioners set up a booth with banners at Marienplatz in Munich's city center on Saturday, May 18, 2019, and demonstrated the Falun Gong exercises. They also displayed posters explaining how practitioners have been persecuted in China for their belief, including information about forced organ harvesting.

Because several major events were being held close by, such as Intersolar Europe 2019, European Sign Expo 2019, and FESPA Global Print Expo 2019, professionals from other European countries and around the world passed by the practitioners' booth. Many people came over to talk with practitioners and learn more about the persecution in China.

Two German neurologists chatted with practitioners for a while and wanted to learn more about the state-sanctioned organ harvesting from living Falun Dafa practitioners in China. Before leaving, they took some materials to share with their colleagues and said they would discuss how to help end these atrocities.

A German woman came over on her bike and was shocked by the severe torture practitioners have suffered in China for their faith. She held back tears as she read the posters and listened to a practitioner’s explanation. She signed a petition to show her support.

One practitioner named Ms. Chen said a number of Chinese tourists had agreed to quit the CCP organizations during the practitioners' activity.

“One woman said that they all know what is going on in China, but there is nothing they can do. So I suggested she follow her conscience and support what is right. She nodded and decided not to be associated with the Communist Party,” Ms. Chen explained.

New Practitioner: This Is Very Meaningful 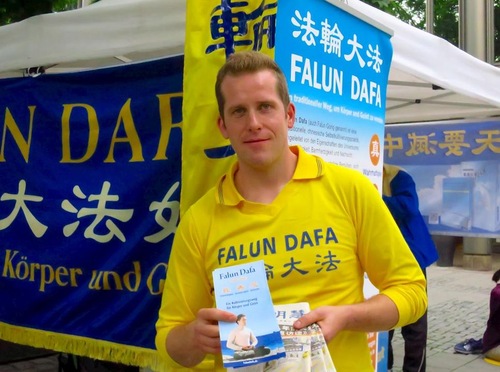 Marcel Winter lives in Bavaria and started to practice Falun Dafa three months ago. He first encountered Falun Dafa a year ago during an activity much like the one in Munich. He signed a petition to support practitioners. Later on, he learned the Falun Dafa exercises from a friend and began to read the related teachings. “It was quite an interesting experience because I learned why we came to this world,” he remarked.

The changes he experienced were dramatic. “I stopped smoking and doing drugs. I also came to understand what is appropriate between a man and a woman, while in the past I was so wrong,” he said. His family also noticed these changes and found that he was more willing to help others after learning Dafa.