Attendees of the New York Conference Talk About What They've Learned

(Minghui.org) On May 17, the 2019 New York Falun Dafa Cultivation Experience Exchange Conference was held at the Barclays Center. About 10,000 Falun Gong practitioners from all over the world attended the Conference.

Master Li Hongzhi, the founder of Falun Gong, (also called Falun Dafa) gave a lecture and answered questions from practitioners. Twelve speakers shared their experiences. Many participants felt the great compassion of Master Li. After the conference, some practitioners said that it was a great honor to be a Dafa disciple, and they cherish the opportunity to cultivate. 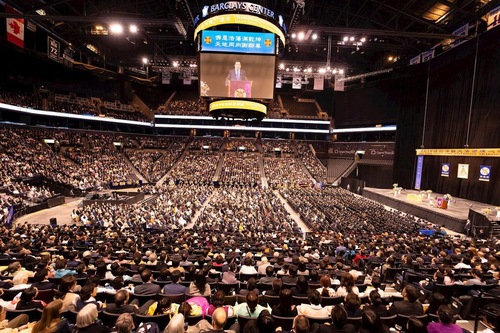 Encouraged by the Conference

Li, a Taiwanese colonel, began to practice Falun Gong 18 years ago. Li was very touched and grateful that he could listened to Master Li’s lecture in person.

He said, “I feel that Master has repeatedly reminded practitioners to look inward. It is very important to look inward for our problems when running into difficulties or conflicts.”

He continued, “After returning to Taiwan, I have to work hard on this [aspect of my cultivation]. It will help me resolve many conflicts, be more efficient, and be in harmony with others.”

“I saw so many Dafa disciples from different countries. We speak different languages, and come from different cultures, but we cultivate the same practice. It is great to hear the speeches, which are very encouraging. I felt as if I was in a pure land in the human world. Compared to the chaos in the world, this occasion is very precious,” Li said.

The speeches of several practitioners also touched his heart, especially the speech by the young Shen Yun Performing Arts dancer, who mentioned that only after he was forced to leave the environment, he had a real understanding of “cherish the opportunity of cultivation.”

“From this cultivator's speech, I saw my own shortcomings. I have been busy with work and I sometime slack off in cultivation. It is really embarrassing. I really need to be more diligent and I need to cherish this opportunity." 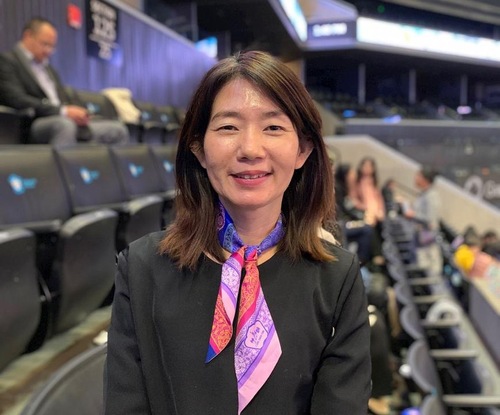 Jiahui, a teacher from Tainan, Taiwan

Jiahui said: “It is an incomparable glory to be a Dafa disciple.” To her, the most inspiring message at the conference was to “let go of attachment to self.”

She went on to say, “Several practitioners mentioned that they can do things better, only if they can let go of the attachment to 'self,' and look inward for their own shortcomings. In the future, I must be strict with myself, and more diligent in cultivation.”

Jiahui was also touched by the speech, in which the young dancer spoke about cherishing the opportunity to cultivate. She said, “That speech was quite inspiring. To really cherish [cultivation] means that regardless of how difficult the situation is, one can keep a grateful heart, do what one should do, firmly face all difficulties, and overcome any predicament to strengthen oneself.”

“It is very touching. When I participated in a project, I did not put cultivation and truth in first place, but always wanted to make my life better. When I encountered adversity, I wanted to run away.” 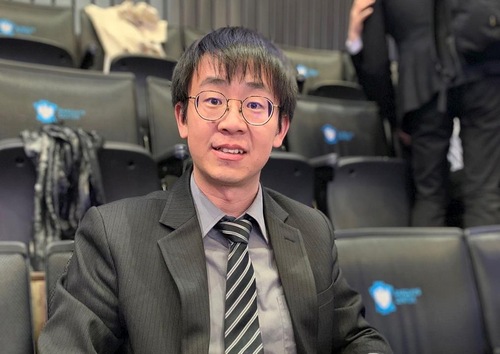 Huikuan, who works at a well-known university in Taiwan, has participated in many experience sharing conferences in the United States.

He mentioned the speech by the Shen Yun dancer and said, “When a fellow practitioner encounters tribulations, instead of thinking of himself, his first thought is of Master. Then, he thought about looking inward for his attachments and returning to Shen Yun in an effort to save sentient beings. I do see my shortcomings.

"Master has mentioned that young Dafa disciples are more likely to aim high and crave for something out of reach. That is, some people want to do a lot of things at the same time. What I really need to do now is to do a good job of cultivating myself. Only this way can I do things well." 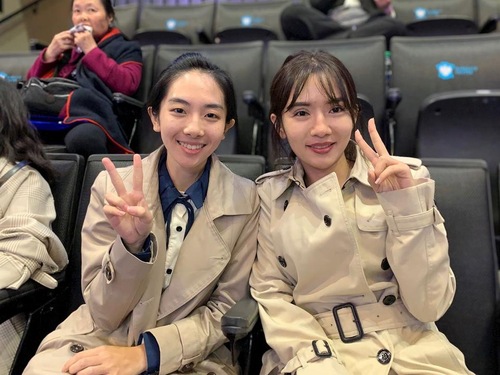 Yanchun, who had just graduated from the Department of Telecommunications Engineering attended the conference with her entire family.

She said: “I will hurry up and cultivate myself to keep up with the Fa-rectification process.”

She was particularly moved by the Shen Yun dancer's speech. She said: “He is my age. When his hamstring was accidentally injured, he saw his attachments because of solid Fa-study.”

He let go of his fear, and managed to pass through his difficulties with solid belief in Master and Dafa. I see my own problems through him. When I first run into problems, the first thing I generally think of is always myself.”

Yanchun also said that she will do better when it comes to doing the exercises. “I will hurry up and keep up with the Fa-rectification process,” she said.

New Practitioner Encouraged by the Conference 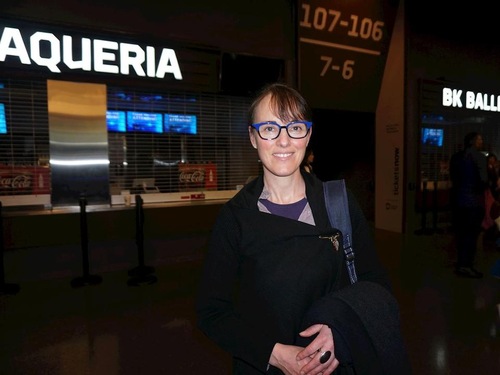 Emmanuelle Bourdy is from Jura, eastern France. She is a relatively new student, who began to practice Falun Dafa (also called Falun Gong) in 2018. She said, “Since then, my life has undergone a fundamental change.”

Master Li’s lecture helped her realize that the time for cultivation is limited, and that she needs to be more diligent.

Fellow practitioners’ speeches amazed her. She said: “I am very touched. They have the ability to validate the principles of Truthfulness-Compassion-Forbearance. Very touching.”

She recalled the first time she attended the conference. “It was in Washington D.C. last year. I cried the entire time. I could not help it. I also cried today. The compassion radiating from practitioners’ speeches made me cry.”

She continued, “I was looking for the answer to the meaning of life since I was 14. I also practiced many other [cultivation] methods and never got an answer. But Zhuan Falun (the main book of Falun Gong) answered all my questions. For example, why do we live? Why do people suffer? What is the universe? All the answers are in Zhuan Falun. I have no longer any doubts.”

Cherishing the Opportunity to Meet with Fellow Practitioners 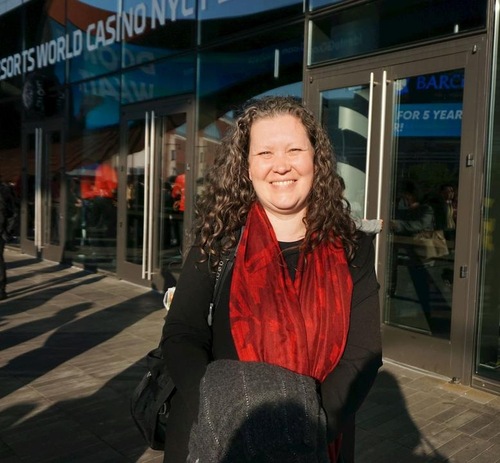 Sonia lives in Montreal and has been practicing Dafa for six years. She felt that the conference was sacred, wonderful, and touching.

She said, “I had the opportunity to meet so many fellow practitioners, and the cooperation among them is very good. I listened to the experience sharing speeches. Everyone spoke of how to think about others, and finding their shortcomings. This is not something that ordinary people talk about.”

She felt that it is amazing that cultivators always look inward when facing difficulties.

“I was moved to tears at the Conference. The speeches made me think about how to improve, so that I can do better without hurting others. Only Dafa can make people do this.”

She felt that “Master Li seemed to see practitioners as his family. He is very kind. He cares about everything of ours. After his speech, I felt that I am not doing enough in cultivation.”

Sonya also mentioned that she had serious migraines before she started practicing Dafa. She said, “My grandpa, father, aunt, and all other family members are suffering from this illness. But, after I practiced Dafa for three months, my headaches disappeared. The doctor said it was a miracle.”

Realizing that Time is Limited 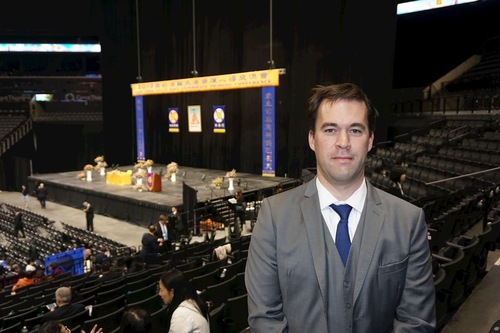 Mathieu started practicing Falun Dafa in 2003. Master Li’s lecture today made him realize that time is limited and we need to strive forward diligently.