(Minghui.org) Ten thousand Falun Gong practitioners held a grand parade and rally in Manhattan, New York, on May 16, 2019. The parade started from Dag Hammarskjöld Plaza near the United Nations and moved along 42nd Street across Manhattan, finally arriving at 11th Avenue.

The parade raised awareness about Falun Gong and the plight of practitioners in China among passersby and spectators. Among them were many overseas Chinese tourists.

Mr. Liang, a New Yorker who emigrated from Shandong Province a decade ago, said he followed the parade of a long time.

“I can't use words to express it, but I am very excited,” he said, “If everyone practices 'Truthfulness-Compassion-Forbearance' the world would have to become better.” 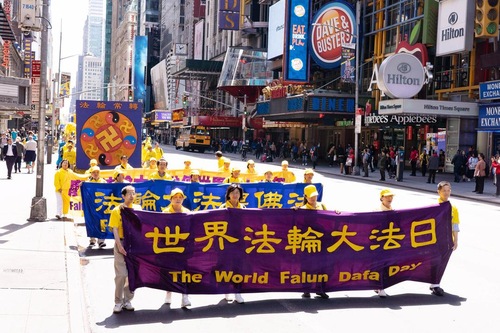 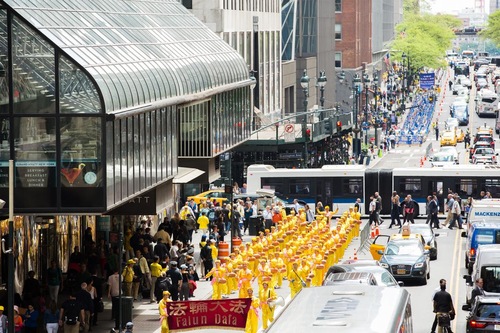 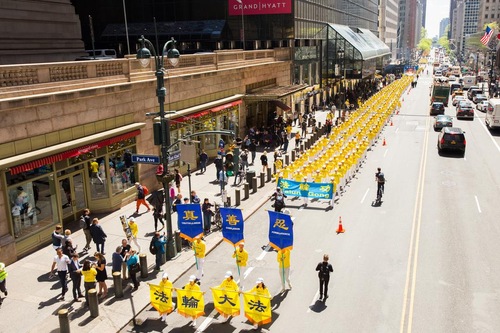 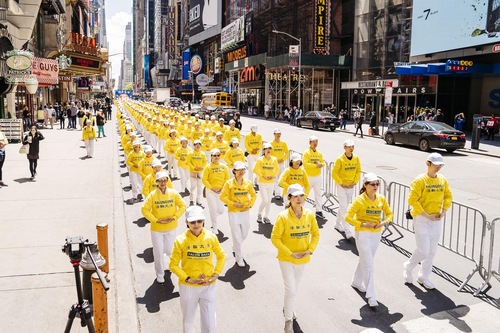 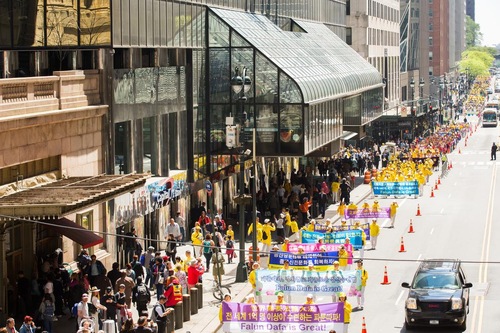 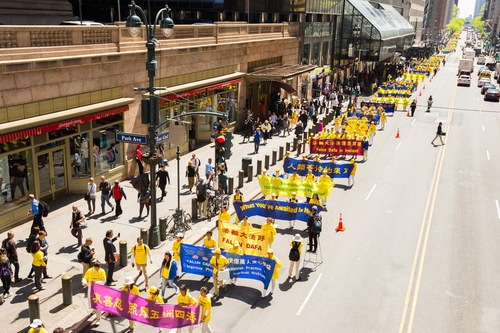 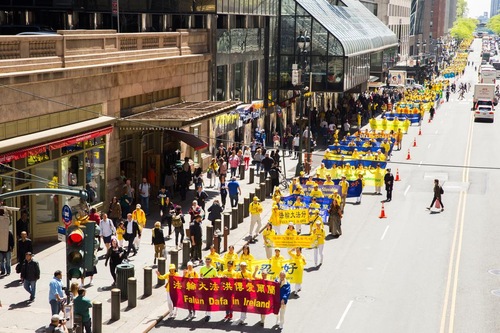 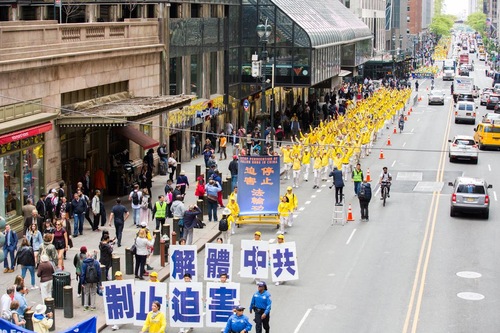 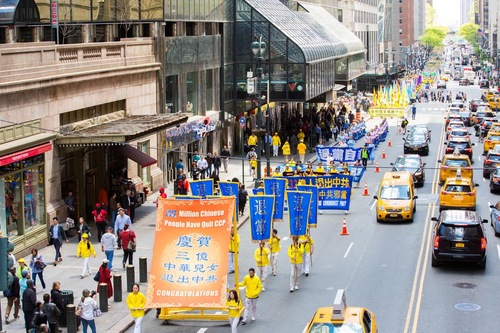 Two international students from China were watching the parade from an intersection when Ann, a Falun Gong practitioner who is about their age, walked by distributing fliers to spectators. The two students had a lot of questions to ask her.

“Why do you practice Falun Gong?” “Why are so many Falun Gong practitioners parading?” “How many years have you practiced Falun Gong,” and “What are the benefits of practicing Falun Gong?” They poured a series of questions at her.

Ann also told them how the so-called “Tiananmen Square self-immolation incident” was staged by the Communist regime to frame Falun Gong. “There are no special requirements for practicing Falun Gong; you can come and go as you like, and it is free of charge. It is absolutely not what the communist regime has propagandized,” she told them.

One of the students had learned more about Falun Gong after arriving in the United States, so she explained things in more detail to her friend. They each took a flier from Ann and thanked her.

'The Communist Party is the evilest!'

Mr. Liang has lived in New York City for 11 years. He saw a few people wearing yellow t-shirts with Falun Dafa is Good printed on them, and decided to follow them. He found that he had arrived at the plaza near the United Nations.

He joined the rally and listened to the speeches. When the parade started, he followed the Tian Guo Marching Band along the parade route. He was too tired to follow after the half-way point, so he stood on the sidewalk and rested a little as he watched the procession.

“By their appearance you know they are kind people,” he said, chatting with a reporter, “Not like us [non-practitioners]. Frankly, we might do anything for a little personal interest.

“In mainland China, you are not allowed to practice Falun Gong, and are not even allowed to do a good deed. You have to do good matters secretively, otherwise the police come to arrest you.

'I will share parade photos and videos with friends in China'

Mr. Chen, from Guangxi in China, has lived in New York for two years. Mr. Chen introduced himself to the reporter, “This is my first encounter with a Falun Gong parade. It is very peaceful and comforting. I know that Falun Gong is a group of peaceful people. I quit the Youth League and Young Pioneers in 2005.”

He had a Falun Gong practitioner friend who worked in a bank. After the persecution started in 1999, the friend was dismissed from his job and evicted from his apartment.

“He is now nowhere to be found. I believe someone must step up to uphold justice,” he said. “I am going to share the photos and videos of today's parade with friends in China.”

'Every Chinese should quit the Communist Party and its affiliated organizations' 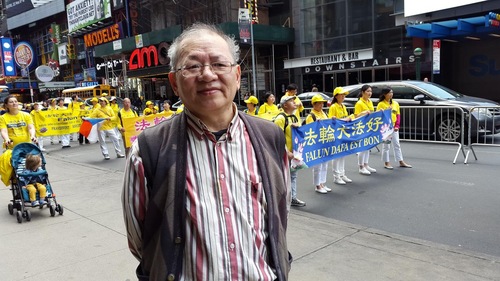 Mr. Chung, from Taiwan, was watching the parade from the sidewalk. When asked for his opinion, he urged mainland Chinese to quit the party and its affiliated organizations.

“After so many years, the world has already learned what Falun Gong is. But it is very difficult for some Chinese to change their minds. They simply are used to living like this. It's like in that novel 'Hong Lou Meng', [Dream of the Red Chamber, or The Story of the Stone], 'A minion is used to standing, if you tell him to sit, he feels very uneasy.'”