(Minghui.org) The U.S. Commission on International Religious Freedom (USCIRF) called out China as one of the world’s most egregious persecutors of religious faiths in its 2019 annual report released on April 29. The report also states that the Chinese Communist Party (CCP) is still harvesting organs from Falun Gong practitioners on a large scale. 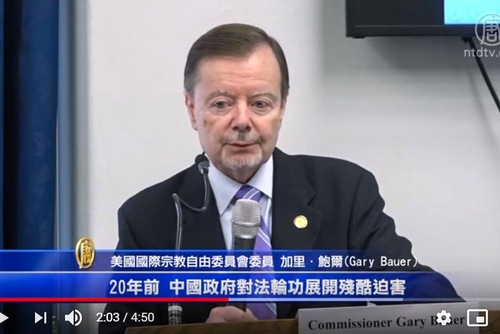 Gary Bauer, USCIRF Commissioner, relayed that the committee recommended that the U.S. government quickly and decisively sanction CCP officials and institutions that commit or condone serious violations of religious freedom.

The report mentions that Jiang Zemin, former head of the CCP, launched the persecution of Falun Gong in 1999 and founded the 610 Office, an institution that is above the law and that is charged with eliminating Falun Gong.

The report states that Falun Gong practitioners are arbitrarily detained, shocked with electric batons, and forced to become subjects of medical and psychological research.

In 2018, the Chinese authorities continued to harass, detain and intimidate Falun Gong practitioners because of their belief. It has been reported that many practitioners who were detained were beaten, subjected to mental abuse, endured sexual assault, forced to take unknown drugs, and deprived of sleep.

The report discussed the CCP's claims that as of January 1, 2015, it had ended the practice of harvesting organs from prisoners (many detainees are believed to be Falun Gong practitioners). However, in 2018, human rights activists, medical professionals, and investigators provided more evidence that the CCP is still continuing the organ harvesting on a large scale.

The report stated that last November, the Changsha Judicial Bureau in Hunan Province, China barred two lawyers for six months because they defended Falun Gong practitioners and said in court that Falun Gong is not a cult.

In November last year, during the United Nations periodic review of China, the United States questioned the issue of the persecution of Falun Gong and the closure of Christian churches in a written questionnaire, which was submitted in advance.

Gary Bauer, USCIRF Commissioner, said at the press conference for the annual USCIRF report that the situation in China is still deteriorating. To this end, the Commission made a series of recommendations to the Administration, including that all bilateral negotiations between the United States and China, especially in ongoing trade negotiations, place religious freedom and human rights issues on the table.

The commission also recommends that the U.S. government promptly and decisively sanction Chinese officials and institutions that commit or condone serious violations of religious freedom. Finally, the commission urges the U.S. and other governments to pressure the Chinese communist regime to unconditionally release prisoners of conscience.