(Minghui.org) Falun Dafa practitioners celebrated World Falun Dafa Day, at the National Mall in Washington, D.C., on May 4, 2019. They did the Falun Dafa exercises together and held dancing and singing performances.

Falun Dafa, also known as Falun Gong, was first made public in Changchun, in China's northeastern Jilin Province, on May 13, 1992, by the practice's founder Master Li Hongzhi. The practice has since spread to more than 100 countries around the world. The very first “World Falun Dafa Day” was held on May 13, 2000. 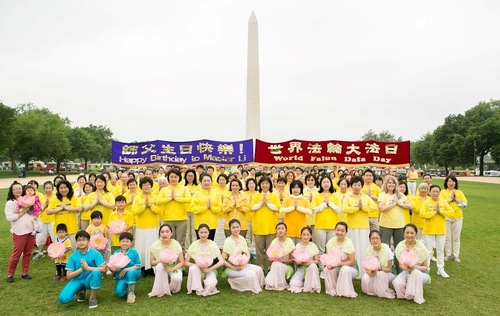 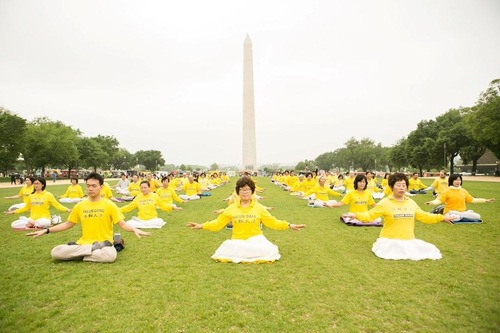 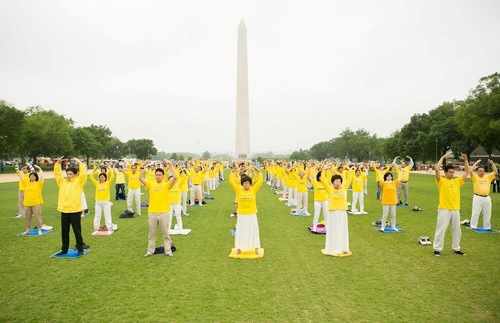 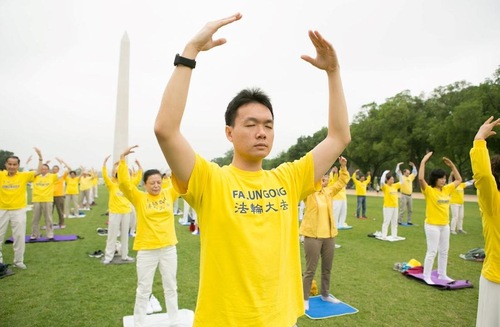 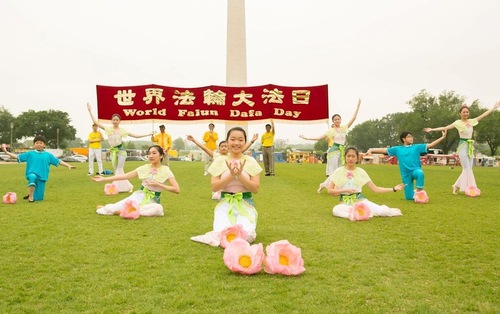 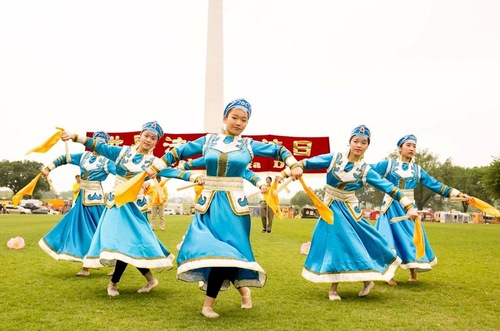 Young practitioners from the Minghui School perform a Mongolian dance. 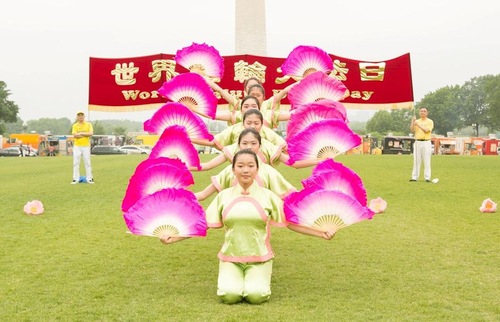 Young practitioners from the Minghui School perform a fan dance. 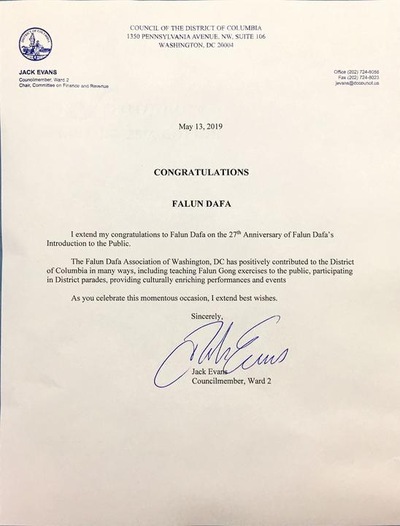 Washington, D.C. council member Jack Evans sent his congratulations to Falun Dafa on the 27th anniversary of its public introduction.

He stated, “The Falun Dafa Association of Washington, D.C. has positively contributed to the District of Columbia in many ways, including teaching Falun Dafa exercises to the public, participating in district parades, and providing culturally enriching performances and events.” 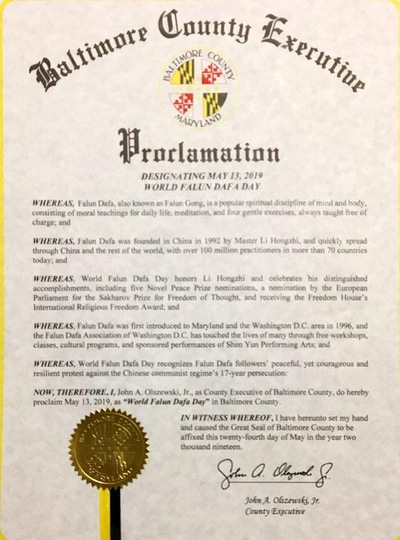 A proclamation from Baltimore county executive John A. Olszewski, Jr.

Baltimore County executive John A. Olszewski, Jr. issued a proclamation designating May 13, 2019 as World Falun Dafa Day in the county.

Mr. Olszewski stated in the proclamation, “Falun Dafa was first introduced to the Maryland and the Washington D.C. area in 1996, and the Falun Dafa Association of Washington D.C. has touched the lives of many through free workshops, classes, cultural programs, and sponsored performances of Shen Yun Performing Arts.” 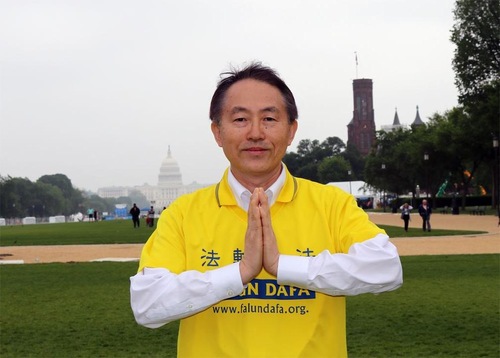 Dr. Zhiming Zou, an actuary, has participated in World Falun Dafa Day celebrations every year since the event's inception. He said he is thankful for Master Li, the founder of Falun Gong, from the bottom of his heart. 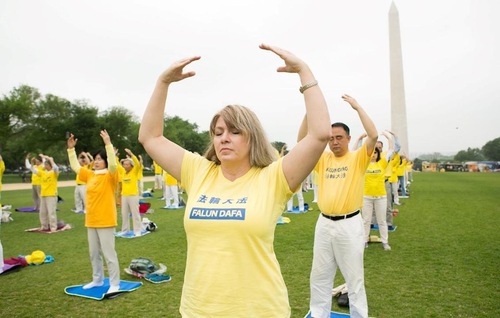 Within a few months of her practicing Falun Dafa, she saw a marvelous change in her health and her character. Both her serious humpback and her back pain disappeared. Her legs also had a problem where the right one was longer than the left, but now they are both the same length. She has become more patient in dealing with her patients and she is very grateful to Master Li. 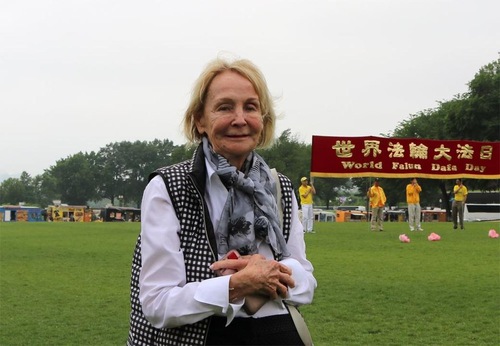 Barbara, a tourist passing by

A tourist named Barbara was passing by the National Mall when she saw the banner bearing the words, “World Falun Dafa Day.” She asked a practitioner, “Is this the Falun Dafa that the Chinese communist regime persecutes?”

She said that it was inconceivable that such a peaceful practice would be persecuted. She appreciated the practitioners for bringing the grace of Falun Dafa to America. She took photographs to remember the celebratory event. 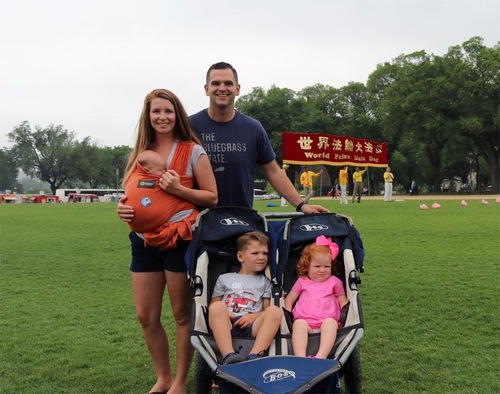 Jacob, his wife and three children

Jacob brought his wife and three children to the National Mall. They were drawn by the young practitioners' dancing.

“I feel the righteous energy. It is wonderful,” Jacob said. He works for the Department of Defense and was being dispatched to Japan for three years. He was happy to learn about Falun Dafa before going to Japan.