My Trip to Hong Kong and Macau

I was shocked when I entered Hong Kong. Everywhere I went, there were banners defaming Falun Gong. They were put up by the Youth Care Association, an organization sponsored by the Chinese Communist Party (CCP) to counter Falun Gong practitioners’ efforts to raise awareness of the CCP’s persecution of their faith. I also saw practitioners’ information boards and newspapers.

Our tour guide told us, “Hong Kong has freedom of belief, but we cannot accept any materials about Falun Gong or buy Falun Gong books. Otherwise, we may be intercepted and searched when we re-enter China.”

No matter where we went in Hong Kong, including jewelry shops, candy shops, and restaurants, there were Falun Gong practitioners and members of the Youth Care Association.

They did not allow tourists to read the practitioners’ posters but instead intimidated them by recording them and threatening to post the videos online. Each member of the Youth Care Association had a camcorder under their neck so they could easily and continuously record anyone who interacted with practitioners. They were also very aggressive. In contrast, the practitioners held banners and poster boards peacefully. 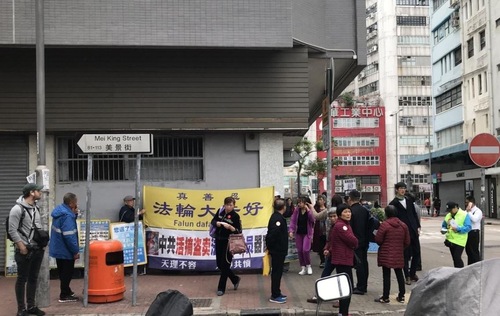 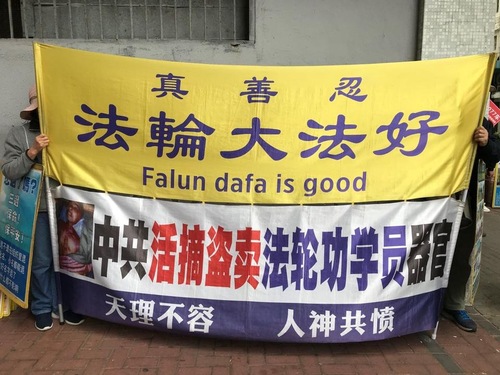 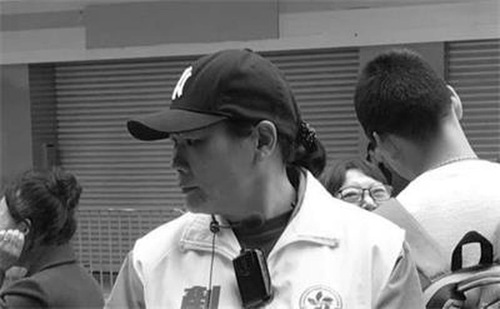 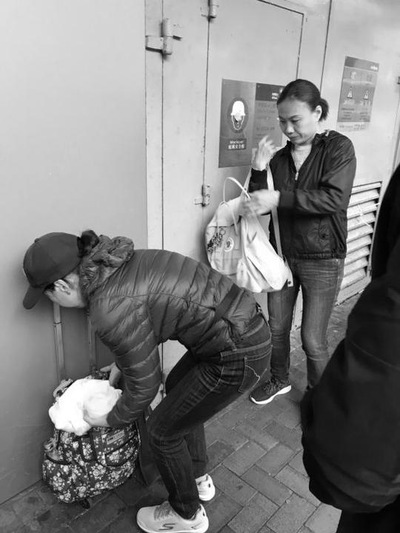 Two members of the Youth Care Association prepare to leave at the end of their shift.

Falun Gong practitioners in Macau set up information boards beside the Ruins of St. Paul. They used a megaphone to play recorded messages telling tourists about the persecution in China. I noticed that very few tourists looked at the practitioners’ information because the tour guides had listened to the CCP’s propaganda and directed the tourists away. 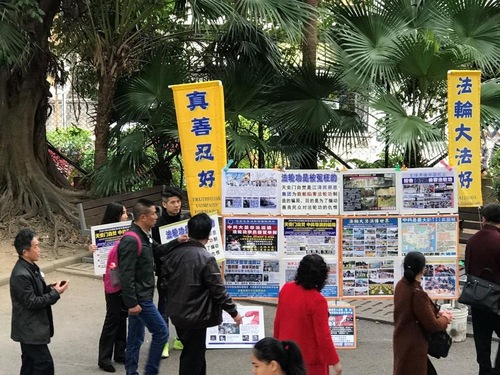 The Ruins of St. Paul in Macau

Travelers who go to Hong Kong on their own are not restricted by tour groups and can freely go sightseeing, shopping, and learn about Falun Gong. Those who travel with organized tour groups have no free time, and every minute is tightly scheduled. One must line up to shop, eat, or even go to the restroom. For example, my tour group was scheduled to spend two hours in one small shop, and we were not allowed to leave.

A friend of mine who just returned from Hong Kong said that he was not followed by Youth Care Association members because he did not travel with a tour group. He also mentioned that it was easier to go through customs, and his baggage was not searched.

This may be the reason that only tour groups are required to apply for permits to visit many areas of Hong Kong. They are preventing people from mainland China from learning about the persecution being carried out in their own country.

“Do Not Resort to Human Notions When Dealing with Difficult Situations”