(Minghui.org) A few days ago, I had the opportunity to visit Vietnam. Wherever I went, I witnessed Vietnamese Falun Gong practitioners clarifying the truth.

In Hanoi, Cat Ba Island, and other places, they were alone or in groups of two to four. They held posters, explained what Falun Gong is, and told Chinese tourists about the Chinese Communist Party's (CCP) persecution of the practice. 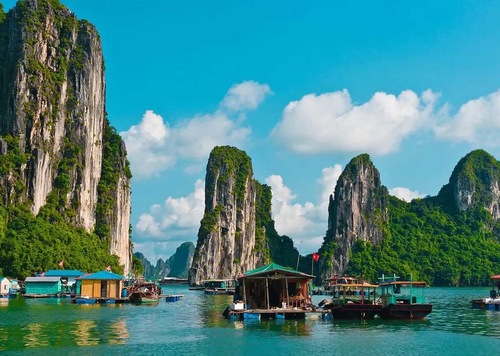 In Ha Long Bay, I saw a young Vietnamese woman standing at the parking lot. She was dressed neatly and holding a large photo album.

She was showing tourists who had just finished their lunch the truth about Falun Gong. She was surrounded by six or seven Chinese tourists, who were talking to each other. I walked over and heard a tourist say, “Thank you! Thank you for your nice words!”

There were large pictures on either side. Each page featured a large title at the top, pictures, and descriptions. They were clear and attractive.

The topics included how Falun Gong has spread to more than 100 countries, the CCP-staged Tiananmen self-immolation incident, the CCP state-sanctioned live organ harvesting from Falun Gong practitioners, the lawsuits against Jiang Zemin (the former CCP head who initiated the persecution), the stone in Pingtang, Guizhou, with the characters “The Chinese Communist Party is doomed,” and so on.

When most of the tourists had finished lunch, the tour guide asked them to board the bus. The woman with the album then stood quietly by the side of the coach, rhythmically flipping the album pages so that those boarding the bus could see them, and those inside the bus could see the pages through the windows.

As the bus pulled away, she waved, and the tourists waved back.

About 50,000 to 60,000 Chinese tourists have visited Vietnam every year in recent years.

“My Neighbor Understands and Quits the CCP”

“Retired Teacher Arrested for Talking to Neighbor about Falun Gong”