From San Francisco to New York, Practitioners Introduce Peaceful Meditation to their Communities

(Minghui.org) Over the past weekend, Falun Gong practitioners across the U.S. attended numerous community events to introduce the peaceful meditation practice to the public and raise awareness of its ongoing persecution in China. 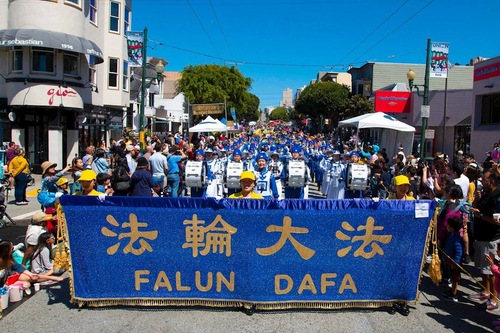 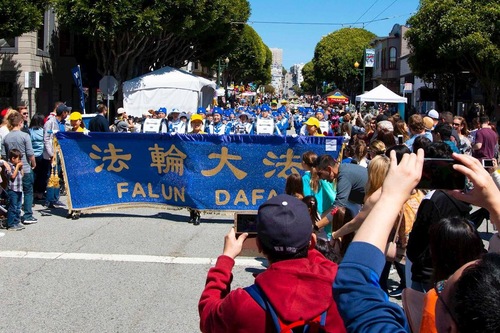 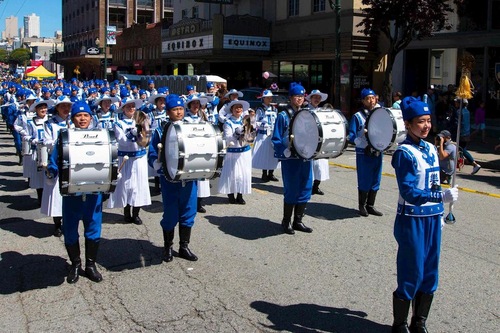 Tian Guo Marching Band in the Easter Parade in San Francisco on April 21, 2019.

In San Francisco, practitioners joined the Easter Parade, which started at 2 pm on Sunday, April 21. Spectators applauded both the Tian Guo Marching Band and the practitioners’ float.

Dennis Beckman, founder of the event, said he liked both the performance and the costumes. Having played the trombone back in high school, Beckman has an appreciation for music and was impressed by the band’s melodies. He also praised Falun Gong’s principles of Truthfulness-Compassion-Forbearance and referred to the persecution in China as disgraceful.

Gynam is a teacher who came to the event with her son. “I can tell the band members are very talented, and the music is really awesome,” she said. After hearing about the human rights violations in China, she said everyone should have freedom of belief. “The persecution in wrong, and we should tell people about it,” she remarked. 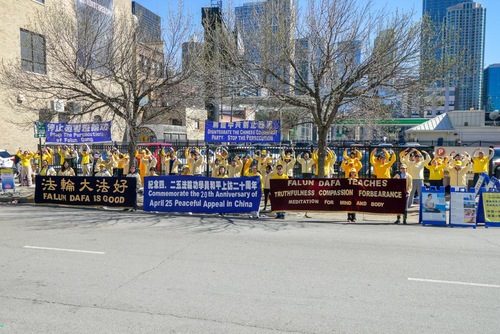 Practitioners do the Falun Gong exercises in front of the Chinese Consulate in Chicago on April 20, 2019.

During a rally in front of the Chinese Consulate in Chicago on April 20, practitioners commemorated the peaceful appeal in Beijing by 10,000 practitioners on April 25, 1999. “It happened after practitioners in the nearby city of Tianjin were arrested for their belief. They didn’t shout slogans or make noise, and the scene was calm and peaceful,” recalled Wang Weiyu, who was a student at Tsinghua University at the time. Because of his faith, Wang was secretly arrested and sentenced to 8 years’ imprisonment. He was kept in Qianjin Prison in Beijing.

Another practitioner, Huang Kui, was also imprisoned for five years because he practiced Falun Gong. While detained, he force-fed, shocked with electric batons, deprived of sleep, subjected to brainwashing, and humiliated in various ways.

“The appeal in April 1999 demonstrated Falun Gong practitioners' forbearance, peaceful nature, and courage to safeguard their righteous belief in front of defamation and mistreatment. This 20 years is a brief moment in history, but it will be well remembered in the future,” Huang said.

About 1,000 practitioners held a rally next to Queens Library in Flushing on April 20 to commemorate the April 25 appeal that took place 20 years ago. The rally was also held to support the more than 330 million Chinese who had decided to quit the Communist Party organizations after witnessing the regime's brutality against innocent people. 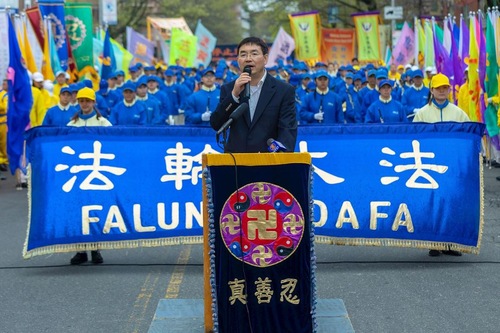 Shi Caidong was a PhD student at the Chinese Academy of Sciences in 1999. He was among the practitioner representatives who talked with officials inside the government compound of Zhongnanhai in Beijing on April 25, 1999.

Shi Caidong, then a PhD student at the Chinese Academy of Sciences, said the vicious nature of the Communist Party contributed to the persecution. At that time, the number of Falun Gong practitioners—about 100 million, far exceeded the number of Communist Party members. Out of jealousy and his desire to control people's minds, the Party’s leader, Jiang Zemin, decided to suppress the group violently.

Alan Adler, executive director of Friends of Falun Gong, said the peaceful appeal in April 1999 was an opportunity for the Communist Party to accept Falun Gong for its physical and spiritual benefits. But the Party chose to suppress the group and initiated the 20-year-long catastrophe that targeted 100 million practitioners and their families.

Yi Rong, President of the Global Service Center for Quitting the Chinese Communist Party (Tuidang Movement), said the regime had taken the lives of at least 80 million innocent people and that it has undermined traditional values and destroyed the natural environment.

“History has proven that communism is not a solution, but a path towards destruction. Only by saying no to communism can people have a great future,” Yi said.