(Minghui.org) Today's news from China includes incidents of persecution that took place in 8 cities or counties in 4 provinces, where at least 11 practitioners were recently persecuted for their belief. 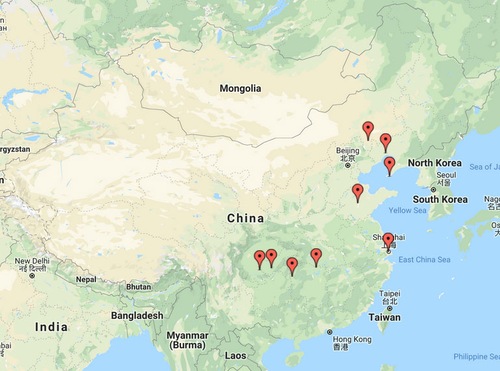 The Linghe District Court sentenced Ms. Xu Guixian to four years in prison in early March 2019 without notifying her family. She was taken to the Liaoning Province Women's Prison on March 19.

Mr. Sun Zili was arrested on the evening of November 12, 2018. The police ransacked his home and confiscated Falun Dafa books, a computer, and a printer. Mr. Sun was released that evening.

The Jinan City Intermediate Court upheld the original verdicts on March 2, 2019, without a court hearing.

Ms. Xiao Yongkang was sentenced to a four-year prison term. She appealed, but the Xiangxi Autonomous Prefecture Intermediate Court upheld the original verdict.

Ms. Sun Baoju from Huarong County, who worked on odd jobs in Changsha City, was arrested by railway police at the Yueyang Train Station checkpoint on her way to Changsha on December 25, 2018. She was taken to the Ma'anshan Police Station in Huarong County that day by Wang Zhigang, director of the Tuanzhou Police Station, and two other officers.

Ms. Sun was transferred to the Huarong Detention Center the following day, for ten days of detention. She was released after her husband paid 360 yuan for living expenses while in detention.

Ms. Chen Peiyu, a physician, and Mr. Luo Guangru, president of a hospital, live in the Jiazhou Garden Residential Community. Their homes were ransacked by the Shizhong District police on March 26, 2019.

Mr. Wu Jinggang from Bairin Left Banner was arrested at home by people led by Cheng Aimin, Party secretary of Taipingdi Village in Lindong Town, on the morning of March 29, 2019. Mr. Wu's mother, in her 70s, was also at home. These people ransacked Mr. Wu's home and took a large amount of his personal belongings and cash.

Mr. Wu's wife Ms. Zhao Chunhua was not home at that time. Her whereabouts are unknown.

Mr. Wu's mother was taken home by her daughter, while Mr. Wu was taken to the Bairin Left Banner Detention Center.