(Minghui.org) Falun Dafa practitioners in Ottawa, Canada, held a cultivation experience-sharing conference on the campus of the University of Ottawa on Sunday, April 7, 2019. During the conference, thirteen Chinese and Western practitioners talked about their experiences and understandings of cultivation. 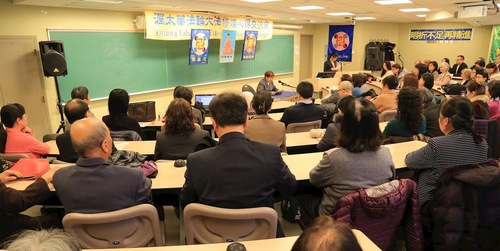 Falun Dafa practitioners from Ottawa came together to exchange cultivation experiences at the University of Ottawa on Sunday April 7.

Several speakers talked about how they apply Falun Dafa's principles of Truthfulness-Compassion-Forbearance whenever they encounter tribulations.

Ms. Wang had a conflict with the local coordinator about demonstrating in front of the Chinese embassy. Afterwards, she could not calm down and did not want to go to the demonstration.

She later had a series of tribulations. She thought, “These incidents are not coincidental. I must have attachments I need to eliminate.” Meanwhile, the coordinator saw his own problem and called Ms. Wang to apologize. Ms. Wang realized that all her anger and complaints are “wrong thoughts.”

Whenever she encounters difficulties on her way to the Chinese embassy, such as severe weather or heavy traffic, Ms. Wang recalls Master Li's poem, “Washing away all wrong thought, Buddhahood, with less adversity, is wrought”(“Nothing Kept” in Hong Yin).

She said, “I go to the Chinese embassy every Thursday and Friday. I hang up the banners, then do the exercises and send forth righteous thoughts. I've found that my experience while doing the exercises there is quite different. Although it's noisy, I'm able to reach tranquility quickly. After doing the exercises, I feel great!”

Ms. Li said in her speech that she felt unwell after sending forth righteous thoughts to help a practitioner who had sickness karma. She looked inward, and found that deep in her heart she had the wish to get healed through cultivation.

“I found my hidden attachment while helping a fellow practitioner. This experience made me realize that helping others is helping myself,” she said.

Making Sure Everyone Is Included

Ms. He talked about how she organizes the group Fa-study. She and the other coordinators pick a topic for discussion every week. To get everyone involved and give them a chance to talk, they divide the attendees into small groups of six or seven. That way, each person has a chance to talk about their experiences.

After the small group sharing, each group submits a synopsis of their discussion for the large group meeting. After they adopted this approach, the group meetings have become more dynamic, and practitioners are more engaged in the discussions.

Ms. He also talked about the Shen Yun promotion last year. Due to a tornado, they encountered some difficulties. All the practitioners shared their understandings based on the Fa and helped each other to look inward.

“During this process, we all felt that we are a whole body under Master's guidance. With Master's help, the group's strong righteous thoughts broke through the difficulties and successfully finished the promotion,” she said.

Mr. Li started selling advertisements for the Epoch Times newspaper in 2005. “This is great job, because this newspaper aims to restore traditional values and spread the truth, and it also allows me enough time to practice and study,” he said.

The newspaper faces all kinds of interference from the Chinese Communist Party, as well as financial pressures. Mr. Li believes that when he cultivates himself he can do the job well. Starting in January 2010, besides going to the group Fa-study, Mr. Li reads the Fa and does the exercises every morning. He found that his advertising sales keep increasing, and during the first three months of 2019, sales reached a record high.

Other speakers talked about how they improved their relationship with their family members and helped them understand Falun Dafa.

Ms. Xin Qihua, the coordinator of the Ottawa exercise site, said, “We received twice the number of submissions that we usually do. The quality of the papers was high, too. It shows that, as a whole, practitioners have improved in their cultivation. We all look inward and are solidly cultivating ourselves.

“On the journey of cultivation, we will be more diligent and form a whole body to help Master to rectify the Fa, save sentient beings, and fulfill our tasks as Dafa disciples.”