(Minghui.org) Today's news from China includes incidents of persecution that took place in 5 cities or counties in 4 provinces, where at least 8 practitioners were recently persecuted for their belief. 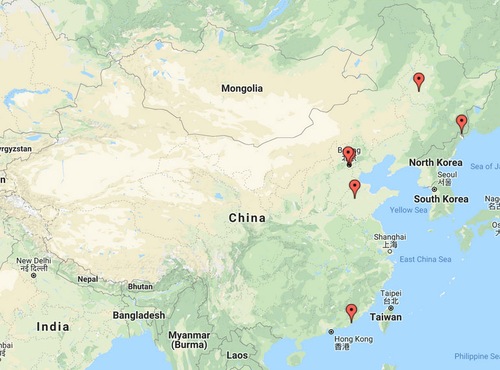 Ms. Gao Jinying, 67, was arrested by officers from the No. 3 Police Station on November 14, 2018, for talking to people about the persecution of Falun Gong. She was held at Yanji Detention Center. Her case was recently submitted to the Procuratorate.

Ms. Zhang Junling was arrested in early February 2019 by officers from the Hunchun City Domestic Security Division. She was held at a detention center.

Mr. Zhao Bingzhong from Changping District was arrested on October 11, 2017. On May 21, 2018, he was sentenced to a two-year prison term by the Fengtai District Court. In November 2018, he was taken to No. 4 Division of Xinan Education Correctional Institute located at No. 6 Qingfeng Road, Daxing, Beijing. Mr. Zhao is emaciated and his teeth have become loose due to persecution.

Dr. Kong Jie, from Fengtai District, was arrested on August 29, 2017, and sentenced to a two-and-a-half-year prison term. He is currently detained at Tainhe Prison in Daxing District, Beijing.

Ms. Wen Qing was arrested by police officers on January 30, 2019, for talking to people about the persecution of Falun Gong.

Ms. Ding Baoyun was arrested by officers from the Gaoer Police Station on January 1, 2019. She was held at the Jinan Detention Center for 15 days. She was released on January 15 only after her son was extorted of 3,000 yuan.

Mr. Wu Peiwen was arrested by officers from the Shantou City Political and Legal Affairs Committee, 610 Office, Police Department, and Domestic Security Division on November 28, 2018. His case was brought to the Jinping District Procuratorate in Shantou City.

Ms. Hao Mingmei was arrested by officers from the Chengfeng Police Department on March 22, 2017. She was held at the Daqing City Detention Center for 22 months.

Ms. Hao was tried by the Ranghulu District Court five times, sentenced a four-year prison term, and fined 20,000 yuan. She appealed to the Daqing Intermediate Court.

“Falun Dafa and My Fruit Orchard”