(Minghui.org) The history of New Year couplets dates back thousands of years in China. They usually have auspicious sayings written on them and are put up during the Chinese New Year holiday seasons to bring people good luck.

Because of the persecution of Falun Gong in China, even this tradition is being curbed. Many people who choose to post couplets bearing messages about Falun Gong find themselves at odds with the Chinese communist regime, which has been trying to eradicate the peaceful mind-body practice.

Police in Qishuzhuang Town in Hebei Province recently instructed local officials to hire people to destroy any couplets with words related to Truthfulness-Compassion-Forbearance, the core belief of Falun Gong. Escorted by township police, the hired villagers have removed couplets from over 100 homes.

These couplets were put up before the Chinese New Year season in February, either by the residents themselves or by Falun Gong practitioners with the consent of the homeowners.

Intimidated by the police and local officials, most families remained silent during the recent raid. Only a couple of families protested, saying that they liked the couplets and the phrases on them. Officials backed off and these couplets survived. 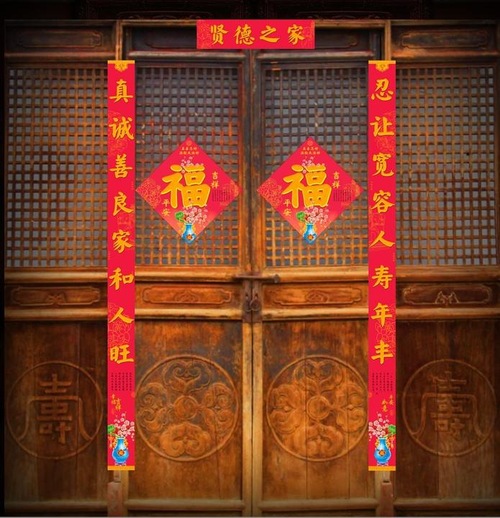 New Year couplets on a door in China. The ones on the sides say, “Truthfulness and Compassion bring a happy and prosperous family; forbearance and forgiveness yield longevity and bounty.” The one at the top reads, “Family of virtue.” 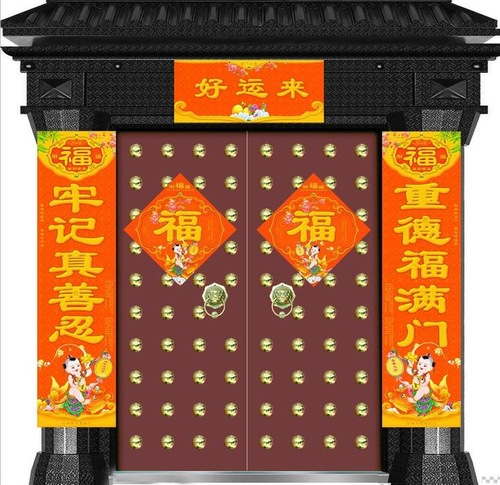 Another door in China with couplets. Phrases on the sides say, “Keeping in mind Truthfulness-Compassion-Forbearance; promoting virtue will be blessed.” The top one reads, “Good fortune is approaching.”

The day before the police led the hired villagers to go around destroying the couplets, several police officers and township officials stopped in front of the home of Mr. Guo Liqun and his wife Ms. Huang Suxin, who both practice Falun Gong.

Officer Xing Zhenhong asked where the couplets were from and if they had more. Mr. Guo replied what was written on the couplets are universal values and many people, including his family, liked the message.

“How many practitioners are there in this village?” asked Xing.

“I do not know. But I've heard Falun Gong is practiced all over the world,” Mr. Guo answered.

The officials stayed for a while and left.

Although Mr. Guo's couplets survived that day, officials came back several days later after the raid in the village. As Ms. Huang went out to see what happened, a police officer ordered her to remove the couplets since the annual National People's Congress and the People's Political Consultative Conference were about to start. (Editor's Note: such conferences are usually considered politically sensitive events and officials often intensify the persecution of Falun Gong leading up to those events.)

Ms. Huang refused to remove the couplets, saying that the two upcoming conferences had nothing to do with the couplets. “Plus they are on my door and the phrases are good. It is none of your business,” she continued.

The officers ignored her and scraped the words “Truthfulness, Compassion, and Forbearance” from the couplets.

The police returned later that day, at around 7 p.m., but left in a few minutes. When Ms. Huang stepped outside to check, she found that the remaining couplets had been covered up with black paint.

“Protecting the Goodness of Dafa”