(Minghui.org) The Croatian Parliament voted unanimously on March 1, 2019, to adopt the Council of Europe Convention against Trafficking in Human Organs, becoming the eighth European nation to ratify the treaty.

The Convention was drafted in 2015 after the European Parliament passed a resolution in 2013 condemning the Chinese regime’s “state-sanctioned organ harvesting from non-consenting prisoners of conscience in China, including from large numbers of Falun Gong practitioners imprisoned for their religious beliefs, as well as from Uyghur and Tibetan prisoners.”

The Croatian government has emphasized Croatia’s leading position in organ donation and transplantation due to an ethical and professional transplant system. By adopting the Convention, Croatia joins the initiative to strengthen international mechanisms of cooperation in the prevention and effective punishment of trafficking in human organs.

In addition to criminalizing the act of illegal organ extraction, the Convention also compels signatories to criminalize aiding and abetting in such acts and the solicitation of organ donors or recipients for illicit transplants.

Dr. Branimir Bunjac, Member of Parliament, stated during the parliamentary proceedings, “Our countrymen unwittingly participate as users of such services – they travel overseas, especially to China, to obtain organs quicker. One has to ask the question – how is it possible that there is no waiting period in China, as opposed to the European Union?”

He cited international organizations’ findings that China has carried out up to 100,000 transplants per year for over a decade despite the lack of an organ donation system.

“When you ask Chinese authorities about the source of such organs, they justify it by saying they were obtained from death row prisoners,” he said. “However, there are only 2,000 such prisoners in China annually, which is evidently not enough for such a large number of transplants.

“Six comprehensive international reports point in the direction that the most common source of organs in China are prisoners of conscience. Let’s say it openly – they are religious believers, and most of them are the practitioners of the Buddhist system of Falun Gong, followed by Christians, Tibetans, and Uygur Muslims.

“After those reports, the Chinese authorities have replied that those were black market figures. However, all transplants in China are conducted inside state hospitals, under state supervision. Therefore, such information just does not seem plausible,” Dr. Bunjac added. 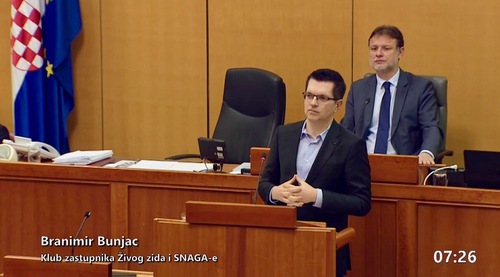 Pointing to laws passed in Italy, Spain, and the Czech Republic that prohibit their citizens from going to China to obtain illicit organs, Dr. Bunjac cautioned that adopting the Convention alone would not resolve the problem entirely.

“It is necessary to continue developing further legislation, especially bearing in mind that Croatia is at the very top of transplant medicine. As such, we should serve as an example, both in legislation and in practice,” he said.

The Croatian government has announced further initiatives to inform health professionals and the wider public about the magnitude of the issue, to enable them to recognize, prevent, and report unethical transplant practices.