(Minghui.org) Falun Gong practitioners from southern Taiwan gathered in Kaohsiung on February 17 to study the teachings of Falun Gong together and share their insights and progress in their cultivation journeys. 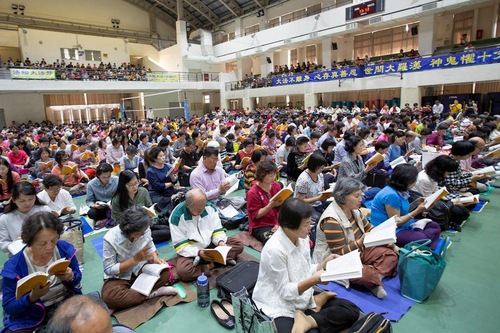 Large group Fa-study in the afternoon during the Southern Taiwan experience sharing gathering. 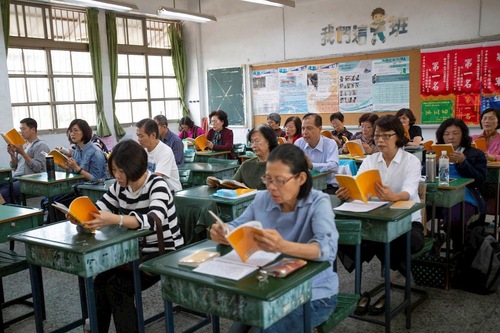 Small group Fa-study in the morning.

The practitioners came from six different counties in southern Taiwan. Several practitioners shared with the group about how they have looked inward in conflicts, improved their levels in cultivation, introduced Falun Gong to the public and raised awareness of the ongoing persecution of Falun Gong in China.

Jianyao started practicing Falun Gong seven years ago. Back then his family had just moved to a new house. From the window, he saw a group of practitioners doing the Falun Gong exercises every day, so he said to his wife, “You are always sick. Why don't you give it a try?”

To his surprise, his wife, who had suffered from chronic bronchitis for years and who coughed every night, felt much better soon after she started practicing Falun Gong. Jianyao also decided to join the group and learn the exercises.

Jiaoyao has always been a hard worker, but he used to have a short temper. If other people did things that he didn't like, he would throw a fit and argue with them, no matter whether it was his wife, children, or co-workers.

After he had been practicing Falun Gong for a while, his supervisor came to his office one day for a chat. “I have worked here for many years, and I know every employee very well. But I have never seen anybody like you, who can make such a huge change in such a short time,” his supervisor said.

Jianyao told his supervisor, “This is because I am now practicing Falun Gong. The teachings of Falun Gong are Truthfulness-Compassion-Forbearance.”

The supervisor said, “Falun Gong is great. Seeing how you have changed, I want to read the Falun Gong books too.”

Removing Attachments as a Coordinator

Lihui was suffering from a serious disease in 2011. She was depressed and felt lost. Although she was well off financially, she didn't understand the purpose of life. Her aunt, a Falun Gong practitioner, introduced Falun Gong to her. Her aunt said that the key to practicing Falun Gong is to “cultivate one's heart.” Those words touched Lihui. She was excited and felt that she had found what she had been looking for.

Lihui became happier as she progressed in her cultivation. In 2016, she became the coordinator of the local exercise site. As the coordinator, she needed to organize the morning group exercises, but it was a challenge for her because she was unable to get up early in the morning to participate.

At a cultivation experience sharing conference in the United States, Lihui heard Master Li Hongzhi lecture (the founder of Falun Gong). She felt ashamed of herself. She said in her heart to Master Li, “I was wrong. From now on, I will be more diligent in cultivation.”

A practitioner told the group at her practice site that somebody had been coming to the morning exercises and had been interested in learning, but gave up after seeing so few practitioners there.

Everybody, including Lihui, felt guilty. “We have a lot of practitioners at this site, but many practitioners often get here late,” Lihui thought. The practitioners promised each other they would take the morning exercise more seriously. They encouraged each other. Now, nobody comes late.

Lihui values group Fa-study and group exercises. When conflicts arise among practitioners, she knows that she needs to look inward for her own faults and correct herself.

“The righteous field can influence everybody,” Lihui said. “If everybody could look inward and change our own behavior, gradually the group will improve as a whole.”

Cultivating in a Marriage

Wanyi married a Japanese practitioner last June. After moving to Japan, she stayed at home each day, as is customary for a married woman in Japanese culture. She slacked off in her cultivation and spent her days surfing the internet and watching television. Only after her husband came home from work would she read the Fa and do the exercises with him. She did not know how to cook, so her husband made dinner for her, and she casually made herself something for lunch.

A few months into her new lifestyle, Wanyi realized that she was not behaving like a practitioner and decided to make a big change. She went home to Taiwan last September and asked her mother to teach her how to cook.

After her Taiwan trip, Wanyi became a different person. Not only does she cook every meal at home, but she also reads the Fa and does the exercises by herself during the day. She goes out to a tourist site by herself to talk to Chinese tourists about Falun Gong and she joined a project in which she makes phone calls to China to tell people about the persecution.