(Minghui.org) About 80 young Christians between the ages of 10 and 30 attended an inter-religious activity on Sunday, March 3, 2019, in the province of Buenos Aires, where Friar Marcos Ramirez invited Falun Dafa practitioners to teach them the exercises and explain the principles of Falun Dafa.

The event marked the 800th anniversary of the meeting of St. Francis of Assisi and Sultan Al-Malek. The participants were Christians of the Order of Franciscans from different provinces of Argentina, including Cordoba, Formosa, Santa Cruz, Corrientes, Salta, and Buenos Aires. 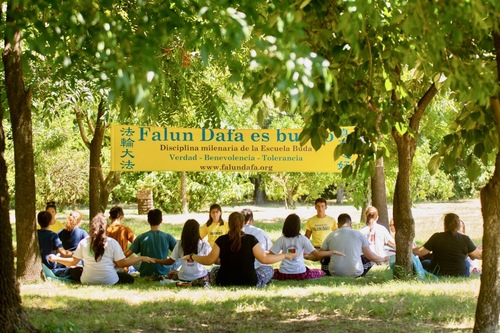 Participants at an inter-religious activity in Argentina learn the Falun Dafa meditation practice.

Three Falun Dafa practitioners between the ages of 17 and 19 taught the exercises and explained the principles of Dafa to these young participants. After being introduced to the meditation practice, many of the youths said they could experience the depth of the practice and connect with their spiritual side and the divine in a different way.

One woman commented, “I realize that there is much similarity in the importance of the divine and that meditation resembles prayer. I felt a strong connection with God even though they are different ways.”

One young man told practitioners that he had always been attracted to Eastern disciplines. He had practiced several, including Taichi and yoga, but felt that Falun Dafa is very special. He asked for details about Dafa practice groups in his city so he could continue learning.

A Franciscan nun living in Santa Cruz (in the Patagonian region in the southern part of Argentina) said that she felt peaceful during the outdoor meditation and thanked the practitioners deeply. She wanted to meet practitioners in the city where she resides. 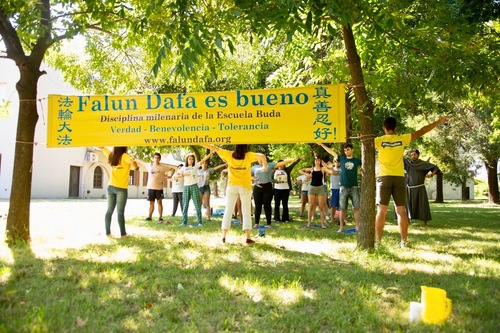 In addition to the meditation and standing exercises, the attendees also learned about the importance of cultivating oneself with Falun Dafa’s principles of Truthfulness-Compassion-Forbearance and applying these values on a day-to-day basis. 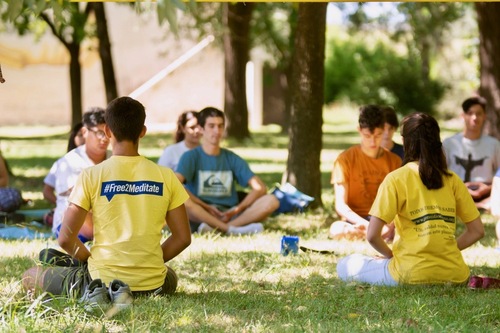 The practitioners’ shirts refer to the ongoing persecution of Falun Dafa by the communist regime in China.

Friar Marcos Ramirez, the organizer of the event, said he was grateful for the Dafa practitioners’ participation in the inter-religious activity. He also discussed today's addiction to technology and dependence on cell phones faced by many youths. He thanked the Falun Dafa practitioners who, despite their young age, were so committed to their faith and willing to share it.

Participants in the inter-religious activity rotated in groups of 20 through four different workshops. Of the four, Falun Dafa was the only one that was not Christian. Most of the attendees were initially not familiar with Falun Dafa, but they expressed much joy and peace, a great eagerness to do the exercises, and astonishment when learning of the persecution in China.