The Ruifeng Night Market is highly popular. Tourists from all over the world, as well as the locals, visit in the evenings to taste the delicious snacks and unique foods. It has become one of the “don't miss” destinations for Chinese tourists. 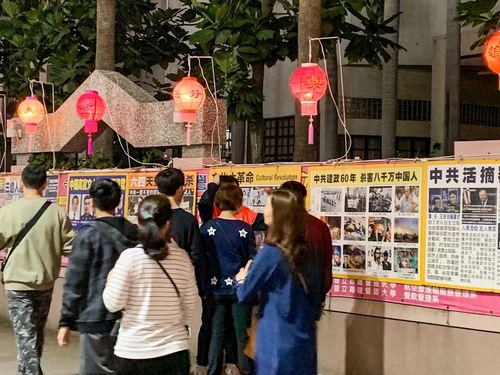 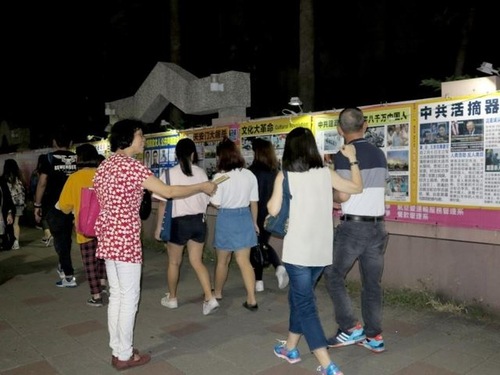 Tourists and locals look at Falun Gong posters in the Ruifeng Night Market.

For about 30 meters (33 yards) from the Kaohsiung Arena Metro Station to the Ruifeng Night Market, pedestrians on their way to the market saw posters with information and photos about the worldwide spread of Falun Gong, the Tiananmen self-immolation hoax that was staged by the CCP to incite public hatred, the state-sanctioned organ harvesting of living Falun Gong practitioners, and the lawsuits being filed against Jiang Zemin, the former head of the communist regime who started the persecution of Falun Gong.

Practitioners demonstrated the Falun Gong exercises next to the posters and handed out information. 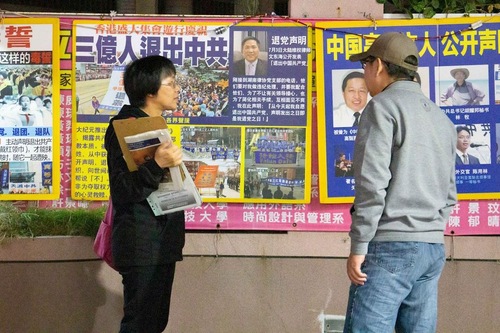 A practitioner raises awareness about Falun Gong and the persecution.

Over ten tourists from China came back from the night market one evening and paused to look at the posters that depicted the CCP's live organ harvesting.

Mr. Hsu, a volunteer said, “Good will be rewarded and evil will be punished. The CCP has committed unpardonable sins. If you are a member of the CCP, the Communist Youth League, or the Young Pioneers, I advise you to withdraw your membership to avoid being implicated in the CCP’s atrocities when the Party falls from power.”

The tourists nodded. One lady said they were Christians and added, “We believe the organ harvesting from living practitioners in China is a tragedy. We sincerely support Falun Gong. The Party will meet with [karmic] retribution for its inhumane deeds.”

Within the last year or two, almost all mainland tourists have come to believe that the CCP is responsible for the forced harvesting of organs from living practitioners. This is different from three or four years ago when it was difficult to bring up this subject with people from China.

Practitioner Hsu said, “I spoke to a group of unfriendly-looking Chinese tourists as they read the posters. They listened carefully, and several of them agreed to quit the CCP. They were smiling as they left.”

As a group of tourists from Chongqing waited for their tour bus, a practitioner talked with them about Falun Gong and the atrocities committed by the CCP. Several of them agreed to renounce the Party and looked more relaxed as they boarded their bus.

No Censorship in Taiwan

As a young lawyer viewed the posters one evening, a practitioner told her there was no internet censorship in Taiwan, so one could visit the Minghui website to learn about how people worldwide have embraced Falun Gong.

The practitioner commented that the last defense for a country is its laws, and when they fail, the result is anarchy. The lawyer agreed. She said she grew up in Tibet and was well aware of the CCP’s persecution of Tibetans. She said the Party persecutes people of faith in China and even imprisons them.

An undergraduate student, a new Falun Gong practitioner, was touring Taiwan and was happy to see the posters. He said he'd talked with his roommates about the persecution, but they didn't believe him. He took photos of the posters and sent them to his roommates. After seeing the photos, they realized that the facts were quite different from what the CCP's media publishes, and they renounced their memberships in the Party.

In one group of Chinese tourists, one person appeared to already know about Falun Gong. Surrounded by his group, he shouted to a practitioner, “Tell us how Jiang Zemin persecutes you Falun Gong!”

Mr. Hsu did not hesitate to describe Jiang's crimes in detail. The tour guide also nodded while listening. Several of the tourists quit the Party.

A Family Quits the CCP

A family of three generations, including a grandmother, a couple, and their son and daughter-in-law, were visiting Taiwan. They asked a practitioner for directions to a restaurant.

They said they had been in Taiwan several times. The son and his wife had quit the CCP during a prior visit to Hualien, and the father and mother had quit that night. They said they had taken Falun Gong informational materials during their previous trips and were well aware of the CCP’s crimes.

The son was a CCP member, the father and mother were members of the Youth League, and the grandmother was a member of the Young Pioneers. The entire family quit the Party and its youth organizations. 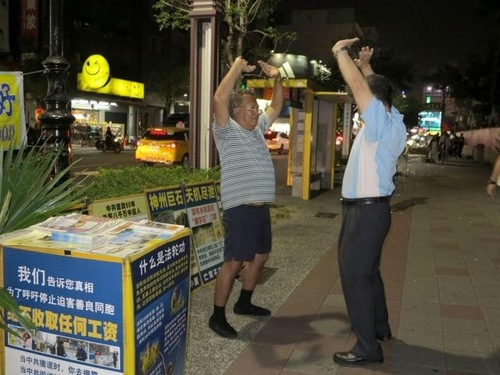 Thousands of tourists visit the Ruifeng Night Market every day, and many of them are interested in Falun Gong. The locals support Falun Gong practitioners and encourage them to keep up their efforts to raise awareness of the CCP's persecution.