Chinese Tourist: “In Every Country I Visit, I See Falun Gong”

(Minghui.org) Chinese tourists will often take the opportunity to learn about Falun Gong while abroad, and sometimes their tour guides even help out by encouraging them to interact with Falun Gong practitioners.

Falun Gong practitioners in Hualien County on Taiwan's east coast held activities in the Hualien Train Station Square on February 17, 2019. The practitioners demonstrated the Falun Gong exercises and talked to people about the Chinese Communist Party's (CCP) persecution of the practice in China. 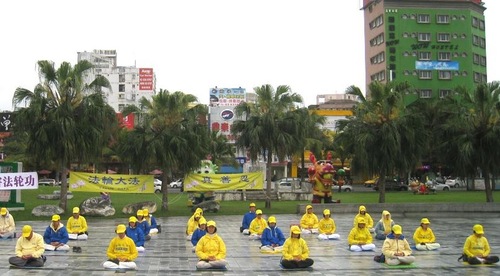 Demonstrating the fifth set of Falun Gong exercises in front of the Hualien Train Station. 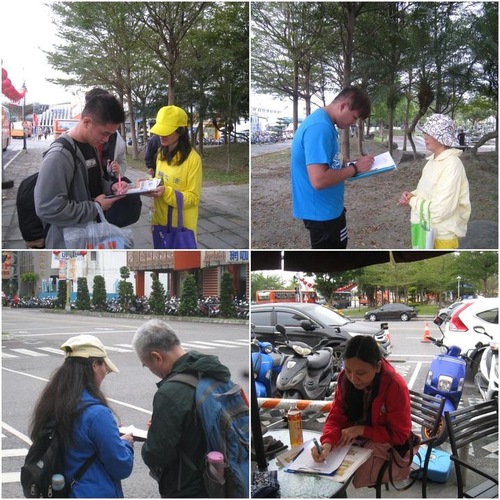 Seeing practitioners at the train station distributing materials about Falun Gong, a tour guide came over to them to ask for a copy. He said that the Chinese tourists in his group would follow his lead if he took some materials. As a result, every member of the tour group took a copy.

A tourist from Guangdong Province said, “In every country I visit, I see Falun Gong.” He said he admired the practitioners' perseverance. “I wish the innocence of Falun Gong will be restored soon as this would be best for all Chinese people,” he said.

Another group of Chinese tourists followed the movements as practitioners did the exercise demonstration. A practitioner told the group about Falun Gong's principles of Truthfulness-Compassion-Forbearance.

The practitioner also told the group how the CCP had caused the deaths of more than 80 million Chinese people in its various political movements. Some of these tourists came to understand that the communist party is fundamentally evil and agreed to renounce their memberships in the CCP and its affiliated organizations.

A law student told a practitioner, “When I was in high school, a lead teacher told all students and teachers about the CCP's persecution and the live organ harvesting of Falun Gong practitioners. He asked all of us to join the efforts against the persecution. I signed the petition then.”

He said that news reports and reports on social media indicated that live organ harvesting still continues in China. All those involved, both the instigators and the participants, have committed crimes and will be brought to justice, he said.

“Let's Treasure Our Time for Fa-Study and Cultivation”