(Minghui.org) Today's news from China includes incidents of persecution that took place in 10 cities or counties in 7 provinces, where at least 41 practitioners were recently persecuted for their belief. 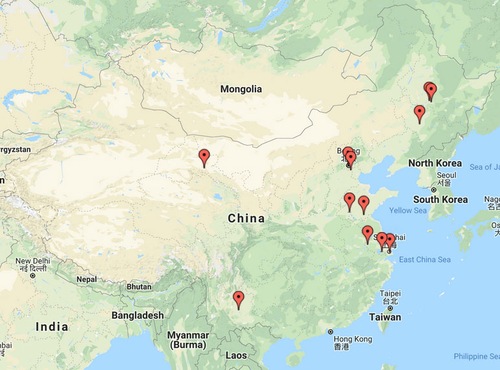 Mr. Li Peigao, 83, was arrested in early January 2019 and taken to the Yunnan Province No. 1 Prison.

Mr. Li was previously arrested by officer Qiu Xueyan from the Xishan District Domestic Security Division on November 26, 2015. He was tried by the Xishan Court on September 8, 2016, and sentenced to four years on October 8, 2016, to be served outside of prison.

Mr. Li was arrested again by officers from the Jinbilu Police Station on November 24, 2018, for distributing Falun Gong informational calendars and booklets. His home was ransacked by officers from the Xishan Domestic Security Division. He was released later that evening.

Ms. Yang Yunfang, about 75, from Taicang City was arrested by Domestic Security officers on July 20, 2015, when she used a cell phone to talk to people about Falun Gong. She was detained for ten days before being released on bail due to health reasons.

Ms. Yang was arrested again on August 2, 2015, and taken to a detention center. She was tried in the Taicang Court on August 21, 2018, and sentenced to a three-year prison term.

She was taken to the Nantong Women's Prison, where she has been mistreated. As a result, she cannot take care of herself.

Ms. Zhou Meijuan was sentenced to an 18-month prison term by the Jing'an District Court on February 1, 2019. She has been held in the Jiading Detention Center for 11 months.

Ms. Wang Ye from the Minhang District was arrested by officers from the Changqiao Police Station in the Xuhui District on January 28, 2019. She is being held in the Xuhui Detention Center for 15 days.

Ms. Cheng Xiaofu, 38, from the Shunyi District was arrested on April 17, 2014, and taken to the Nihe Detention Center. She was tried by the Shunyi Court on September 29, 2018, and sentenced to two years prison.

Mr. Ji Guoxiang was sentenced to six years in prison.

Ms. Hu Jinping, her sister Ms. Hu Jinhui from the Luozhuang District, and Mr. Gong Maohai from Mengyin County were arrested at Ms. Hu Jinping's home by officers from the Linyi Domestic Security Division in October 2018. The officers ransacked their homes and confiscated a computer, printer, and their Falun Gong books.

The three practitioners are being held in the Hedong Detention Center and have now been officially arrested.

Ms. Lian Riyan was recently reported to the authorities for distributing Falun Gong calendars. Ms. Lian and her husband were arrested by approximately 12 officers the following day and taken to a police station.

Ms. Lian's husband was released several hours later, while Ms. Lian was taken to the Yuelou Detention Center in Zaozhuang City. Her case was filed at the Rencheng District Court on January 29, 2019.

Mr. Wang Yushen and Mr. Zheng Wencai are incarcerated in the No. 3 Ward, No. 4 Prison of the Jidong Police Department.

Mr. Wang Zhanqing is being held in the No. 5 Ward, No. 2 Prison of the Jidong Police Department.

Ms. Wang from the Xincheng District, Ms. Zhang, Ms. He, Ms. Xu, and Ms. Luo have been passed to the Suzhou District Procuratorate.

Ms. Shen Qingyun was sentenced to a three-year prison term in January 2016 and taken to the Harbin Prison.

Mr. Huang Licheng was sentenced to a three-and-a-half-year prison term in June 2017 and is incarcerated in Hulan Prison.

Mr. Zhang Mingxiao from the Shuangcheng District was arrested on the afternoon of January 28, 2019. The officers tried to force him to act as an informer, which he refused to do, so they beat him severely.