(Minghui.org) Today's news from China includes incidents of persecution that took place in 10 cities or counties in 6 provinces, where at least 18 practitioners were recently persecuted for their belief. 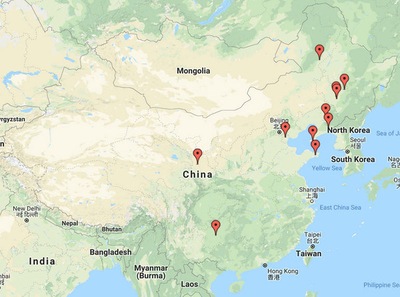 Ms. Sun Shiying and her daughter Ms. Wang Hongyan have been imprisoned for 22 months. The Chaoyang District Court tried them secretly and sentenced them to two-years-and-six-months in prison. They have appealed to the Changchun Intermediate Court.

Mr. Zhong Jianhua of Huzhu Village, Wukeshu Town was arrested at home on January 2, 2019. He was detained for 5 days.

Mr. Dong Chengjia is the former director of the Songlu Pharmaceutical Factory. He was arrested on August 24, 2017 and tried on November 28, 2018. He was released after he was tried again in mid-December and sentenced to 18 months in prison. He was imprisoned again around January 6, 2019.

Ms. Zhao Shuzhi and Ms. Ren Xiaomei were harassed again by agents from the Zalantun City Procuratorate on August 24, 2018. They were forced to flee home to avoid further harassment.

Ms. Ma Shufen, nearly 80, went out to check the electric meter after a sudden power outage at her home on the evening of December 4, 2018. As soon as she opened her door, officers from the Xinchun Police Station and the Beichen Police Department rushed in, arrested her, and confiscated many personal items. More than 40 days after her arrest, Ms. Ma is still being held by police.

Ms. Ma Xiushan was arrested on January 14, 2019 and has been held at the Benxi City Detention Center.

Ms. Wang Junying from the Dalian Development Zone was arrested on November 12, 2018, and formally arrested in December. She is being held at the Yaojia Detention Center.

Ms. Yang Wenfang was arrested around January 8, 2019. Her whereabouts are unknown.

Ms. Sun Jing was arrested by officers from the Xiaoguan Border Security Police Station on January 12, 2019 after someone reported her when she talked to people about the persecution of Falun Gong. Ms. Sun is being held at the Wendeng Detention Center.

Ms. Zhang Juhong was taken to the Yang'ai Prison after the Intermediate Court affirmed the trial court's decision.

Ms. Lu Yawen of Nong'an County was arrested by officers from the Gucheng Police Station on January 15, 2019 after someone reported her talking to people about the persecution of Falun Gong. She was taken to Changchun City. After Changchun rejected to take her in, she was taken back to the Gucheng Police Station. She was sent to Changchun again for physical exam on the morning of January 16. She is still being held at the hospital.

Ms. Wang Jingxia and Ms. Wang Fang were arrested on the morning of January 15, 2019 after they were reported for talking to people about the persecution of Falun Gong.

Liujiahe Town practitioners, Ms. Hao Rongzhen, Ms. Wang Cuilan, and Ms. Guan Xiaoxia, were arrested by Zhang Zhonghua, Liu Yuliang, and others from the Tongyuanbao Town Police Station on December 7, 2018 after they were reported when they distributed Falun Gong calendars. They were taken to the Dandong City Detention Center the same day. Ms. Hao was given intravenous (IV) injections for about 10 days when she fell sick during the detention. She and Ms. Guan were released on bail on January 11, 2019. She passed away in the early morning hours of January 16, 2019.

“Cultivate Myself Regardless of the Situation”