(Minghui.org) Falun Gong practitioners in Adelaide were invited to participate in the city's Australia Day Parade on Saturday, January 26, 2019. The event is one of the largest free events in Adelaide and celebrates what people love about being Australian while also allowing locals to showcase their own culture. Each year, the parade is followed by a concert and fireworks in Elder Park.

The parade stepped off at 7 p.m., and the crowds of spectators who had gathered along King William Road waved Australian flags as the 100 or more different groups moved north toward Elder Park.

The Falun Gong procession included a lotus float, a group of practitioners dressed in traditional Chinese costumes, and a large banner that read “The World Needs Truthfulness-Compassion-Forbearance.” The beauty of the practitioners' procession won warm applause from spectators, many of whom were Chinese-Australian families and students from China. Many Chinese spectators even cheered for the Falun Gong practitioners and gave them the thumbs-up. 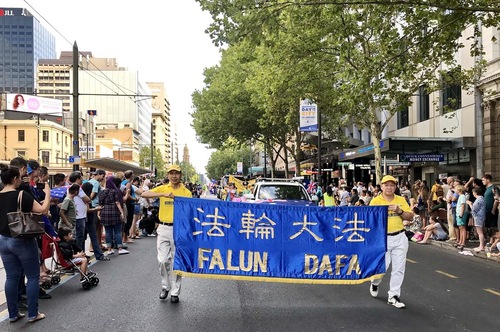 Falun Gong practitioners at the Australia Day Parade in Adelaide. 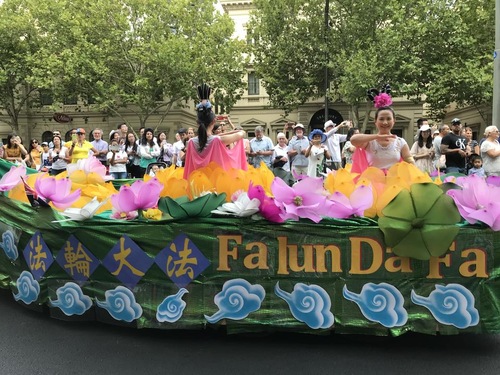 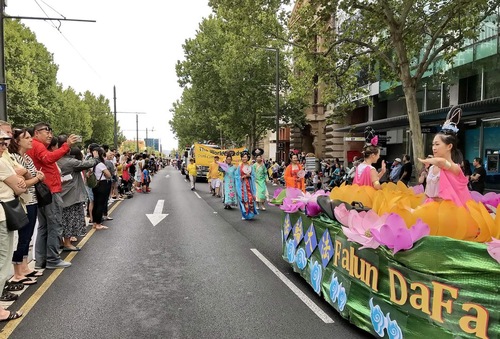 Mr. and Ms. He had traveled over from China to visit their family in Adelaide, and went with their children to see the parade. They were impressed with the diversity of cultural groups in the parade, and were especially impressed by the beauty of the Falun Gong float. “It's a great way to introduce the Eastern tradition to Westerners,” Ms. He said.

Mr. Hu from Hunan Province in China listened to a Falun Gong practitioner's explanation of how the Chinese Communist Party (CCP) fabricated the self-immolation hoax on Tiananmen Square in 2001 to incite hatred against Falun Gong practitioners. Mr. Hu said he definitely agreed that the Chinese people should follow their traditional values instead of Marxism. He agreed to quit all the communist organizations he had joined as a youth in China.

Falun Gong practitioner Mr. Zhang was happy to see that more and more Chinese people have learned the true story of Falun Gong. He told the reporter how he has personally benefited from Falun Gong. All his stubborn diseases disappeared after he started practicing, and he also had better relationships with others as a result of following Falun Gong's principles. He was grateful that Master Li Hongzhi introduced Falun Dafa to the world. 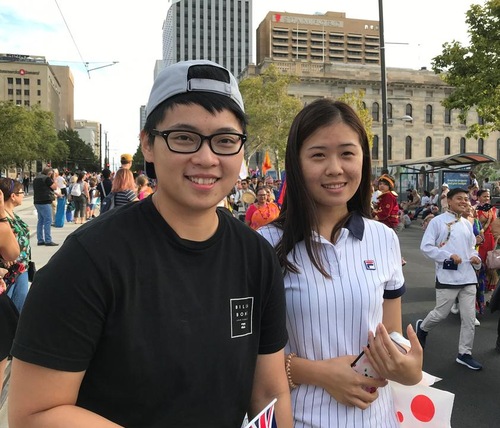 Mr. Lu and Ms. Hong from Taiwan are happy to see the presence of Chinese traditions in Australia.

A father and son from Pakistan praised the bright and gorgeous Falun Gong float, while a spectator from Indonesia saw the banner reading “The World Needs Truthfulness-Compassion-Forbearance” and said, “It's so important.” 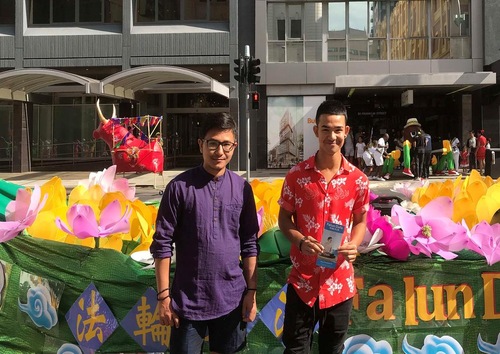 Moakn, a high school student, was happy to see Falun Gong in the Australia Day Parade.

Moakn, a high school student, told the Minghui reporter that one of his classmates had told him about Falun Gong. He knew that Falun Gong is an ancient meditation and cultivation practice with Truthfulness-Compassion-Forbearance as its guidelines. “It's wonderful,” he said.

Peter, a Chinese-Malaysian photographer, took pictures of the practitioners in Tang Dynasty costumes. He said he couldn't understand why the Chinese Communist Party persecuted such a beneficial self-cultivation practice. He told a practitioner, “Obviously, Falun Gong's Truthfulness-Compassion-Forbearance made the Communist Party afraid, and it couldn't bear Falun Gong.”