(Minghui.org) Over 500 Falun Dafa practitioners in New York gathered at Flushing on January 27 to celebrate the upcoming Chinese New Year and send greetings to Master Li. 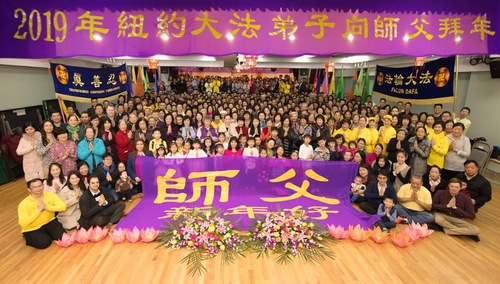 More than 500 Falun Dafa practitioners in New York gathered at Flushing on January 27. They celebrated the upcoming Chinese New Year and sent greetings to Master Li.

Performances at Taiwan Center included dance, singing, music, martial arts, waist drum, calligraphy, and more. Practitioners at the event ranged from two or three-year-old toddlers to those in their late 80s. Some of them shared the changes brought to them by Falun Dafa during the course of practice. 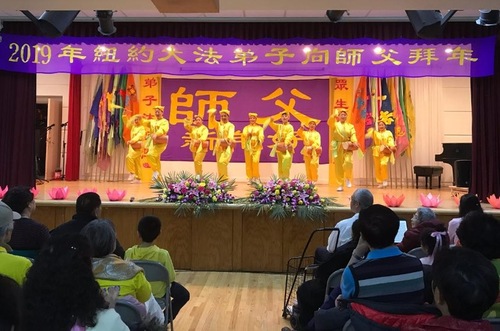 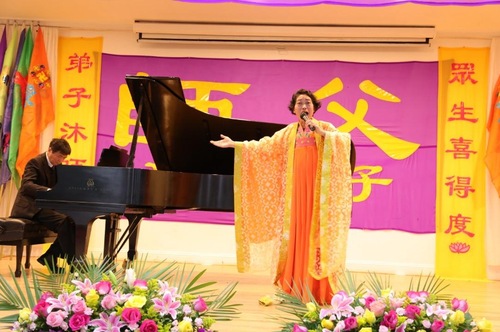 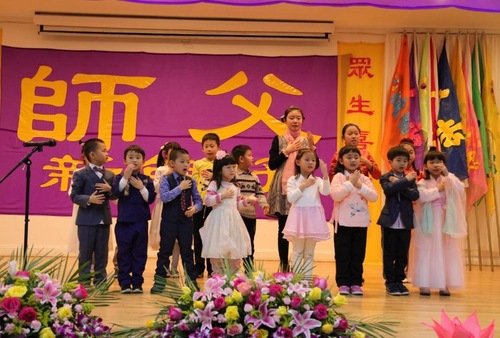 Performances by practitioners during the event.

Staying Away from Electronic Games

Su Zhongli, 24, first heard about Falun Dafa as a student in the State University of New York. “A practitioner in China chatted with me online and told me about the severe persecution against Falun Dafa in China. He also suggested that I quit the communist party organizations,” he recalled, “I figured that first I needed to find out myself what Falun Dafa is.”

From the Internet he found Zhuan Falun and other teachings by Mr. Li Hongzhi, the founder of Falun Dafa. Through reading these books, his mind was opened up, and he was also enlightened in many areas about life. “I came to understand that a person should forsake bad thoughts and bad habits. Realizing that I had been addicted to electronics, I knew it was something I should stop.”

It was easier said than done. After playing electronic games starting at age three, Su had indulged in it for 18 years. Although he did not like the violent and brutal scenes and his parents tried to stop him, he could not control himself and felt powerless. “With help from Falun Dafa, however, things became much easier,” he explained. He sold his games and has stayed away from them since then.

Wanting to tell others about the benefits of Falun Dafa, Su found YouTube videos on Tian Guo Marching Band. He decided to become a drummer in the band himself. As he was walking with other band members playing the music, his heart was filled with joy because he had gained so much from Falun Dafa.

Naeim, who works in a news organization, said that beginning to practice Falun Dafa in 2010 was a turning point for him. As his temper improved, he was willing to work harder at his job and became more considerate of others. His life changed dramatically too.

“At that point, I had not spoken with my parents for four or five years. The principles of Truthfulness-Compassion-Forbearance told me to be a good person. So I changed a lot. Seeing our relationship improving and me becoming more forgiving, my mother began to learn Falun Dafa too,” explained Naeim.

Some practitioners are very grateful for the health benefits, and among them was Ms. Liang Hongying, who immigrated to the U.S. last year. Back in China, she had heard about Falun Dafa but dared not to try it due to the suppression. Later she heard more about the practice and began to start.

“My legs were injured during an accident many years ago and the bones always had problems, making it difficult to walk or stand. Now I go to the morning exercises every day at 6 a.m. My health is better than ever,” she said.

An elderly practitioner, Mr. Yang Jianguo, was interested in qigong since he was young. He tried a few other systems before finding Falun Dafa in 1994. “When I read Zhuan Falun for the first time, I was really amazed because the book was so profound, yet easy to understand,” he added.

“As I continued to read the books and do the exercises, my health improved dramatically. People also said that I became more outgoing and better at handling conflicts,” said Yang, “I know it is Master Li who offered salvation to me and gave me so much more. Thank you Master Li, and Happy New Year!”

“Germany: Clarifying the Truth about Falun Dafa Outside the Cologne Cathedral”