Puerto Rico: Introducing Falun Dafa at Vegan Festival in the Town of Guayama

(Minghui.org) The Inter American University of Puerto Rico in the southern town of Guayama hosted a Vegan Festival where Falun Dafa practitioners introduced the ancient Chinese meditation practice, raised awareness of the persecution by the Chinese Communist Party, and launched a petition to the Honorable Samuel D. Brownback, U.S. Ambassador-at-Large for International Religious Freedom.

All who came to the practitioners’ table discovered Falun Dafa for the first time. They watched the exercise demonstration, asked questions, and read brochures and books with great interest, including The Great Way Of Spiritual Perfection.

Among the practitioners’ exhibits were several excerpts from Falun Dafa books, including a paragraph from Falun Gong in which Master Li Hongzhi teaches, “We should have a compassionate and merciful heart.” Many stopped and read it through to the end, smiled, and nodded in approval. One woman caressed the paragraph with her hand and said with reverence and admiration, “This makes me feel so good. Thank you.” 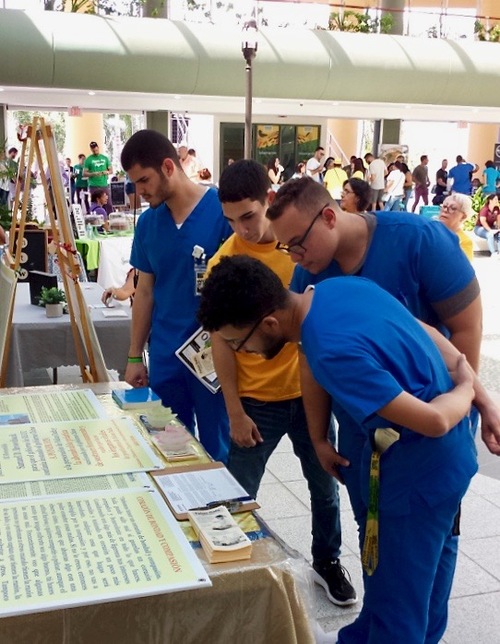 The practitioners’ exhibit included Ambassador Brownback’s declaration to the Chinese communist regime, “You will not win your war on faith.” Many visitors also stopped to read statements by the United States Commission on International Religious Freedom (USCIRF), the U.S. Department of State, and Doctors Against Forced Organ Harvesting (DAFOH). 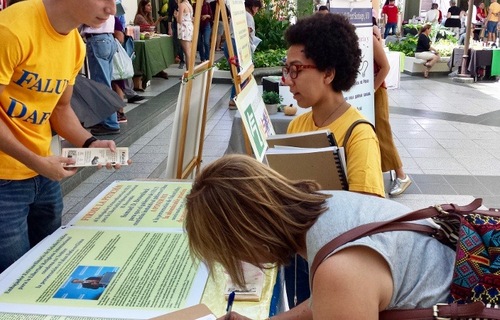 A woman signs the petition after reading Ambassador Brownback’s condemnation of the Chinese communist regime's war on faith.

Attendees wanted to know more about the persecution of faith in China and were startled and disturbed as they read about the torture, forced labor, brainwashing, mass arrests and forced organ harvesting carried out by the Chinese regime. They did not hesitate to sign the petition. 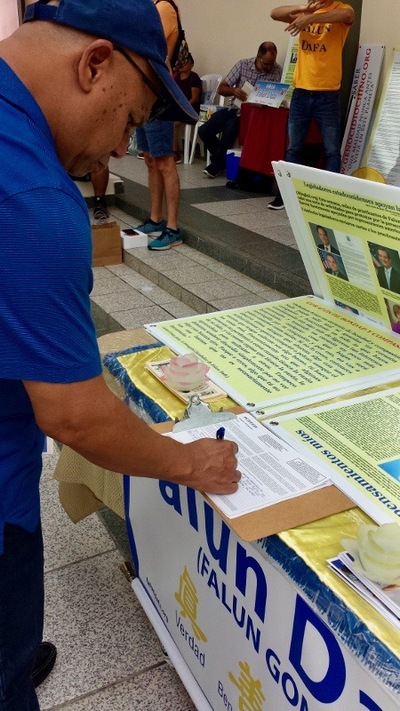 A man signs the petition after carefully browsing the information on the persecution.

One man carefully read exhibit after exhibit, exclaiming, “This is unbelievable.” He worked his way around to the petition, read it word for word, and then signed it decisively. He brought his wife over and showed her the exhibits. His wife signed the petition as well, and he thanked practitioners for their efforts to raise awareness of the persecution. 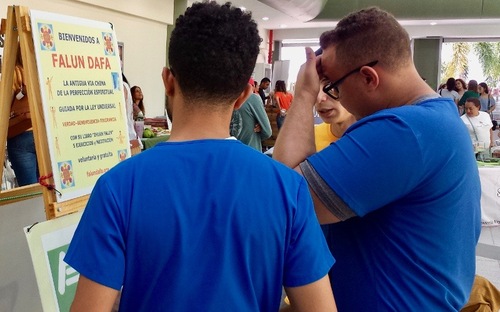 The practitioners’ booth was located near the door to the School of Nursing. Several students and teachers were appalled to find exhibits implicating their profession in crimes against humanity in China. They read attentively and were lost for words. One scholar thanked practitioners for bringing the information to their attention. 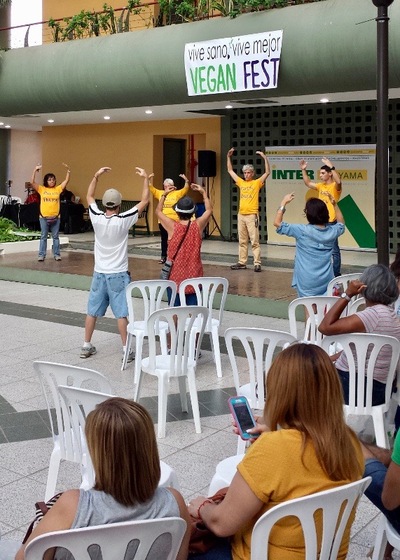 Exercise demonstration at the Vegan Festival in Guayama, Puerto Rico.

The practitioners were invited to demonstrate the Falun Dafa exercises. They explained how these slow, gentle movements can transform the body. Those who chose to try the second exercise, the Falun Standing Stance, commented afterward that the exercise left them feeling cheerful, calm and tranquil.

Several followers of the Seventh-day Adventist Church attended the festival and looked through the practitioners’ exhibits with interest and concern. They asked many questions, and were quiet and solemn as they thanked practitioners for their work.