(Minghui.org) Practitioners from the Czech Republic and Slovakia held a Falun Dafa Experience Sharing Conference on November 30, 2019, in Povazska Bystrica in northwestern Slovakia. Ten practitioners shared their experiences of applying Dafa's principles of Truthfulness-Compassion-Forbearance in their daily life. 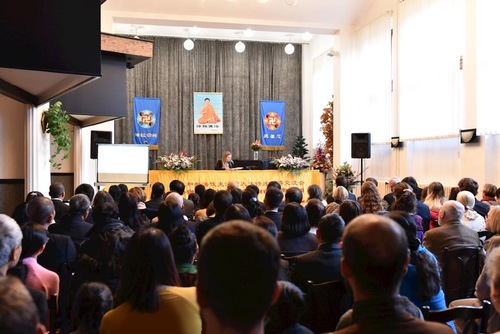 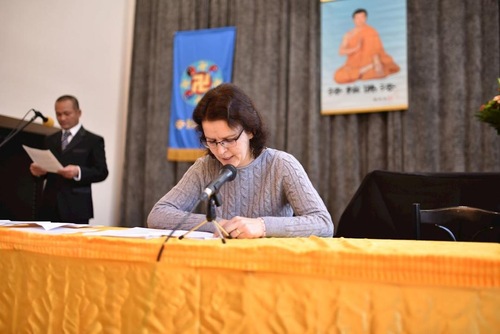 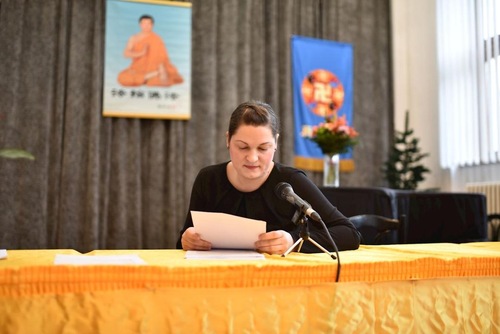 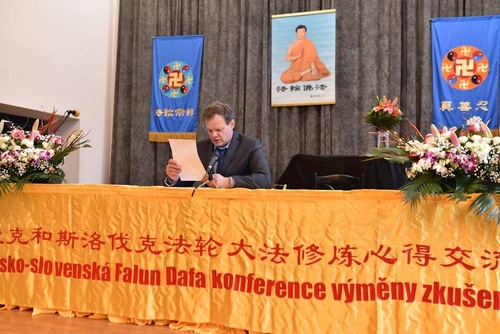 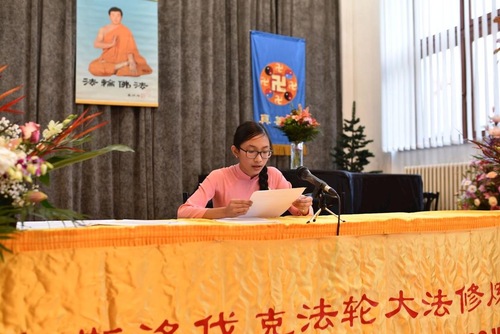 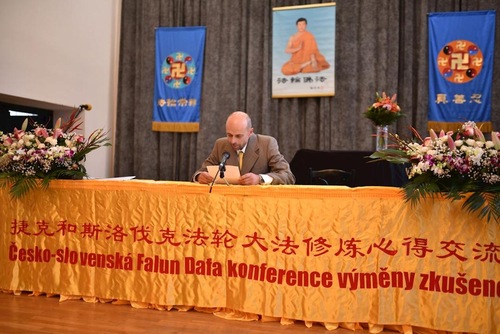 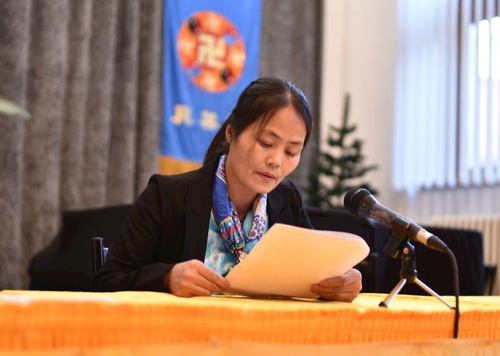 Practitioners share their stories at the experience sharing conference in Povazska Bystrica.

The Most Important Issue in Our Life

Mariana began to practice Falun Dafa about 10 years ago, and she has been working for a news media company during the past several years. This keeps her very busy, and she has hardly any free time. After some time, Mariana began to experience burnout, and hoped to take a vacation – or at least a walk. Then, she began to get frustrated, thinking that beautiful days had gone by, one by one, while she just sat in front of a computer.

Mariana recalled, “This feeling forced me to reassess my situation – why am I here and what is my ultimate goal? In the past, I had always longed for an opportunity to validate the Fa. Now, I have this opportunity, but I feel at a loss because I can't enjoy life.” This reflection pointed out many of the attachments she had developed over the years.

Through continued Fa-study, Mariana came to understand that the accomplishments she experienced by using the computer are much more important and precious than the world around her.

She said, “In fact this is a test to check whether I truly believe in the Fa, and the importance of saving sentient beings.” With that thought, she could focus on Dafa projects more, and no longer worried about taking breaks.

Although vacation time is scarce during the summer, she and some coworkers will be going to India to train a team. “The funny thing is that right now I am no longer attached to travel or warm weather. Instead, I'm constantly thinking about how to do our project better over there,” she explained.

Mariana also found that, by spending more time studying the Fa in the morning, she would have a clearer mind at work the rest of the day. For example, she could see through issues much easier and handle problems with fresh insights. “It is just like what Master said, Fa-study helps us do more with less,” she added.

Marek, an IT professional from Slovakia, talked about his human notions of being attached to reputation, and how he changed his attitude.

That started with interviews when he was applying for a job. Once, he was asked to write a simple computer program during an interview, but he could not do it, and even mixed up various software languages. The interviewer looked at him with a smile, and asked, “So, you call yourself a software developer?” Marek shared that he felt so ashamed, he wanted to disappear in a hole in the floor.

This experience made him realize that what bothered him the most was not the fact that he had trouble writing programs; rather, losing face in front of the three interviewers was the thing he feared most.

With that understanding, as a practitioner, he was able to learn from his mistakes and eliminate various random thoughts. This helped him in many aspects. For instance, gradually, he was able to introduce Shen Yun Performing Arts to more people, and he was also able to find an ideal job. Now, he can apply his newly-gained skills to Dafa projects.

Jana is a practitioner from Slovakia. Once, while she was riding with some other people in a car, she was about to send a rather contentious text message to another practitioner who annoyed her. But then, a voice in her mind said, “You cannot do that, because you are a practitioner.” At the same time, a negative thought said to her, “Go ahead and send it – it’s not a big deal.” When she attempted to send that message, it wouldn't go. Then, the car she was in suddenly bumped into the vehicle in front of them, and her cell phone flew out of her hand.

Fortunately, Jana was sitting in the back seat and she was wearing a safety belt. Nonetheless, she was shaken up, and she immediately understood that it was her anger that triggered the accident. There was no major injury, and Jana only had minor bruises, caused by the safety belt. The message had not been sent out, yet the experience was a serious warning for her. Since then, she works to control her anger whenever it surfaces.

Jana also talked about the importance of cultivating speech. In one example, shortly after she badmouthed someone, she experienced a mouth inflammation. It was difficult for her to open her mouth to speak. As Jana paid attention to this, and became more mindful of her speech, the situation improved.

Jana spoke about other attachments she is working on eliminating: competitiveness and struggle. When Jana first wanted to help a friend work through a problem, that friend was thankful. But as she wrote long follow-up emails trying to convince the friend, as well as prove to herself that she was correct, that friend refused to listen. Later on, Jana came to understand that her mindset of competitiveness was rooted in selfishness, and it was something she had to let go.

Peter from Slovakia works for NTD Television in New York. He serves as a liaison for various departments and is responsible for obtaining permits.

To be more productive at work, Peter set a high standard for himself, which requires him to work six days a week, eight hours per day. It is not easy to keep going that way, especially because his work is detail-oriented and needs constant concentration. For an entire year, he hardly ever took a break. The only two-day break he had was at Christmas. As time continued, the work seemed dull, and as a practitioner, he had to constantly improve himself and keep up the momentum.

Studying the Fa, doing the exercises, and sending forth righteous thoughts before work helped a lot. Otherwise, Peter found himself easily bothered, and sometimes unwilling to read emails – since they only meant that more problems were waiting to be resolved. When he was able to do the three things well, however, he could remain peaceful and solve problems one after another.

Another of Peter's responsibilities is training new employees, many of whom were later sent to India. This is a process that really tests his patience. Various negative thoughts often cropped up, like, “How come he doesn't know something so simple?” “I've told her the same thing several times, but she still doesn't get it!” “Why is he so lazy, or so slow?” “If he makes this kind of mistake again, I'd be reprimanded by upper management.” When these thoughts surfaced, Peter’s computer also ran into issues, and he wouldn't be able to connect to the internet. His coworkers suddenly seemed very demanding, and things almost spiraled out of control.

Through continuous Fa-study, however, Peter enlightened that he was wrong. As a result, he began to cherish every member of the team, as well as the opportunity of working with every one of them. Because of his improvement and experiences with NTD, Peter was recently promoted to a manager, and he plans to make greater contributions in this new role.

Several practitioners of Vietnamese ethnicity also shared their understandings. Among them, 14-year-old Hoang from the Czech Republic shared that the practice of Falun Dafa cured her stomach problems. To introduce the practice to more people, she took part in numerous events during which she talked to people about Dafa and the persecution in China and distributed informational Dafa brochures.

Quynh, another Vietnamese practitioner from the Czech Republic, runs her own business. “Falun Dafa tells me to be a good person, so I no longer sell any inferior and adulterated products,” she explained. Her husband initially could not understand that. With patience and compassion, Quynh was able to convince her husband that being a better person would benefit society, and their business.