(Minghui.org) Practitioners of Falun Dafa (also called Falun Gong) set up an information booth in Sydney, where they demonstrate the Falun Dafa exercises every Friday afternoon between October 25 and November 29, 2019, in one of the city's busiest commercial districts, Wynyard Park.

Practitioners also distributed brochures about Dafa and collected signatures for a petition calling on the Australian government to help end the 20-year-long persecution of the spiritual discipline in China. Additionally, they called on the government to deny visas to Chinese government officials and police officers involved in the persecution and to demand that the Chinese regime stop its killing of practitioners for organs. 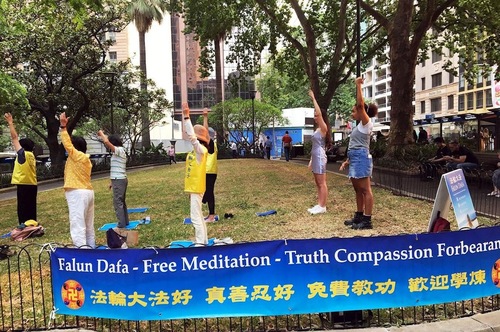 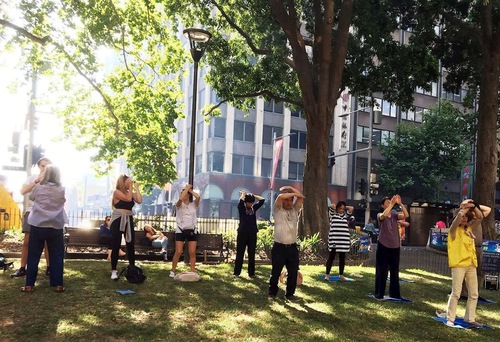 Passersby do the Dafa exercises with practitioners. 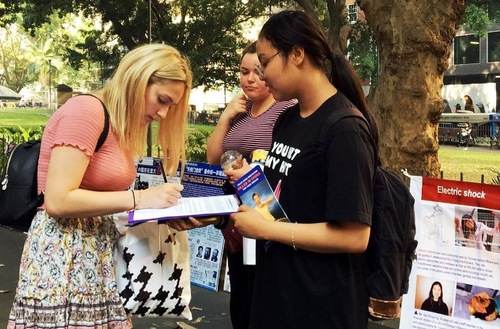 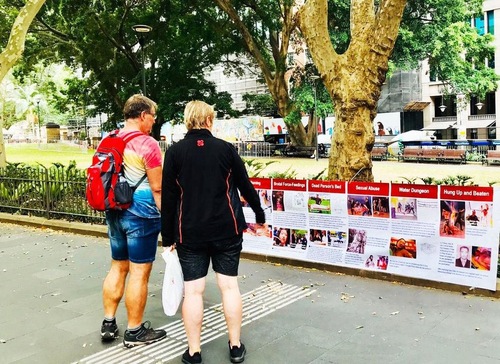 Passersby read about Falun Dafa, talk to practitioners to learn more, and sign the petition calling on the Australian government to help stop the persecution in China. 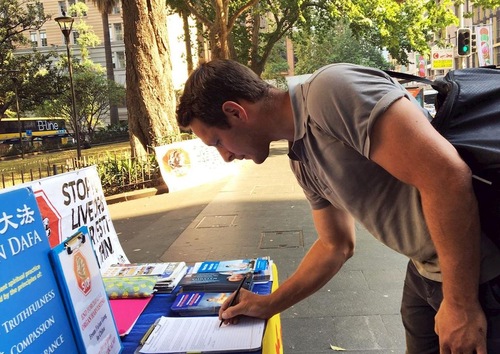 Mr. Lachlan Brown, an Australian who used to work in the banking sector, passed by the practitioners’ information booth on his way home from work. He also signed the petition urging the Australian government to help end the persecution in China.

“If I'm not wrong,” he said, “I understand that Falun Gong practitioners are tortured in China for their belief. There are many Chinese migrants living in Australia. I think it's important that our government support Falun Gong and say no to the communist regime's repression. We need to have a dialogue with the Chinese government in order to help Falun Gong.”

When he learned more details about the persecution, Lachlan said, “I now truly understand how fortunate we are to live in Australia, where we are free to pursue our religious beliefs.” He added that the principles taught by Falun Gong, Truthfulness-Compassion-Forbearance, can serve as guidance for everyone. 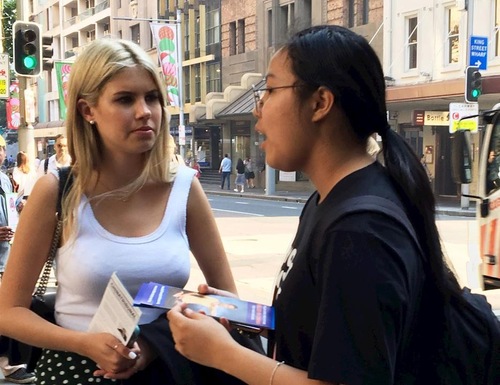 Anne Lemaire (left) listens as a Falun Gong practitioner tells her about the persecution in China.

Anne Lemaire works in marketing. She did not know much about the persecution and was shocked after listening to a practitioner explain the facts. She signed the petition and said, “It's crazy that people are persecuted for practicing a form of meditation. I must tell my friends about this.”

Tane Anton had heard about the meditation practice before. On November 8, he was in a hurry to meet his girlfriend but stopped at the display and signed the petition. He asked what he could do to help stop the atrocities perpetrated by the Chinese regime. A practitioner suggested that he tell his friends about the persecution and post information on social media.

People Want to Hear about the Persecution 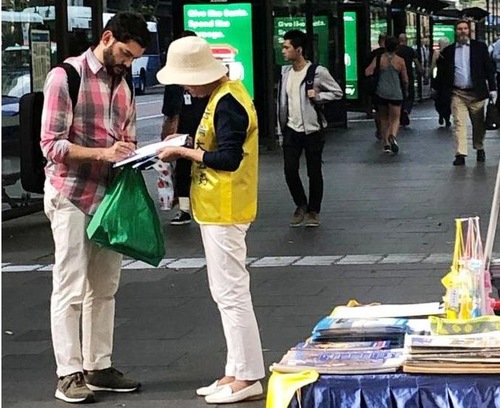 Mr. Miguel Duque signed the petition, took a brochure, and asked for more information about Falun Dafa. Practitioners told him that he could learn the exercises, read the teachings, and listen to audio lectures on the Falun Dafa website at no cost. He said he will search the internet for more information.

Amelia Allan said she did not know much about Dafa but supported practitioners’ peaceful resistance against the persecution. She signed the petition and asked for additional information about Dafa.

Three young men from China vacationing in Australia passed by the booth on November 29. One of them listened as practitioners cleared up some of the misconceptions he had about the practice due to slander by the Chinese regime. He asked practitioners how he could learn Falun Gong and was given a website address to download materials to learn the practice.

“The Last Shen Yun Ticket Leads Me to Dafa Cultivation”