(Minghui.org) The eighth Bulgarian Falun Dafa Experience Sharing Conference was held on December 15, 2019, at the signature Trimontium Hotel in the Bulgarian city of Plovdiv, known also as the European cultural capital. More than 50 Bulgarian practitioners attended the conference, and drew inspiration from each other to improve in their cultivation by following the Falun Dafa principles of Truthfulness, Compassion, and Forbearance.

The accompanying events started on the morning of December 14 with an exercise demonstration in Simeonov’s Garden in the city center. At around noontime, a petition was circulated calling for Jiang Zemin, the former Chinese Communist Party leader who initiated the persecution of Falun Dafa, to be brought to justice, at two locations in downtown Plovdiv. Passersby picked up informative flyers. Some took the time to learn more about the persecution and showed their support for the petition and the efforts to stop the 20-year-long persecution of Falun Dafa in China. 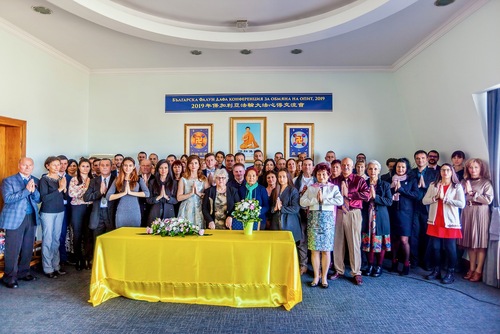 Two women who were in their 80s commented that even though they saw the exercise demonstration and read the flyers, they were hesitant to sign the petition. One said, “What can we do at this advanced age? Nothing is up to us.” A practitioner answered that age was just a number and doesn’t really matter when it comes to defending innocent people. She noted that while one person’s individual act perhaps can’t do much, combined together these individual actions can have a huge impact. Both ladies signed the petition and shared memories about their communist past. “We were lied to—we were promised a better life, but it just got worse.”

A former drug addict, who had embraced spirituality, also signed the petition after a long talk with one of the event organizers. He was glad that Falun Dafa practitioners promoted compassion.

After doing the Falun Dafa exercises early the next morning, the conference began at 10:00 a.m. with a veteran practitioner who spoke about her cultivation experiences for the first time. She explained how difficult it was for her. Over the years she realized how pure and precious the environment of Falun Dafa practitioners is. She emphasized the importance of righteous thoughts and the Falun Dafa principles of Truthfulness, Compassion, and Forbearance for the success of Dafa projects in awakening people. 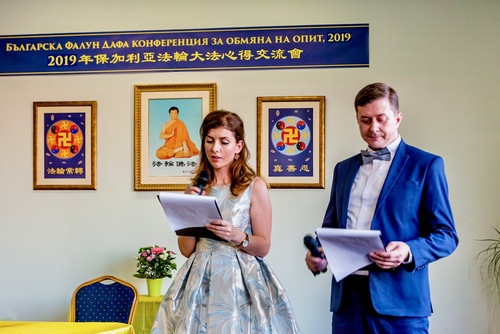 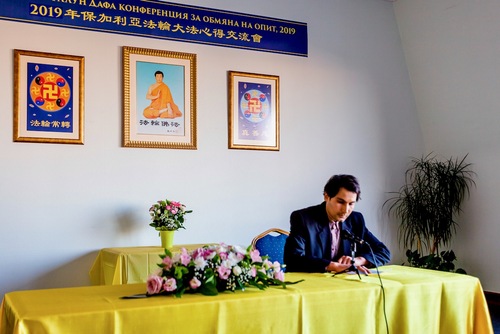 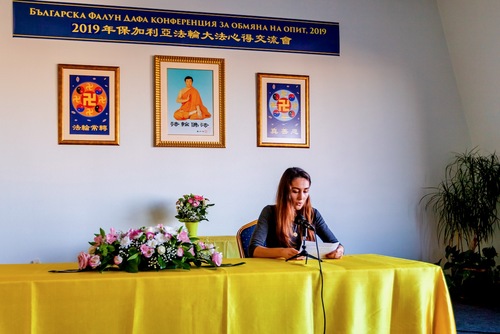 A married couple, who also hosted the event, spoke from their own perspectives about the marital crisis they overcame together. They understood how ample righteous thoughts and ridding themselves of attachments—like selfishness, vanity, and not caring enough about other people—helped them resolve the huge tribulation on their paths of cultivation.

A serious challenge in cultivation was also discussed by the Falun Dafa Assistance Center coordinator from a Bulgarian city. As an ordinary person he had big attachments to money and business, and a few years ago when he started his own enterprise, those human attachments resurfaced. He was in a major accident, which resulted in serious burns all over his body. Thanks to intense righteous thoughts, his condition improved remarkably fast and he managed to put his cultivation in Falun Dafa first and foremost.

Another practitioner from the region of the Rhodope Mountains had a similar experience. She harbored incorrect thoughts about two practitioners involved in the Falun Dafa website. Soon after, she was involved in a car accident, which she recovered from in no time. She wrote, “According to the doctors, the speed at which my broken pelvis healed was a medical miracle.”

Many young practitioners also shared their cultivation experiences. Nicole from the city of Varna looked within and found an attachment to reputation, which kept her from talking to people about Falun Dafa because she was afraid of being criticized for her actions.

Another young practitioner described how in the process of getting married to his girlfriend, he found that he was attached to competing with his father, and had sentimentality toward his mother.

A veteran practitioner talked about having difficulties solving problems caused by her husband’s previous marriage. Her heart with filled with resentment toward him, but the situation gradually improved after she managed to deliberately transform the resentment into compassion.

A young practitioner from the city of Sofia shared his difficulties in clarifying the truth to people. He wanted to take his friends to the practice site, and for two days he was faced with a number of obstacles. When he realized that he should be determined in his mind, they all eventually managed to do the exercises with the other practitioners in Sofia’s South Park. 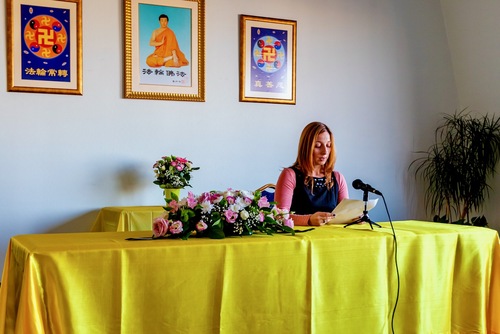 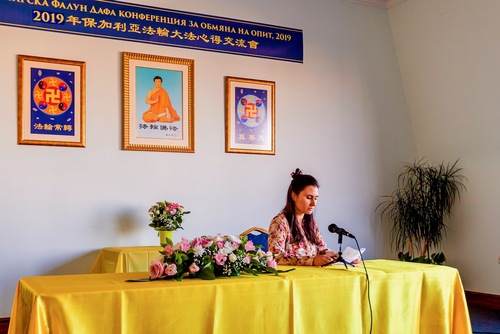 A practitioner from the hosting city of Plovdiv recited a poem she wrote in honor of Mr. Li Hongzhi – the founder of Falun Dafa:

Not all the secrets are to be told,I dwell in Your words of gold,Because of the spirit - pure and bold!

You gave me a home in heights not ever seen,I found enchanted depths I’ve never been!

My feet were bare,I was confused and thirsty,,,Lost in sin in the midst of the world was a dare!

My soul made of mornings, soaked in dewWas not abandoned even for a moment by You!

Your everlasting words,Had me rise in a splash of colors.And everything turns into good and glorious!

There it is – I see Your smile is sheer,The radiant rainbow of the Spring is here!

“Belated News: Jiangsu Man Dies Days After Being Released from Prison in 2009”