Tapestry Factory Manager Dies After Years of Persecution for His Faith

(Minghui.org) The manager of a tapestry factory in Wendeng City, Shandong Province passed away in late November 2019, after suffering years of persecution for practicing Falun Gong. He was 64.

Because he refused to renounce his faith, Mr. Tian Shihong was repeatedly arrested and detained. His factory also suffered tremendous financial losses.

Mr. Tian managed the tapestry factory for decades. During the 1990s, the factory suffered declining revenue due to the economic depression. He worked hard day and night, trying to save the factory, only to see his own health worsening over time.

A friend later introduced him to Falun Gong. Not long after he took up the practice, he became very energetic and regained his health.

Mr. Tian lived by Falun Gong’s principles, “Truthfulness, Compassion, Forbearance,” and also used the values to guide his over 100 workers.

The whole factory took on a new look and the revenue of the factory was on the rise. Mr. Tian in turn provided more benefits to the workers, such as improving the quality of the factory-provided lunch and renovating the workers’ factory-assigned apartments.

Many workers were very grateful to him and identified with Falun Gong’s principles. They stood up against the police several times in the later years when they attempted to arrest Mr. Tian.

Mr. Tian was arrested on January 22, 2001, when he went to Beijing to appeal for the right to practice Falun Gong. He was beaten, verbally abused, and deprived of sleep.

He was detained for seven days. After he returned home, he learned that Cai Desheng, the head of the local police station, broke into his home in the middle of the night and extorted more than 7,000 yuan from his family. The authorities also monitored him afterward and didn’t allow him to leave out of town.

Mr. Tian was arrested again in March 2003 and held at a brainwashing center for two months, during which time he was forced to watch videos slandering Falun Gong every day.

Mr. Tian was arrested on May 9, 2004 for putting up informational materials about Falun Gong. He escaped and was forced to live away from home. The police harassed his workers, ransacked his home and confiscated his daughter’s computer.

He was reported to the police when he returned to the factory two months later. About thirty police officers came to his factory and attempted to arrest him.

More than sixty workers stood up for him and resisted the arrest.

More police arrived and beat the workers. Some had injuries on their faces and some fainted.

Mr. Tian was still arrested in the end.

The workers later appealed for Mr. Tian at the local petition office. They waited for more than two hours, only to be violently scattered. Ten mid-level managers were held in detention. One person in his late 70s and a woman with a child were fined 200 yuan each before being released.

Given Three Years of Forced Labor For His Faith

Mr. Tian was given three years at Wangcun Forced Labor Camp on July 8, 2004. The labor camp accepted him despite his high blood pressure. He was subjected to rounds of abuse and brainwashing. He was released three months later, after his blood pressured reached dangerously high levels.

Mr. Tian was stopped at the train station on March 5, 2005, when he was about to go to Beijing for a business trip. He was held at the local police station for three hours.

Workers Stand Up for Mr. Tian

Mr. Tian refused to comply and asked for their names. Some officers hid their police badges in response. Chief Wang Yong scolded his officers for not working hard and handcuffed Mr. Tian himself. He then dragged Mr. Tian downstairs.

The commotion alarmed Mr. Tian's workers, who came to surround and protect him. His wife arrived at the factory and questioned the police why they wanted to take her husband away. 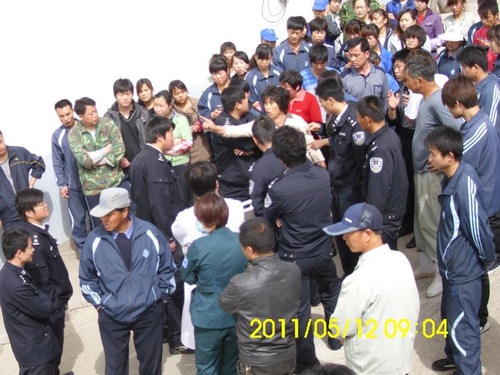 Workers stopping officers from taking Mr. Tan Shihong away in 2011

One female agent said they were just going to have Mr. Tian attend a study session at the local brainwashing center. Mr. Tian's wife and workers firmly refused to have him taken away.

The police eventually retreated after hours of standoff. They, however, continued to monitor and harass Mr. Tian in the years that followed.

Prior to the Shanghai Cooperation Organization (SCO) held in Qingdao (about 140 miles from Wendeng) on June 9-10, 2018, a car with a camera parked outside of Mr. Tian’s home between June 9-12. On June 13, another camera was set up by the local police, facing the entrance of the factory.

Factory Manager is Abducted, Over 60 Employees Come to His Defense and Are Also Persecuted

Snapshot of Falun Gong Practitioners Whose Copies of Lawsuits Against Jiang Zemin Were Received by Minghui on July 5, 2015

“Two Hunan Residents Sentenced for Their Faith, With One Receiving 7 Years”