(Minghui.org) Falun Dafa practitioners in Puerto Rico recently participated in Old San Juan’s annual “Festival de Pascuas” celebration. The festival is a cherished tradition that entails buying handsome poinsettia plants (pascuas) to decorate for Christmas. Old San Juan’s main avenue, among buildings dating from the 1500s, is filled with food and craft booths for two days. Thousands of people from all over the island celebrate the arrival of Christmas with traditional songs and music as they shop for handmade gifts and those “just right” pascuas.

The Falun Dafa booth was prominently located right in front of the main flower stalls. As people headed straight to the poinsettias to carefully select one to take home this year, they glanced at the Falun Dafa display and asked what was being sold. Many seemed surprised to see a spiritual practice at this Christmas festival – and they lingered to look around.

As a nun hurried by, a practitioner managed to suggest that she take a closer look at the exhibit, saying, “You’ll see how important this is.” The nun stopped and read some of the teachings by Master Li Hongzhi, the founder of Falun Dafa, including “We should have a compassionate and merciful heart.” She noticed the petition to the Honorable Ambassador Samuel D. Brownback, U.S. Ambassador-At-Large for International Religious Freedom, asking the ambassador to continue urging the Chinese government to stop its brutal persecution of Falun Dafa practitioners and other prisoners of conscience. She signed it right away and said she was glad that she stopped. 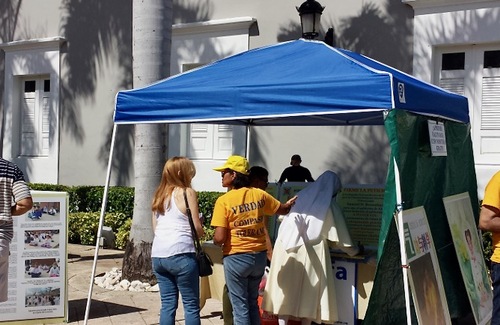 A nun, pleasantly surprised to find a spiritual practice at the festival, signed the petition asking Samuel D. Brownback, U.S. Ambassador-At-Large for International Religious Freedom, to continue urging the Chinese government to stop its brutal persecution of Falun Dafa practitioners and other prisoners of conscience.

A woman in a wheelchair read a Dafa brochure and asked about the exercises. Invited to try one, she did the Falun Standing Stance exercise seated in her wheelchair. Asked how she felt afterward, she said, “I felt the current – it came through me,” she said, demonstrating with her hands a movement from above and towards her head and down her body. “I feel… balanced, calm, very nice, but… how much will this cost?” The response was, “It will cost… only one smile.” She looked up with a radiant smile, “Really?” 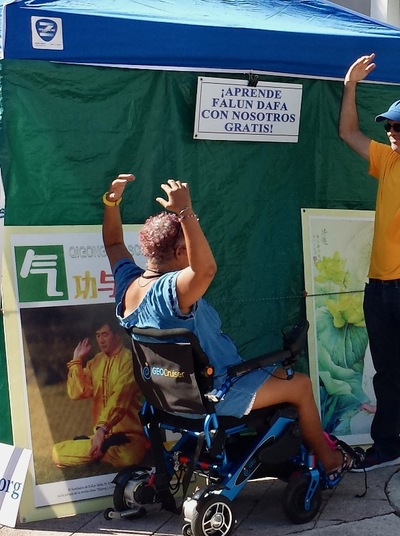 A woman in a wheelchair tries the Falun Standing Stance, “I felt the current – it came through me.”

Several joggers studied the exercise instructions – they had heard of qigong, but this was their first encounter with Falun Dafa. They asked many questions and took brochures.

People read the exhibits, signed the petition, and watched the exercise demonstration. Many commented that this was their first encounter with Falun Dafa and the first time they had seen information on the persecution of faith in China. They expressed their concern and their thanks for making something so serious and important available at the festival. Others were disturbed upon learning about the persecution of Falun Dafa in China and read everything available, asked questions, and didn’t hesitate to sign the petition. Some quietly read all the exhibits and commented that they had seen none of the information in the popular media. 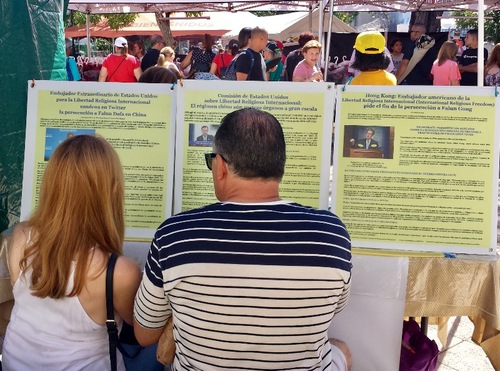 A couple reading about the condemnation of China by the Honorable Ambassador Samuel D. Brownback and the United States Commission on International Religious Freedom.

Several mothers wanted to know if children could practice Falun Dafa. Others couldn’t believe that Falun Dafa was being persecuted, and called over other members of their families to take a look. Some felt they had to share what they had discovered and took photos to share with family and friends at home.

It didn’t escape the attention of a few people that Falun Dafa was the only booth connected with the spiritual side of Christmas. Master Li’s words on compassion and mercy, and the focus on freedom of faith, seemed to touch people’s hearts. They often mentioned the something “special” they remembered in the traditional Christmas celebrations of their youth.

The festival organizer commended the practitioners, saying that he had expected just some exercise demonstrations, “But, you’ve got human rights issues here, and kindness.” He expressed his thanks for their participation in the festival.

A Christmas celebration in Puerto Rico always features a visit from the Three Wise Men. As they passed the Falun Dafa booth, they called out, “Merry Christmas!” 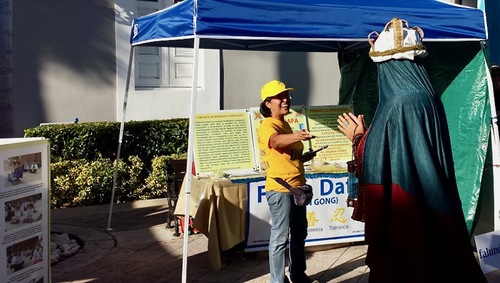 One of the Three Wise Men calls out, “Merry Christmas!”

“Shandong Woman Scheduled to Appear in Court for Her Faith”

“Kindergarten Teacher Incarcerated for Her Faith, Dies in Agony”