(Minghui.org) Today's news from China includes incidents of persecution that took place in 6 cities or counties in 6provinces, where at least 7 practitioners were recently persecuted for their belief. 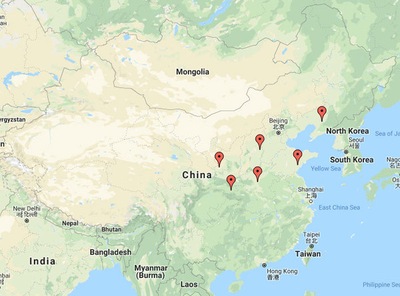 Mr. Dong Guighang from Zhaojiazhuang Village, Linjiacun Town was arrested on August 7, 2019. He was sentenced to a three-year-and-three-month prison term and fined 5,000 yuan by Gaomi Court. The trial was not open to the public, and his family weren't notified as required by law.

Ms. Li Xiulan, over 60, from Taiping Town, was arrested by officers from Taiping Police Station in July 2019. She has been sentenced to a three-and-a-half-year prison term.

Mr. Yu Yongman was arrested on November 15, 2019, while he was reading a Falun Gong book at another practitioner’s home. He is being held in Liaoyang City Detention Center.

Ms. Wang Dianxun was arrested by officers from Zhongxinglu Police Station on the evening of November 18, 2019. The Zhongyuan Store surveillance camera spotted a person distributing Falun Gong fliers. Police suspected it was Ms. Wang, and arrested her.

She is being held in Ye County Detention Center.

Ms. Kan Guangying was reported to the police for talking to people about the persecution of Falun Gong. She was arrested by officers from Hanbin District Domestic Security Division, and her home was ransacked.

Ms. Kan has been held in Jiangbei Detention Center for two months, and is not allowed family visits. Guards also refused to accept clothes that her family brought for her.

“Guards’ Order Inmates to Torture a Woman in Her 60s”