(Minghui.org) A rally to “Guard Human Rights and End Persecution” was held in Hong Kong on December 8, 2019, just ahead of the 70th International Human Rights Day. Falun Gong practitioners gathered on Edinburgh Square and called on Beijing to end its 20-year-long persecution of practitioners in China.

Influential politicians from Hong Kong and Taiwan spoke at the rally to show their support for practitioners’ efforts to end the persecution. 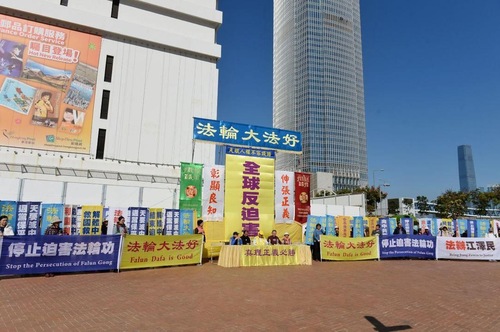 Falun Gong practitioners held a rally on Edinburgh Square in Hong Kong on December 8, 2019, to protest the ongoing persecution in China. 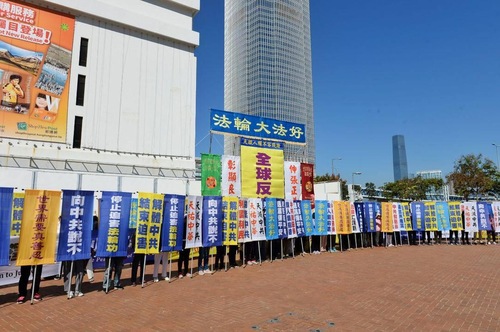 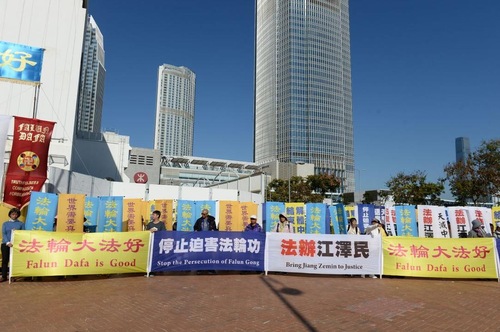 Falun Gong practitioners held up signs, banners, and posters at the rally calling for justice and demanding that Beijing immediately end the persecution of Falun Gong.

Practitioners exercised together in the morning. They then held up signs, banners, and posters to get the rally started.

Mr. Kan Hung-Cheung, spokesperson for the Hong Kong Falun Dafa Association, spoke at the rally. He said that the world can recognize the CCP’s evil nature through its suppression of democracy and freedom in Hong Kong.

“What has happened in Hong Kong shows exactly how far the CCP will go when it comes to cracking down on its people, including Falun Gong practitioners,” he said. “The persecution of Falun Gong is one of the biggest human rights disasters of this century.”

The CCP Is Coming to an End

Mr. Kan called on people of the world to increase their efforts to “help to stop the persecution and bring the culprits to justice.”

He hoped that people everywhere would play their parts to “peacefully bring an end to the communist organizations and bring a positive light to China and the world.” 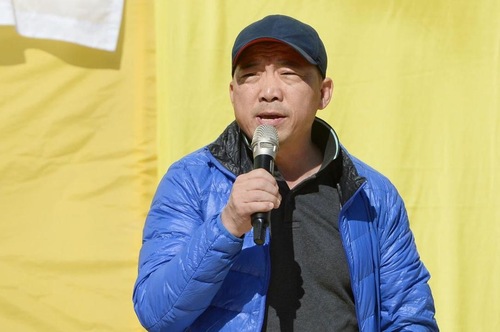 Mr. Wu Chi-wai, a Hong Kong legislator, condemned the CCP’s indifference to its people’s welfare. He called the CCP out for using weapons and political power to hurt law-abiding citizens. 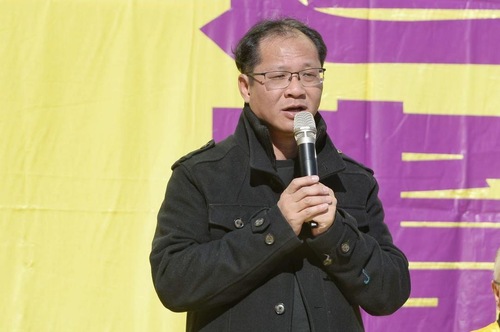 Richard Tsoi speaks at the rally

Richard Tsoi, Vice Chairman of the Hong Kong Alliance in Support of Patriotic Democratic Movements of China, said Falun Gong is currently the most severely persecuted group in China.

Mr. Tsoi praised Falun Gong practitioners for their peaceful and rational protests over the past 20 years. He also thanked practitioners for supporting the people in Hong Kong during their fight for freedom and democracy amidst the turmoil of the anti-extradition law movement.

World Peace After the CCP's Dissolution

Ms. Yi Rong, Chairwoman of the Quitting the CCP Global Service Center, stressed that Chinese people must quit the CCP to dissolve it and end the persecution.

“The CCP must be eliminated before the Chinese people can enjoy their God-given rights and international society can realize world peace,” she said.

Mr. Lee Chun-yi, another Taiwanese legislator, demanded that the CCP end its persecution of Falun Gong and its forced organ harvesting from living practitioners.

“We want the world’s people to know that such things have indeed happened. We want the international society to pay attention to it,” he said.

Mr. Lee said China is “the place with the least human rights on earth.”

Albert Ho, chairman of the Hong Kong Alliance in Support of Patriotic Democratic Movements of China, said that China creates human rights catastrophes “with religious persecution being the worst.”

“Falun Gong practitioners have been subjected to all conceivable forms of torture since 1999 and their organs are snatched from them while they are still alive,” he said.

Mr. Ho asked that the people in Hong Kong fight for human rights to “protect ourselves and fight for our next generation.”

He hoped that China would honor the United Nations' Universal Declaration of Human Rights and respect Falun Gong and all other religions.

“A Better Understanding of Tolerance”