(Minghui.org) Today's news from China includes incidents of persecution that took place in 14 cities or counties in 10 provinces, where at least 43 practitioners were recently persecuted for their belief. 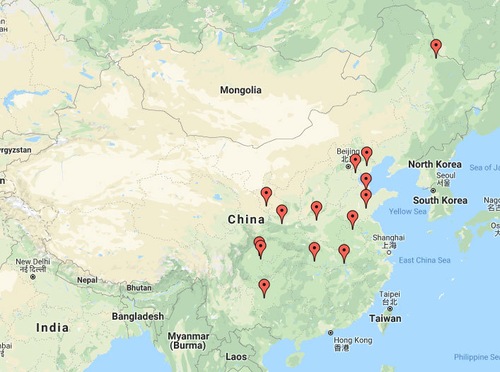 Mr. Liu Shuping from the Wuqing District was arrested, and later released due to health problems. He has been constantly harassed and threatened by officers from the Huanghuadian Police Station. As a result, he was forced to leave home and become displaced.

Ms. Zhang Guifang was harassed and arrested at home by several officers from the Sunwu County Domestic Security Division and the Hongqijie Police Station on October 18, 2019.

Ms. Zhang was taken to the police station, and interrogated. She was released later that evening, on the condition that she not to go out while serving five days of detention at home. She was also fined 500 yuan.

Ms. Dai Shuyun, in her 70s, from Guozhuang Village, Jianchangying Town, was arrested on the morning of September 24, 2019, for talking to people about Falun Gong. She was taken to the Yanggezhuang Police Station.

Over a dozen officers from the Yanggezhuang Police Station and Jianchang Town Police Station ransacked her home and confiscated a copy of Zhuan Falun and an MP3 player.

The police later called Ms. Dai's daughter and daughter-in-law to the police station after Ms. Dai experienced severe physical discomfort. She was taken home by her family that afternoon.

Ms. Du Aixiang, 70, was arrested on August 19, 2019, and was officially placed under arrest less than 15 days later. Her pension has been suspended. She is being held in a detention center, and her family has not been allowed to visit her.

The following practitioners are being held in the Suzhou Prison.

Ms. Shen Jinye, 78, and Ms. Shen Jinfang, 61, from Konglong Town, were reported to the authorities on the morning of October 4, 2019, for talking to people about Falun Gong. They were arrested by two officers later that morning, and were interrogated for over six hours in Konglong Police Station.

Ms. Shen Jinye was released that afternoon. Ms. Shen Jinfang was taken to the Huangmei County Detention Center. She has since returned home.

Ms. Wang Qiong and Ms. Man Shujun were arrested by officers from the Haoxue Police Station and the Chaoyang Police Station, Shashi District, on the morning of August 12, 2018. They were tried by the Jiangling County Court on August 9, 2019. No verdict was announced in court that day. They are being held in a detention center.

Ms. Shao Lian was arrested on August 28, 2019, and officially placed under arrest on October 8.

Mr. Zhang Hui was arrested at home by the Anshun Development Zone police on the afternoon of September 20, 2019. The place was ransacked. He was taken to the Anshun City Rehabilitation Center.

Ms. Liao Xiaoquan, 67, was arrested by several officers from the Fuyuanlu Police Station on the morning of April 19, 2019, when she went out for grocery shopping. The officers grabbed her keys and ransacked her home. They confiscated Falun Dafa books and printed materials.

Ms. Liao was interrogated in the police station, before being transferring to the Yongxing Detention Center. She was forced to undergo a physical exam and have her blood taken at the detention center. She was held there until May 10, when her family took her home.

Mr. Chen Xiangming was arrested at work on October 1, 2019. His whereabouts are unknown.

Ms. Liu Huirong from Nanren Township was arrested by officers from the Wugong County 610 Office, Domestic Security Division, and the Nanren Police Station on August 26, 2019. Her home was ransacked, and a printer, computer, Falun Dafa books and other personal belonging were confiscated.

Ms. Liu is being held in the Qindu District Detention Center, Xianyang City.

Ms. Zhang Lifang was arrested and her home ransacked on September 29, 2019. Her whereabouts are unknown.

Ms. Zhen Jie was sentenced to a two-year prison term by the Yinan County Court in June 2019. She appealed, but the Linyi Intermediate Court upheld the original verdict. Ms. Zhen was taken to the Jinan Women's Prison in August.

Ms. Li Cui’e and her younger brother Mr. Li Jiwei were arrested at their rented home in Yishui County prior to October 1, 2019, which marked the 70th anniversary of the Communist takeover in 1949. Police from the Shengli Oilfield took them to Dongying City.

“Malaysia: Practitioners Learn from Each Other During Experience Sharing Conference”