(Minghui.org) Today's news from China includes incidents of persecution that took place in 7 cities or counties in 6 provinces, where at least 10 practitioners were recently persecuted for their belief. 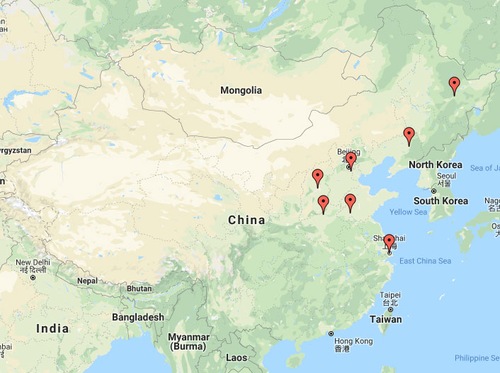 Ms. Wang Wanying from Wen County was arrested by officers from the Wen Domestic Security Division on July 10, 2018. She was held in the Wen Detention Center and secretly sentenced by the Jiaozuo Intermediate Court.

Ms. Bai Yunxia was sentenced to an 18-month prison term by the Yuci District Court.

Her daughter-in-law Ms. Zhang Xiangrong is being held in the Langfang City Detention Center.

Ms. Cai Yufang was arrested by officers from the Minhang District Domestic Security Division and the Hongqiaolu Police Station on September 3, 2019. Her home was ransacked.

She was placed under administrative detention for 15 days and then transferred to the Fengxian District Detention Center under criminal detention.

Ms. Cai was officially placed under arrest by the Minhang District Procuratorate on October 8.

Ms. Cao Fengying was arrested at home on the evening of October 9, 2019, and placed under administrative detention. She returned home on October 13.

Ms. Meng Lichun is being held in the Harbin City No. 2 Detention Center.

Ms. Li Ning, about 30 years old, and Ms. Duan, in her 50s, were arrested by officers from the Rencheng District Domestic Security Division around August 24, 2019.

Mr. Kan Yongyu, 80, was arrested on the afternoon of September 14. He was taken to the Jiezhuang Police Station, where officers photographed him and took a sample of his blood. He was taken home by the village head at around 9:00 p.m. that evening.