(Minghui.org) The 16th Polish Falun Dafa Experience-Sharing Conference was held in Warsaw on November 24, 2019. The eight practitioners who spoke at the event talked about how practicing Dafa changed them for the better. The presentations were simultaneously translated into English, Vietnamese, and Chinese. 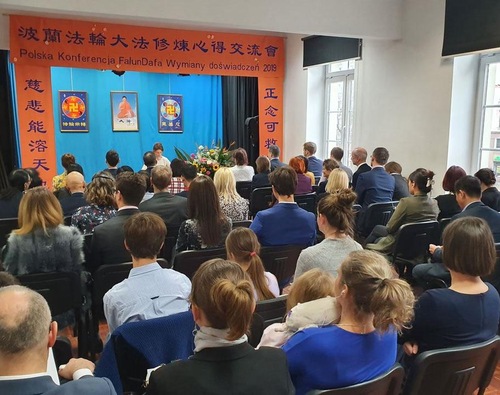 The Purpose of Life

Monika, who started to practice about a year ago, said she always hoped to find her purpose in life. Searching the Internet with the keywords “Cultivation books,” she saw that the first search result was the book Zhuan Falun. She bought the book in 2015. She subsequently lost interest and put Zhuan Falun on her bookshelf after reading less than 20 pages.

She continued her search for spiritual awareness and tried different spiritual practices, but they ended in failure every time, leaving her frustrated and in despair.

She was still searching when she went to a park in September 2018. She remembered that when she was young, an elderly neighbor had once told her that a four-leaf clover meant good luck, so she began looking around. She didn’t find any and was just about to leave for home when she suddenly saw four-leaf clovers right in front her—not one or two, but six of them! She knew she still had hope.

Back home, she heard a voice in her head say, “It is time to pick up the book and read it.” “What book?” she wondered. She then saw Zhuan Falun on the shelf where she had left it three years prior. She picked it up and read page after page.

“I was so excited after reading Zhuan Falun,” she recalled. “I had been dreaming about something like this for so many years—but I did not realize that it was here, right in front of me. Master Li is the best, because he told us something so profound.” That evening, she could feel Master helping to cleanse her body.

After that, Monika became a determined practitioner. She cherishes Dafa very much, given the hardships she previously encountered. She tells others about the practice and especially about the persecution in China. “I came to understand that we all— myself, my entire family, and other people—are here for Dafa,” she explained. 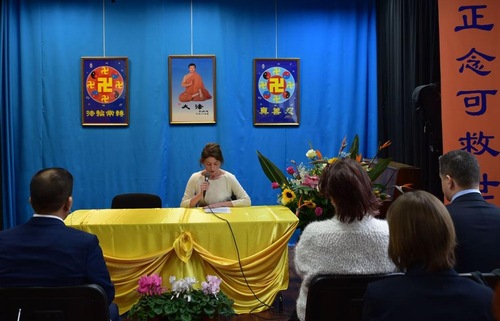 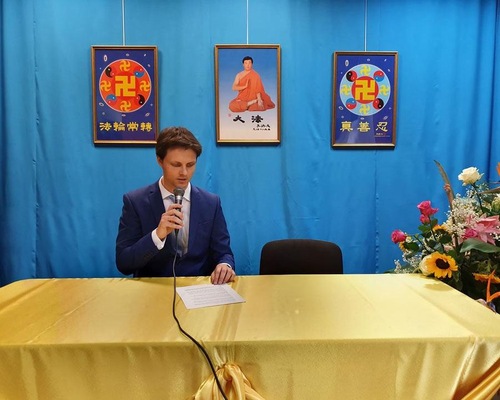 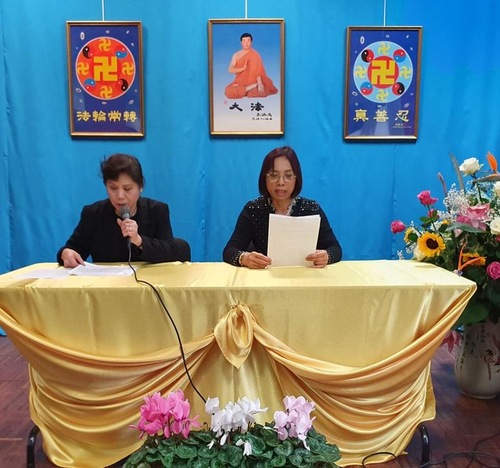 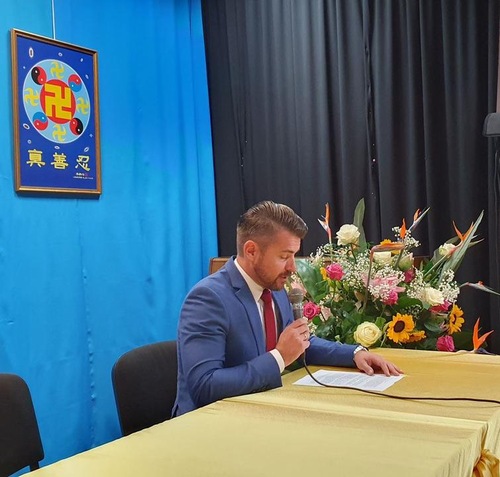 Eight practitioners discussed their cultivation experiences at the conference.

A Journey of Hope and Peace

Growing up in a Russian-speaking region of Ukraine, Irena went to college in Moscow where she lived through the fall of the Soviet Union. Constant changes in society and in her family made her long for a life of peace and quiet. She got married in Kraków, Poland in 2002 and started a business with friends. But the peace did not last long. She had problems with the business and in her marriage. In the end, she divorced, and to make matters worse, her health also deteriorated. Besides migraines, she also suffered from ankylosing spondylitis [a form of arthritis primarily affecting the spine] and an overactive thyroid, among other ailments.

When Irena was in the depths of despair, her tour guide friend gave her a flier about Falun Dafa. Her friend said, “At the main square in Old Town in Kraków, I was leading a group of tourists and saw the Tian Guo Marching Band. There were people in yellow T-shirts nearby and one of them gave me this flier.”

Irena went online to read about Falun Dafa, and downloaded Master’s lecture in Guangzhou. “As soon as I listened to the lecture, I was so amazed. Truthfulness-Compassion-Forbearance was something I had been looking for throughout my life.” she said. She knew this was a message from the divine, something that could guide her to return to her original, true self.

Although her understanding of cultivation practice was shallow, Irena followed the Dafa principles, Truthfulness-Compassion-Forbearance. Whenever she noticed something inconsistent with those principles, she would correct it. Gradually, her curved spine straightened, her migraines disappeared, and she no longer needed medicine for thyroid. More importantly, she became more open-minded and was able to get along with others better. “The principles of Falun Dafa, Truthfulness-Compassion-Forbearance, showed me a bright path of hope,” she said. “I am grateful to Master from the bottom of my heart. I also know that I must share something so wonderful with more people.”

Currently working as a tour guide for a Polish travel agency, Irena often introduces Dafa to tourists and gives them brochures about the practice. At a resort in Ukraine, Irena once played Master’s exercise video for about 450 people who were starting to learn the exercises.

From time to time, Irena also encounters xinxing conflicts. Considering herself a practitioner, however, she knows that these are opportunities for her to improve her character. She added, “I am so fortunate to know Falun Dafa. I will remain diligent and steadfast.”

Looking Within as a Coordinator

Jaś has been a Falun Dafa coordinator in Poland for many years. Most of the time he was able to be considerate of others when making arrangements. There were times when he had problems, but he was able to remain steadfast in his belief in Dafa and Master. For almost every event, he arrived the day before to prepare. Whenever he saw people learning the facts about Falun Dafa and signing petitions to support practitioners, Jaś said he was very happy for them.

Despite his good preparation, however, Jaś found that there were still unexpected issues during these events. “I had no choice but to look within unconditionally,” he said. “Once I was able to look inward and improve myself, these problems would disappear. That experience taught me that, as practitioners, we have to examine ourselves and constantly improve ourselves.”

Faith in Dafa and Master

Minh, who is from Vietnam, used to suffer from arthritis in her knees. It was extremely painful, and although she searched everywhere, there was no cure. Right before a knee replacement surgery, she heard about Falun Dafa and began to practice it. The pain disappeared, and she was able to walk normally. She said, “I was so thankful, and I always tell people that Falun Dafa is great!”

The knee pain bothered her again, however, a year after she started to practice, and for the next four months, she could hardly sleep due to the pain. Knowing that she was a practitioner and that the problem came from karma, Minh did not treat it like a non-practitioner would. Instead, she continued studying the Dafa teachings and doing the three things. She recovered four months later. Although already in her 60s, she is very energetic and looks much younger than her age.

Minh and her two young grandchildren who were in the car, miraculously survived a major car accident in July 2018. Not only that, the woman who was thrown for over five yards was also not injured. Grateful that Master had saved everyone, Minh told the officer how wonderful Dafa is when she discussed the accident at a police station. As she showed them the exercise video of Master Li, some officers wrote down the information, saying there were interested in learning it.

Born in Austria, Sonja clearly remembered how her father mistreated everyone in the family when she was young. After her parents divorced, she no longer had any contact with her father. Because of the trauma, however, she turned to smoking, drinking, and drugs. She said her feelings for her father could be summed up in just one word—hatred.

After becoming a Dafa practitioner in 2007, Sonja quickly stopped smoking, drinking, and doing drugs. She actively participated in activities to help to let people know about the practice. She knew she needed to tell her parents about Dafa, but she was hesitant because of her overwhelming hatred for her father.

Through constant Fa-study, Sonja learned that such a negative feeling was an attachment, which as a practitioner, she had to let go of. Plus, her father was also someone she needed to save. Again and again, she visited him and his family, telling them about Dafa, and inviting them to watch Shen Yun. On her father’s 60th birthday, many people, including her mother, came.

“It is Falun Dafa that healed a broken family,” said Sonja. In particular, it took her ten years to let go of her negative feelings for her father. During that time, she also found her own attachments of competitiveness, showing off, and jealousy. “Without Dafa, there is absolutely no way I could have done these things. Thank you, Master, for helping all of us,” she said.

Working in the News Media

Mikołaj works in a news media. The video programs he made were often criticized, so he kept improving his technical skills and was able to produce several good videos. But during the review process, meetings were canceled, the network closed down, and some videos were forgotten. As a result, only his poor quality videos were judged during the evaluation. This upset him and he thought the situation was unfair.

After this happened several more times, Mikołaj realized that his attitude of thinking things were unfair was an attachment. “As a practitioner, it is critical to improve my xinxing level. I cannot just hold onto my attachments,” he explained. Through continued Fa-study, he found the areas where he needed to improve and shared this with other practitioners as well as supervisors. He has now learned that his good videos are already online, and he has decided to do better.

Tomasz has practiced Falun Dafa for a long time. When he first started, his personal life improved dramatically, and he started his own business. After consistent growth and expansion, his business suddenly ran into problems last year and was on the verge of bankruptcy. It took him about a year to resolve the debts.

Through this process, Tomasz realized that the problems with his business were not accidental. “Because I had money, I was willing to show off, had a big ego, and was attached to comfort,” he said. All these attachments were exposed by the decline in his business. But this setback provided a valuable lesson for him – he could improve. Not only that, he learned to remain undisturbed.

“My Twenty-One-Year Journey of Cultivation and Fa Validation”