Their large banners and demonstration of the Falun Gong exercises drew people’s attention. Many wanted to hear about Falun Gong and showed interest in this self-cultivation practice.

After hearing about the crimes the CCP is committing against Falun Gong practitioners, many passersby signed a petition calling for an end to the persecution in China. A mother asked if her one-year-old son could sign, too. A husband and wife from Hamburg asked if they could find a place to learn Falun Gong in Hamburg. 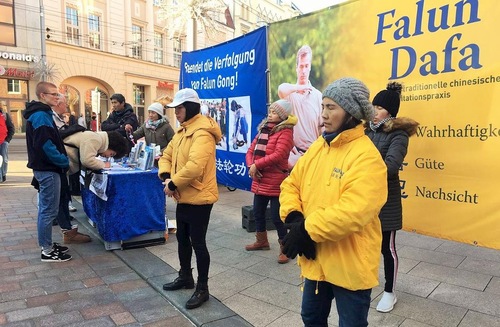 The Falun Gong activity on Marienplatz 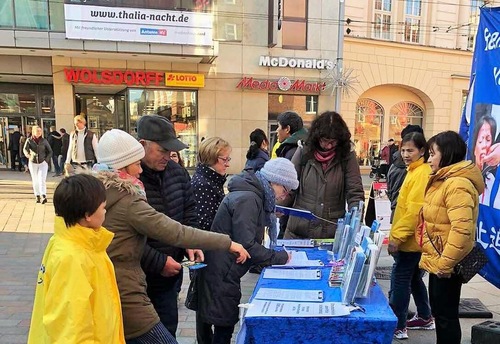 Passersby learn about Falun Gong and sign a petition calling for an end to the persecution.

After a young man and woman signed the petition, the man told practitioners, “Your banner sends a very clear message. I understood it as soon as I saw it.” He thought what Falun Gong practitioners were doing was very important, because he hadn't read about the persecution in any media. They wished practitioners success.

A woman told a practitioner, “It's difficult to believe that people in China are treated like this. It reminds me of East Germany. What the Chinese Communist Party (CCP) is doing has many similarities to what used to happen in East Germany.” 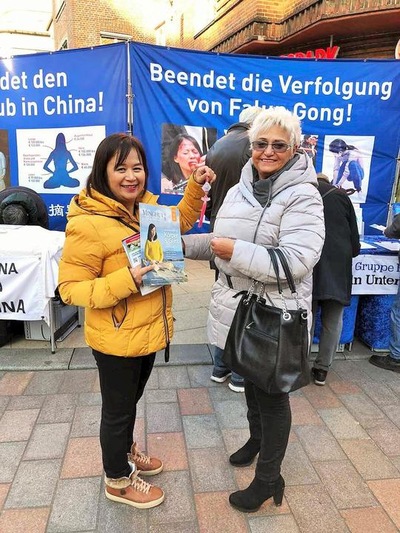 A local resident was fascinated by the Falun Gong exercise demonstration. After learning about Falun Gong's great health benefits, she took a picture of Zhuan Falun, the main text of the practice. She said that she would order it online. She was very interested in learning the exercises.