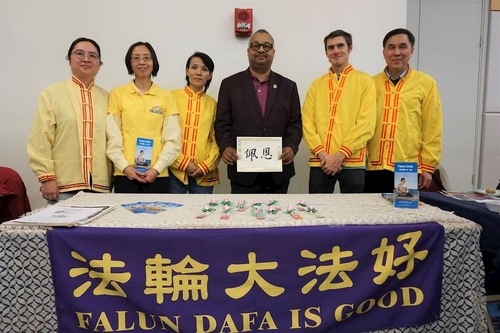 This year's event was attended by local residents from 33 countries. Congressman Payne’s office also invited several consul generals from the New York consulate offices, and diplomats to attend the event.

Falun Dafa practitioners introduced the practice and its unique principles, Truthfulness-Compassion-Forbearance, to people from all walks of life. Four practitioners performed the five sets of exercises on the stage. Practitioners later dressed in traditional Chinese ethnic costumes and played music on Chinese instruments. The elegant Chinese music received enthusiastic applause.

A practitioner who was imprisoned at the Masanjia Forced Labor Camp for six years shared her experience of being tortured for her belief. Congressman Payne was shocked by what the practitioner went through. It was the first time he had personally met a Falun Dafa practitioner who had been brutally tortured by the communist regime.

One representative from a community group had previously visited China on many occasions. When he spoke to the locals in China about Falun Dafa, they were scared, and asked him not to talk about it.

Meeting practitioners at the event helped him understand what Falun Dafa is about, and why it is being persecuted in China. Several local residents from China renounced their memberships in the Chinese Communist Party (CCP) and its youth associations after learning the truth behind the persecution.

Congressman Payne is a long-time, vocal supporter of Falun Gong practitioner efforts to stop the prosecution. During this event, he spoke with practitioners and took a group photo with them.

“Beijing Man Drugged While Detained for His Faith”

“Woman, 70, Emaciated after Seven Months of Detention for Her Faith”