(Minghui.org) A nine-day workshop offering an introduction to Falun Dafa, a meditation system based on practicing Truthfulness-Compassion-Forbearance, is improving the lives of people who live in the tropical city-state island of Singapore.

Practitioners host nine-day Falun Dafa workshops in Singapore periodically, the most recent one from October 19 to 27, 2019. Those who attend watch videos of lectures given by Mr. Li Hongzhi, the founder of Falun Dafa, and learn the five Falun Dafa exercises. Some experience miraculous physical and mental transformations after participating in the classes. 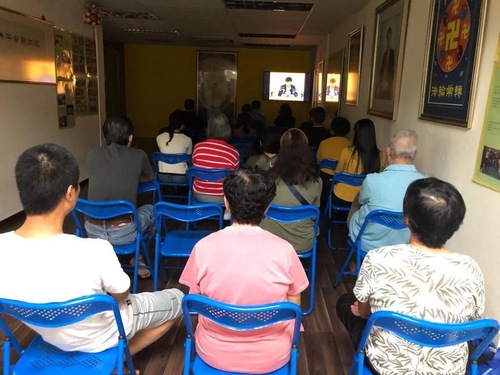 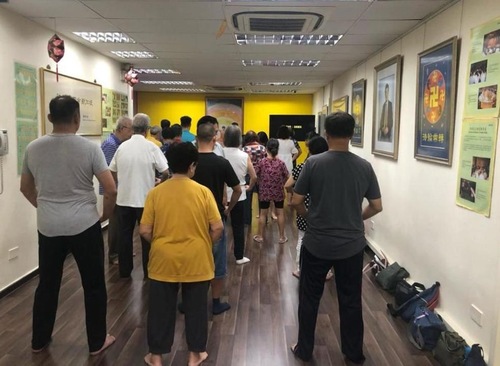 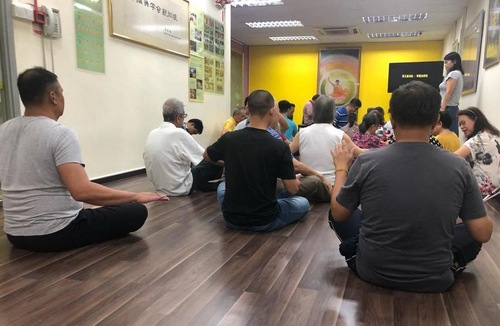 Nine-day Falun Dafa workshop participants learn how to do the exercises.

Mr. Cao is originally from mainland China and had held a negative impression of Falun Dafa. He remembers even his high school textbooks had passages in them designed to incite hatred of Falun Dafa. He was so deeply indoctrinated with the Communist Party's propaganda that, even after living and working in Singapore for some time, he still had not managed to shake that idea.

On his way home one day, he was given a Falun Dafa flier, which he quickly threw away. At home, he calmed down and decided to look Falun Dafa up on the Internet. He became utterly engrossed in articles about Falun Dafa and the persecution. He continued his research the following day and realized that there is nothing wrong with Falun Dafa and that he had been deceived.

Two months ago, he attended his first nine-day Falun Dafa workshop. He thought it was amazing that, after the class, he easily quit smoking and drinking, because his desire for those things had disappeared. He said he had also become aware of the importance of improving himself and acting in accordance with higher principles to eliminate his karma.

Another workshop participant, Madhurai from India, confided that she’d always had a bad temper, but after attending the Falun Dafa classes, she was better able to control herself. She was beginning to understand what Mr. Li discussed in his teachings and agreed with the principles he taught. Having gained a new perspective, she has found herself more tolerant and accepting of others.

Zhiguang was attending the nine-day Falun Dafa workshop for the second time. He had found practicing Falun Dafa a little difficult the first time but said it was easier this time. His friend also thought the practice was beneficial and liked how he felt physically. He said that the practitioners were so warm and friendly that they seemed like family.