(Minghui.org) Neos Kosmos, the largest media for the Greek community in Melbourne, published a report about Falun Dafa practitioner Bill Thodori titled “Why Greek Australians are flocking to this special form of meditation” on September 24, 2019. 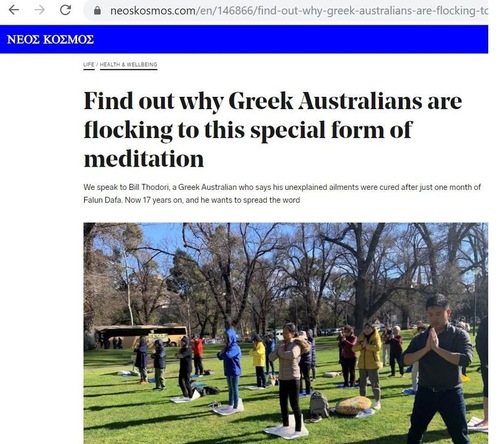 Screenshot of the Neos Kosmos report published on September 24, 2019.

The report starts with Bill's experience, “Soon after moving to Australia from Greece in his 20s, Bill Thodori found his health was suddenly collapsing.

“Weeks of feeling light-headed and dizzy turned into months, and he eventually went to see his doctor who referred him to a number of specialists, and underwent a series of tests. But all of the results were coming back normal.

“Soon Bill was so unwell, that he had to give up his job.

“One day during the Easter period, he remembered a fellow Greek he had met in Sydney. He hadn’t seen Antoni in months, and so Bill picked up the phone and gave him a call, filling him in on the last few months of hardship.

“That’s when he was introduced to Falun Dafa – a form of meditation, with its origins in China.

“Bill had never tried anything like it, but at that point, he was willing to give anything a go.

“‘Believe me, less than one month in, I can honestly say all my symptoms disappeared,’ he told Neos Kosmos.”

Bill has been practicing Falun Dafa for 17 years and is now healthy and happy. His wife and two daughters have also been cultivating themselves according to Falun Dafa's guiding principles. 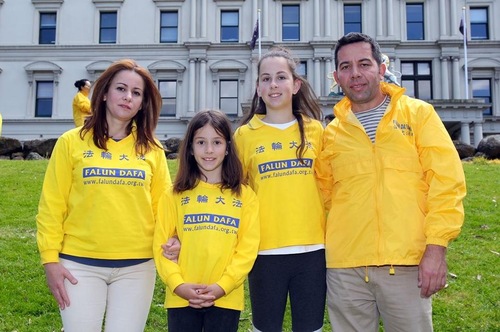 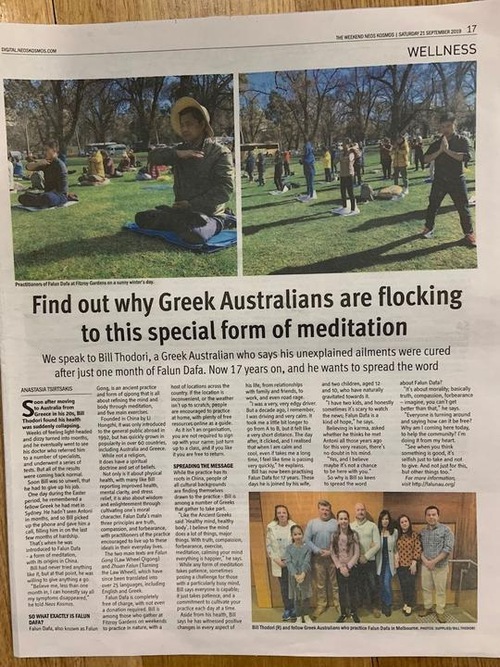 The article explained, “Falun Dafa, also known as Falun Gong, is an ancient practice and form of qigong that is all about refining the mind and body through meditation, and five main exercises.

“Founded in China by Li Hongzhi, it was only introduced to the general public abroad in 1992, but has quickly grown in popularity in over 60 countries, including Australia and Greece.

“While not a religion, it does have a spiritual doctrine and set of beliefs.

“Not only is it about physical health, with many like Bill reporting improved health, mental clarity, and stress relief, it is also about wisdom and enlightenment through cultivating one’s moral character. Falun Dafa’s main three principles are truth, compassion, and forbearance, with practitioners of the practice encouraged to live up to these ideals in their everyday lives.

“The two main texts are Falun Gong (Law Wheel Qigong) and Zhuan Falun (Turning the Law Wheel), which have since been translated into over 25 languages, including English and Greek.

“Falun Dafa is completely free of charge, with not even a donation required. Bill is among those who gather at Fitzroy Gardens on weekends to practice in nature, with a host of locations across the country. If the location is inconvenient, or the weather isn’t up to scratch, people are encouraged to practice at home, with plenty of free resources online as a guide.

“As it isn’t an organization, you are not required to sign up with your name; just turn up to a class, and if you like it you are free to return.

“While the practice has its roots in China, people of all cultural backgrounds are finding themselves drawn to the practice – Bill is among a number of Greeks that gather to take part.

Bill pointed out, “Like the Ancient Greeks said, 'Healthy mind, healthy body'. I believe the mind does a lot of things, major things. With truth, compassion, forbearance, exercise, meditation, calming your mind everything is happier.”

“While any form of meditation takes patience, sometimes posing a challenge for those with a particularly busy mind, Bill says everyone is capable; it just takes patience, and a commitment to cultivate your practice each day at a time.

“Aside from his health, Bill says he has witnessed positive changes in every aspect of his life, from relationships with family and friends, to work, and even road rage.

“I was a very, very edgy driver. But a decade ago, I remember, I was driving and I was very calm. It took me a little bit longer to go from A to B, but it felt like a very short distance. The day after, it clicked, and I realized that when I am calm and cool, even if takes me a long time, I feel like time is passing very quickly,” he explained.

Bill has now practiced Falun Dafa for 17 years. These days he is joined by his wife and two children, aged 12 and 10, who have naturally gravitated towards it. Bill said, “I have two kids, and honestly sometimes it’s scary to watch the news; Falun Dafa is a kind of hope.”

Bill explained why he was so keen to spread the word about Falun Dafa: “It’s about morality; basically truth, compassion, forbearance – imagine, you can’t get better than that.”

“'Everyone is saying how can it be free? Why am I coming here today, to help the community? I’m doing it from my heart. When you think something is good, it’s selfish just to take and not to give.”

The report refers readers to the website http://falunau.org for more information.

“Woman, 63, Sentenced to 7 Years in Prison for Her Faith”