(Minghui.org) Falun Dafa practitioners gathered at Mission Bay Beach in Auckland on October 26, 2019 to practice the exercises and to tell people about the persecution in China. It was a sunny Saturday and many people came to the shore to jog, have a picnic or simply enjoy the beautiful weather.

As soon as practitioners began doing the exercises, people were attracted by the soothing music and the elegant movements and stopped to watch. Some took photos or videos. Some wanted to know what Falun Dafa is, where to learn it and why the Chinese Communist Party (CCP) is persecuting such a peaceful practice. 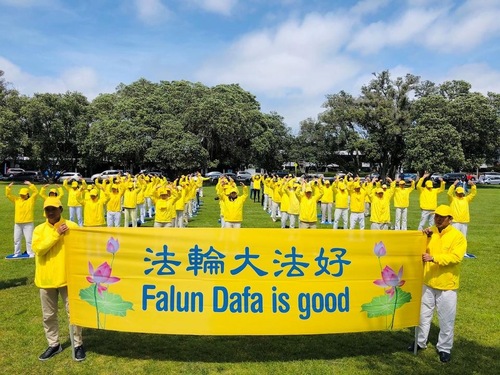 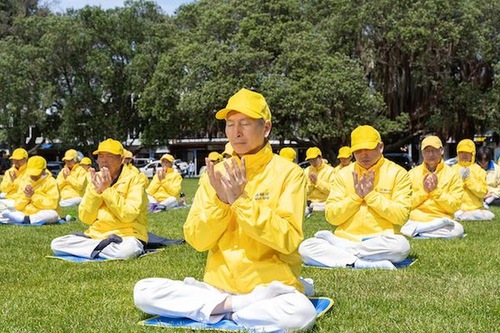 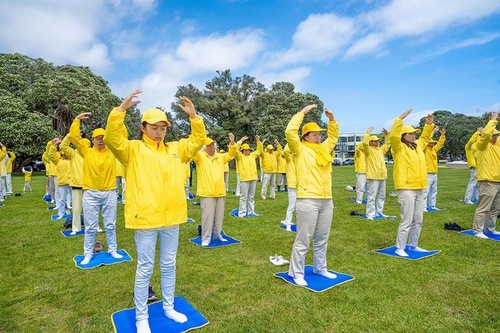 Practitioners do the exercises together at Mission Bay Beach in Auckland. 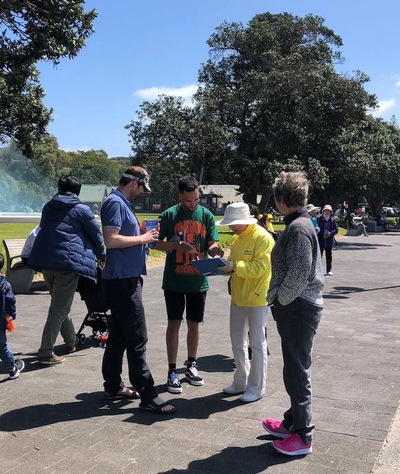 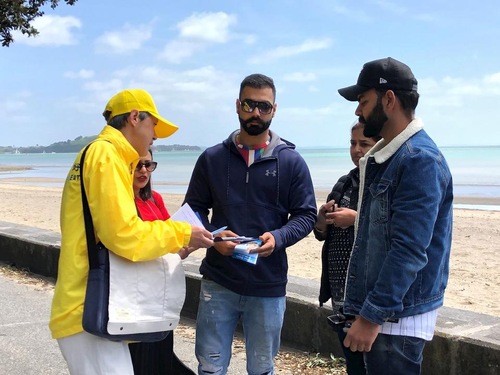 Talking to people about the persecution in China on October 26, 2019

Bernia from Canberra was in Auckland to visit his family. He said he knew about the persecution of Falun Dafa, as he often saw practitioners sitting across from the Chinese Embassy in Canberra peacefully protesting the persecution. Many people showed their support by waving to the practitioners, giving them a thumbs up, or gently honking their car horns. Bernia said that many people are aware of the persecution and everyone feels that this human rights violation is disgusting. He condemned the CCP taking organs from living practitioners because of their faith. He thought that western countries should do something through diplomatic channels to stop the persecution.

Alicia recently moved to New Zealand from England. After seeing practitioners doing the exercises, she said she could feel the peaceful and compassionate energy and that she was interested in meditation and learning the Falun Dafa exercises. She said the CCP's persecution was terrifying, and remarked, “Even though it's hard to believe that such a crime is taking place, I believe that the CCP is doing this.” Alicia feels that practitioners exercising outdoors as a group shows the practice's peacefulness to people, and added that expressing one's belief and appealing for justice are human rights bestowed by heaven. Nobody, no government has the authority to persecute people, she affirmed. 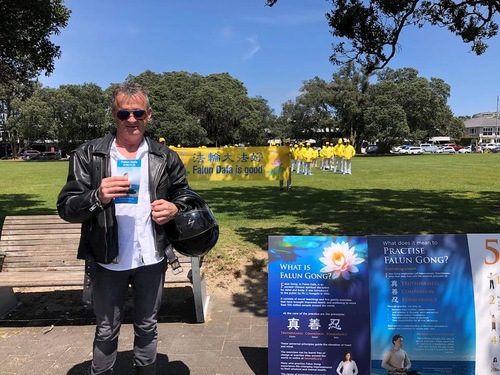 Anthony, a truck driver, was appalled by the persecution in China.

Anthony French is a truck driver. He was shocked when he learned that the CCP is persecuting practitioners who simply practice meditation. He wanted to do what he could to help and let more people know about the crimes taking place in China. He said he would like to see New Zealand's prime minister stand up and oppose the persecution. Anthony added that in today's world that is full of greed, violence and drugs, Truthfulness-Compassion-Forbearance are the values that all people should follow.