(Minghui.org) Today's news from China includes incidents of persecution that took place in 13 cities or counties in 7 provinces，where at least 26 practitioners were recently persecuted for their belief. 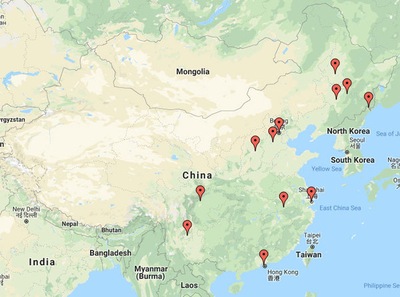 Mr. Xu Jianxin from Qibao Town in the Minhang District had been under 24-hour surveillance for over 15 days starting around October 1, which marked the 70th Anniversary of the Communist takeover in 1949.

Ms. Li Yuhua from Jiugong Town in the Daxing District was forced to report to the Fengtai District Procuratorate on October 15, 2019.

Ms. Li and and another practitioner Ms. Liu Zhongmin are now facing trial.

Ms. Chu Yuzhen and her husband Mr. Yu Hongfu were arrested by officers from the Nancheng Police Station on the morning of June 5, 2019. They were officially placed under arrest by the Shulan City Procuratorate, and their cases have been turned over to the Chuanying District Court.

Ms. Chu was taken to the Jilin City Detention Center, where she was severely tortured. She could not walk, and had severe bruising on her body. She was released on medical parole on October 12, after her daughter was forced to pay 5,000 yuan.

Mr. Yu is still being held in the Nanshan Detention Center.

Ms. Gao Jinying was arrested in November 2018. She was sentenced to an 18-month prison term, and is incarcerated in the Jilin Province Women's Prison.

Ms. Hou Shuang, 81, from Beijing, was arrested by officers from the Beijing Street Police Station in the Kuancheng District, Changchun City, Jilin Province, on April 26, 2019, for distributing materials about Falun Gong. She was released on bail after she was found to have high blood pressure. Ms. Hou was arrested again on August 28, by officers from the Xiguangchang Police Station in the Kuancheng District, and was taken to the Changchun No. 4 Detention Center. She was later held in the Disease Monitoring Center, Police Treatment Section, Changchun Central Hospital.

Ms. Dong Yanhua from the Changchun Automobile Industrial Development Zone was arrested at home by officers from the Xixin Police Station on October 17. Her home was ransacked.

Mr. Xu Shikai (a retired teacher), his son Mr. Xu Mingqing, and daughter-in-law Ms. Zhou Wanqin were arrested on the evening of April 23, 2019. The police confiscated their Falun Dafa books and other personal belongings. Mr. Xu Shikai is due to be tried on the morning of October 23.

The eight practitioners were arrested by officers from the Xiushui Town Police Station, Anzhou, on the evening of May 28, 2019. They have been detained for nearly five months. The Anzhou Procuratorate passed their cases to the Anzhou Court in early October.

Ms. Dong Jinping and Ms. Yu Zhi from Wangjiang County were arrested by the Wangjiang police on July 19, 2019. They were taken to the Anqing City Detention Center, and were officially placed under arrest by the Wangjiang Procuratorate on August 27.

Ms. Bai Yunxia and Ms. Sun Yuxian were scheduled to be tried on October 11, 2019, by the Yuci District Court.

Ms. Zhang Jinmei from Nankoushang Village, Gucheng Town, Dingxing County, was arrested by plainclothes officers from the Gucheng Police Station on the afternoon of October 17, 2019.

Ms. Yin Sen, a resident of Australia, was arrested at the Shenzhen border checkpoint on February 4, 2019, when she returned to visit family in Dalian City, Liaoning Province. She was taken to Dalian by Dalian Domestic Security officers on February 13.

Ms. Yin was sentenced to a one-year prison term by the Shahekou District Court, Dalian, in July, and taken to the Liaoning Province Women's Prison in mid-September.

Ms. Chen Mi from the Chuangyecheng area of Daqing City was arrested in early October 2019. She was taken to the Daqing Detention Center.

“Jilin Woman Recounts Ordeal During 7-Year Imprisonment for Her Faith”