At the rally, they called on all sectors of society to help stop the CCP’s persecution of Falun Gong.

The violent attack on a female Falun Gong practitioner in Hong Kong took place on the afternoon of September 24, after Ms. Liao Qiulan and her friend went to a police station to apply for a permit to hold activities on October 1.

Shortly after they left the station, two men dressed in black and wearing black face masks attacked Ms. Liao with what appeared to be police batons. Ms. Liao was badly beaten after repeated blows to the head that left bloody gashes. 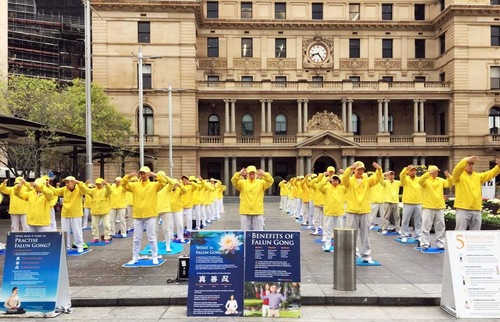 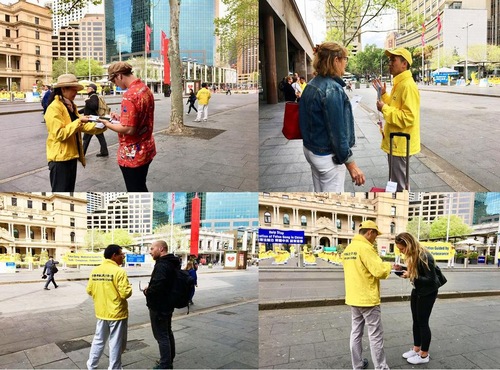 Passersby talk with Falun Gong practitioners to learn more and sign the petition protesting the persecution. 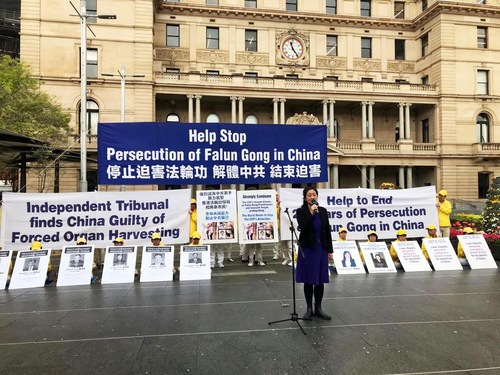 Dr. Lucy Zhao, director of Australia's Falun Dafa Association, said at the rally, “The CCP has controlled China for 70 years with lies and violence. We commemorate those people who were tortured to death by the CCP.

“Several million innocent Falun Gong practitioners are being detained and persecuted in China. We urge the Australian government to take action to help stop the CCP’s violence in China.

“We have recently collected a list of Chinese human rights violators. We have submitted the list to the Australian government and other Western governments, including the United States, the United Kingdom, and Canada.

“We call on the government of Australia and other Western countries to deny visas to these human rights violators and to deny their entry into these Western nations.

“If not, (you) will be banned from entering any free Western countries. This denial will include your children and grandchildren. You will be brought to justice.” 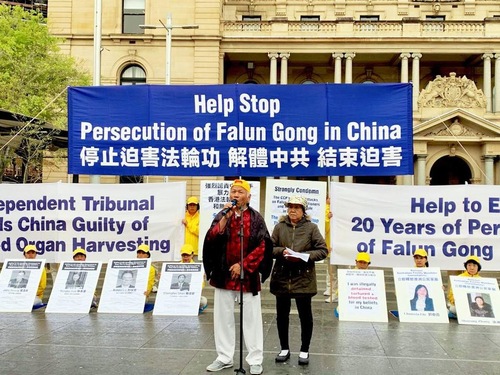 William He, a Chinese community leader, speaking at the rally

William He, a leader of the Chinese community in Parramatta, said at the rally, “The CCP’s thugs create chaos in Hong Kong, including beating Falun Gong practitioners and the local citizens. They are hooligans and have no humanity. I hope that the people of Hong Kong will be vigilant and defend themselves.” 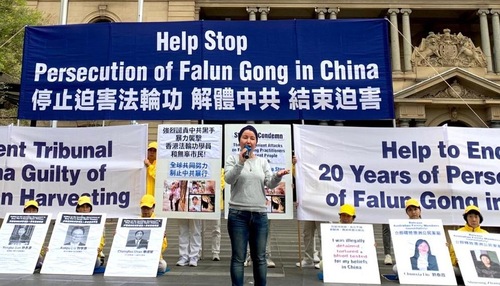 Fatimah-Abdulghafur, a representative of a Uighur women's group, speaks at the rally.

Fatimah-Abdulghafur, a representative of a Uighur women's group, said, “I am standing here today to speak up for the most basic human rights, because my family is still being held in a CCP concentration camp.

Ms. Michelle Nguyen, a spokesperson for the International Coalition to End Transplant Abuse in China (ETAC), gave a detailed introduction on why the China Tribunal was established and its important role.

She said, “The China Tribunal chaired by Sir Geoffrey Nice QC investigated thousands of pages of evidence, heard from more than 50 witnesses, and made a final judgment this year.

“The tribunal found both direct and indirect evidence of forced live organ harvesting in China. It has been carried out for many years in China on an alarming scale. Falun Gong practitioners have been killed as the main source of organs.”

Nguyen called on all sectors of society to stop these terrible human rights catastrophes as soon as possible. 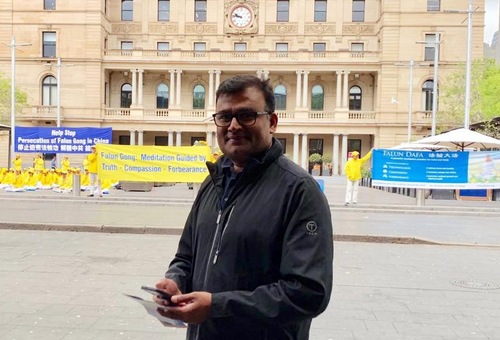 Manohar, a tourist in Sydney

Manohar is originally from India but now works in Melbourne and was on vacation in Sydney. This was the first time he had heard about Falun Gong and was impressed to see the many practitioners meditating so peacefully together.

He said he could not understand why they would be so cruelly persecuted for such a peaceful and ordinary meditation and was shocked to hear that a Falun Gong practitioner was beaten by CCP thugs in Hong Kong. When practitioners told him that the US government had decided to impose sanctions on perpetrators of the CCP’s persecution of Falun Gong, he said that he thought it was the correct course of action. 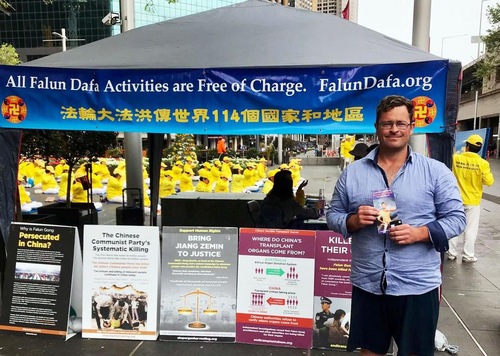 James from New Zealand hopes Falun Gong practitioners continue their efforts to protest the persecution. He was dismayed to learn of the CCP’s state-sanctioned live organ harvesting. 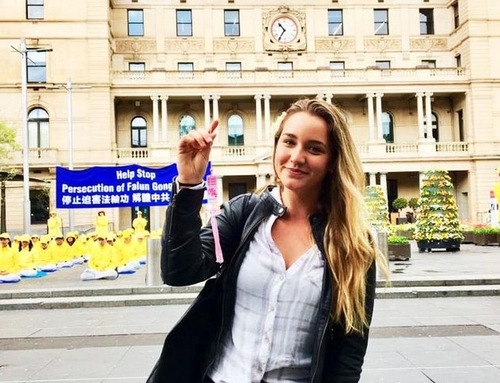 Markeda from the Czech Republic said Falun Gong promotes traditional Chinese culture. She was impressed by the sitting meditation and appalled at the CCP’s live organ harvesting. 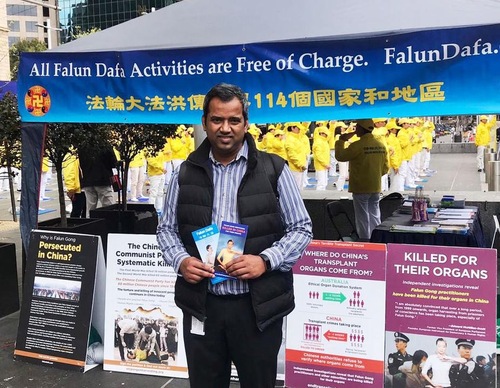 Mihar said that the international community should condemn the CCP’s atrocities. 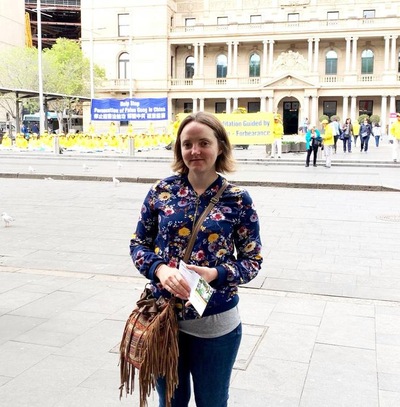 Astrid from France hopes that the leaders of different countries step in to help stop the persecution in China. 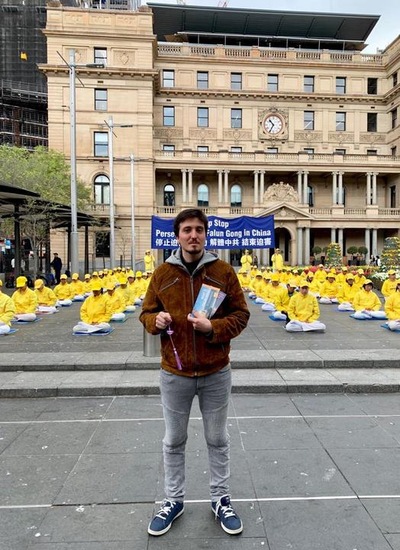 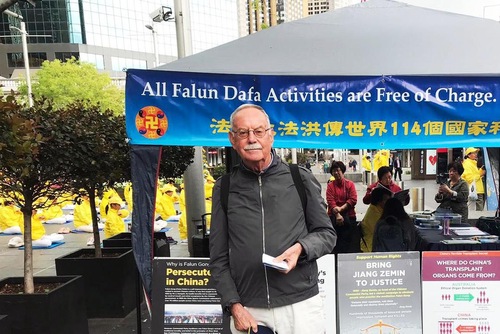 Jean Bo Racine is against the CCP’s live organ harvesting. He condemned the persecution and praised Falun Gong. 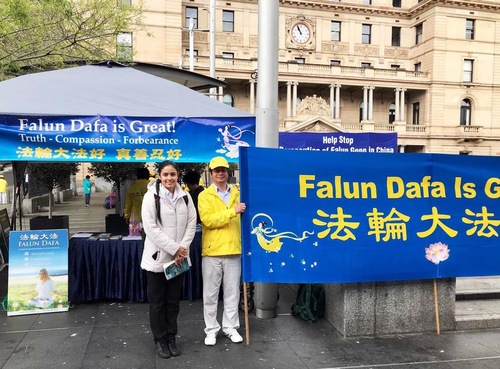 Karla from Colombia said she would tell more people about the persecution. “The CCP’s persecution is completely wrong. It makes me sad,” she said. 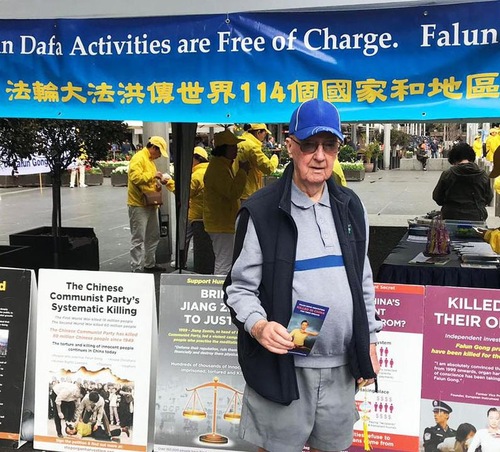 Daniel O’Leary said he supports Falun Gong practitioners because they are good people. He condemned the CCP’s live organ harvesting and wished the Australian government would do something to help stop the atrocities.