(Minghui.org) Falun Gong practitioners in New York held a peaceful five-day-long appeal at Dag Hammarskjöld Plaza during the 74th session of the UN General Assembly (UNGA 74) from September 24 to September 28, 2019.

They called on government leaders from around the world to help stop the persecution of Falun Gong by the Chinese Communist Party (CCP) and to take action against the CCP's crimes of harvesting organs from living Falun Gong practitioners. 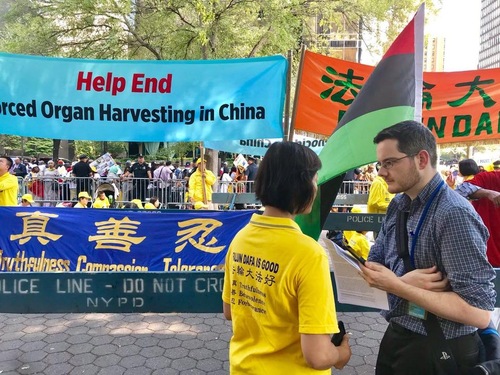 A Fox News report by Adam Shaw on September 28, titled “Chinese Influence on Display at UN as US Decries Human Rights Abuses,” reported about the Falun Gong practitioners' peaceful call for an end to the CCP's crimes of organ harvesting.

“Reports of torture, murder and the harvesting of organs of Falun Gong advocates have continued to surface. The government has said it has used executed prisoners’ organs in the past but has since stopped.”

“One woman, Jane, quietly told Fox News Wednesday of how her husband was taken and killed by the regime when their daughter was just 9 months old. Her daughter is now 19, she said as tears fell.”

September 25 was the third day of the UN summit and many protester groups had gathered at Dag Hammarskjöld Plaza. Adam Shaw watched Falun Gong practitioners doing the meditation exercises in front of a large banner stating, “Help End Genocide in China.” 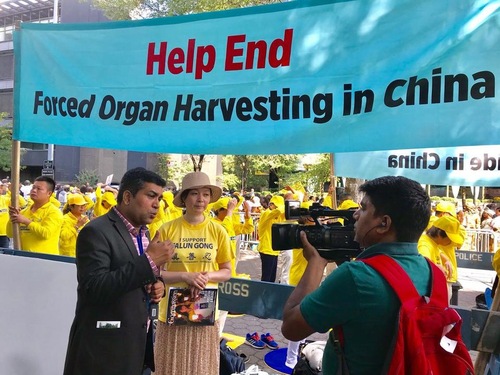 A reporter from TV9 Bharatvarsh, a 24-hour national Indian news channel, interviewed Falun Gong practitioner Liu Jing about the CCP's crimes of organ harvesting from prisoners of conscience. Jing told him about the skyrocketing number of organ transplant surgeries in China and the increasing body of evidence of the CCP's genocide persecution of Falun Gong through harvesting organs from imprisoned practitioners. She explained that investigators even have recordings of phone calls in which hospital employees and high-ranking Chinese officials admit to using healthy Falun Gong practitioners' organs for transplant.

The news reporter told his audience, “We are shocked to know what the Chinese government has done on hearing these people's experiences, especially forced organ harvesting. It is hard to believe! They are humans! How can such things be allowed to happen in a civilized society, just because this group of people have their ideas and belief! We must support them! Thank you!”

Quartz: China Is Accused of Harvesting Tens of Thousands of Organs

Quartz, an online American business news media, published a report by Olivia Goldhill titled “The Blackest Market, China is accused of harvesting tens of thousands of organs to serve a thriving global market” on September 27.

The report pointed out, “The organ harvesting contributes to a $1 billion organ market in China, according to the China Tribunal, which attracts both Chinese nationals and people traveling from overseas. A liver can reportedly be sold for $160,000...

“Barely two months after Han Junqing, from Beijing, was imprisoned for practicing the spiritual discipline of Falun Gong, he died in captivity. When his family was briefly allowed to see his body, more than a month after he died, his daughter says they discovered it had been sliced open.”

The reporter had learned about the Han family's plight at an event at the Harvard Club in New York on Wednesday, September 25, that was held to coincide with the United Nations General Assembly.

At the event, Han Junqing's daughter Han Yu described how her family had gone to see her father's body almost a month after his untimely death in 2004. To this day, the family believes that Han Junqing was a victim of China's systematic forced organ harvesting from prisoners of conscience.

In her article, Goldhill cited the China Tribunal, which issued its final judgment in June this year that stated that without a doubt prisoners of conscience in China are being killed on a large scale for their organs.

Goldhill quoted estimates from human rights lawyers and experts who speculate that at least 65,000 Falun Gong practitioners have been killed for their organs since 2001 and that the Chinese regime has also killed members of other religious and ethnic minorities, including Uyghurs, Tibetans, and some Christian sects, for their organs.

She also wrote that a senior lawyer from the China Tribunal had called on the United Nations Human Rights Council (UNHCR) earlier in the week to investigate China's organ harvesting crimes and take action: “Victim for victim and death for death, cutting out the hearts and other organs from living, blameless, harmless, peaceable people constitutes one of the worst mass atrocities of this century,” Hamid Sabi, counsel to the China Tribunal, had told UNHCR.

The short waiting times for organs in China, Goldhill wrote, serve as evidence of a large source of illicit organs in China, since in normal countries, voluntary organ donation systems mean that patients will wait for months or even years for a matching organ for transplant. In China, patients wait mere weeks or even just a few days. This has enticed people from all over the world to travel to China to take advantage of the surplus of organs.

Goldhill also quoted David Kilgour, the former Canadian secretary of state for Asia-Pacific and the co-author of a 2016 report on organ harvesting in China, who spoke at the event at the Harvard Club on September 25.

“What can legislators and governments do about this?” Kilgour had asked. He then told the audience that Belgium, Italy, Israel, Norway, Spain, and Taiwan have all already banned organ transplant tourism to China and suggested that other countries follow suit. “If Americans, Canadians, and others showed more commitment to our own values, the dreadful commerce might end quickly,” he said.

In her article, Goldhill described the plight of another family who had a representative at the event. Jiang Li, from Chongqing, spoke about how her father had been killed for practicing Falun Gong after he was thrown into a labor camp in 2008.

“My father was put into a freezer while he was still alive, and his organs were harvested, without the consent of our family,” Jiang told the event attendees.

“The family was permitted to see his body seven hours after his purported death,” Goldhill wrote, “But when they arrived, said Jiang Li, they were shocked to discover that his body, which was in a refrigerator, was still warm. They tried to do CPR, she added, but were dragged out of the building and weren’t allowed to see Jiang Xiqing again. Later, they were able to get an autopsy report, which showed his ribs were broken and his organs harvested.”