(Minghui.org) The Tian Guo Marching Band, whose members are all Falun Dafa practitioners, was invited to perform at the Grand Parade for the Royal Melbourne Show, an annual agricultural fair in Australia, on Sunday September 29, 2019.

The band's traditional blue and white Chinese costumes, magnificent music and peaceful, yet energetic, demeanor received an enthusiastic response and compliments from spectators in Melbourne. 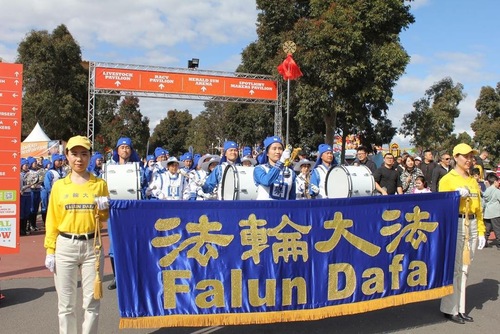 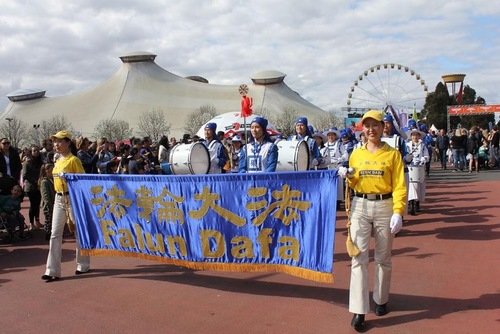 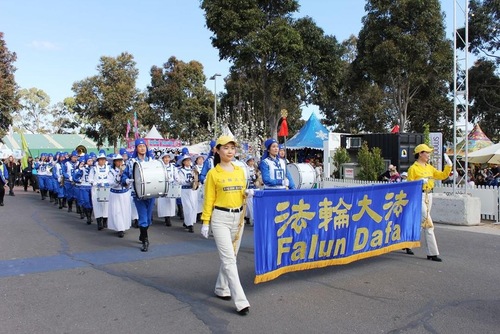 The Australian Tian Guo Marching Band performs the finale in the Grand Parade at the Royal Melbourne Show. 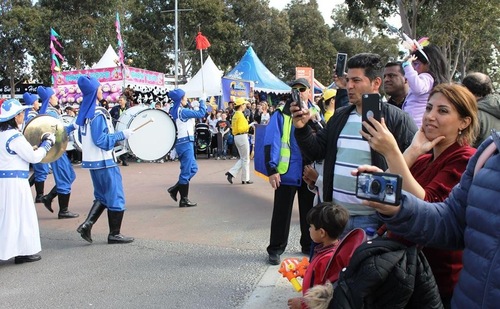 Mr. Pu, originally from Korea, is a member of the Australian Tian Guo Marching Band. He used to suffer from back pain because his work involved long hours of driving. After he began practicing Falun Dafa, the discomfort went away. Mr. Pu said he joined the band because he wanted to show people the beauty of Falun Dafa. He feels that the music is very uplifting.

Mr. Pu remarked that his manager at work had just told him his family enjoyed the band's performance at the show. His manager's wife had said she loved the music and Mr. Pu also shared with them some of the benefits he has gained through taking up the spiritual practice of Falun Dafa. 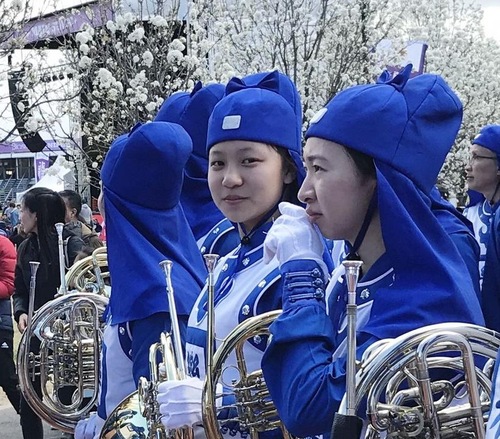 Yu Qing, a secondary school student and member of the Tian Guo Marching Band, said, “This is the first time we were invited to perform at the Royal Melbourne Show. Many people took photos and videotaped our performance. This is a very meaningful event. People can feel the positive energy of Falun Dafa through the music we play.” 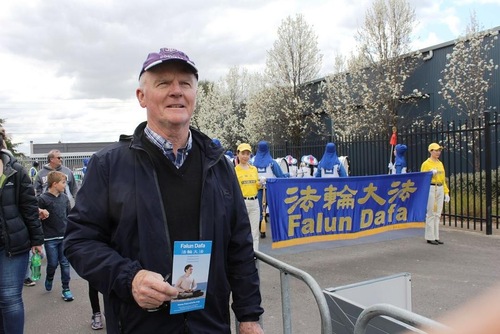 Bryan Murray, a senior pilot, stopped to listen to the music played by the band. When he learned that the band costumes were styles from the Tang and Song dynasties, he said excitedly, “I love the performance! The band looks spectacular with the eye-catching instruments and traditional costumes. I enjoyed the traditional music played by the band.”

Bryan also said he thinks that the principles of Falun Dafa – Truthfulness, Compassion, and Forbearance – were showcased through the band's performance and are very important values in today's society.

The annual Royal Melbourne Show, which started at the end of September this year, lasts for 10 days. The first show was in 1848 and it is now Melbourne's largest and most well-known event, bringing together different agricultural, food, and entertainment activities. Each year an estimated 450,000 people attend the show.

“Rising from the Sludge But Remaining Unsullied”