(Minghui.org) Today's news from China includes incidents of persecution that took place in 11 cities or counties in 8provinces, where at least 15 practitioners were recently persecuted for their belief. 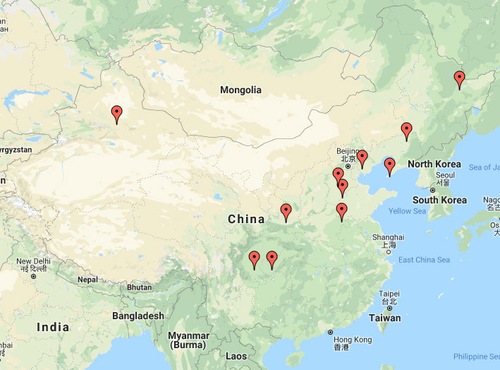 Mr. Zhou Fei was handcuffed and arrested at work by five or six plainclothes officers on the morning of September 19, 2019. They ransacked his workplace and home.

Mr. Ma Shaojie was arrested by officers from the Qingnian Police Station on September 13, 2019, for talking to people about Falun Gong. He was released after 7:00 p.m. that evening.

Mr. Ma was arrested again on the morning of September 17 by officers from the Linqing Domestic Security Division and 610 Office. His whereabouts are unknown.

Ms. Qiaoyun and Ms. Liu Yuejing from Nanzhiqiu Town were reported to the authorities for talking to people about Falun Gong on the morning of September 18, 2019. They were arrested by plainclothes officers, and taken to the Ningjin County Domestic Security Division.

Ms. Wang Yali from the Xianyang No. 1 Textile Factory left home four or five days ago, and has not returned. Her family thinks she may have been arrested.

Officers from the Xifeng County Domestic Security Division and the Gaojiadian Police Station went to Mr. Yang Guoquan’s home on September 16, 2019. They arrested his wife Ms. Xu Shuzhen and another practitioner with the surname Zhang, who helped out at their home.

Cheng Feng, chief of the Pingyuan Police Department in the Liangyuan District, took more than ten officers from the Domestic Security Division and a local police station to Mr. Xi Dongsong’s home on the evening of August 29, 2019.

They cut the electrical power line to Mr. Xi’s home. When he went outside to check, the officers rushed over and dragged him into a police car. Mr. Xi was taken to the Shangqiu City Detention Center.

Ms. Wang Xiujun was arrested by officers from the Zhengzhuangzi Township Police Station in the Kaiping District on September 17, 2019. She was taken to the Fengnan City Detention Center. The officers said that she was to be detained for five days. Her family was told to pay 500 yuan.

Ms. Sun Guifang found out at 7:00 p.m. on September 17, 2019, that her home in Section A of the Ancient City in the Jinzhou District had been ransacked. Falun Dafa books and photos of Falun Gong's founder were confiscated.

Mr. Qu Jun from Jinzhou was arrested on the afternoon of September 19, when his ID card was checked on a bus. He was detained for ten days.

Four practitioners from Rong County were arrested on the morning of September 9, 2019, when they were studying the Falun Gong teachings together at a practitioner’s home. Two of the practitioners were released later that day. Mr. Lai Dehua and Ms. Wang Zhiqiong were taken to the Songlinpo Detention Center.

Mr. Li Weiran was arrested by officers from the Qiaonan Police Station on August 3, 2019, and his home was ransacked. He is being held in the Jiamusi Detention Center.

Ms. Li Yuzhi, in her 70s, from the Saybag District was arrested on September 17, 2019, and taken to the Dabancheng Brainwashing Center. The police ransacked her home, and confiscated Falun Dafa books.

“A Kind Reminder to Cultivate Speech”