79-year-old Man Allowed to Delay Start of Prison Sentence, Then Taken Back into Custody and Force-fed

(Minghui.org) A 79-year-old man was given one year in June 2019 for practicing Falun Gong and allowed to delay the start of his prison sentence due to his poor health. The police took him back into custody three months later and force fed him when he went on a hunger strike in protest. He was released 11 days later while on the verge of death. He is now serving time outside of prison. 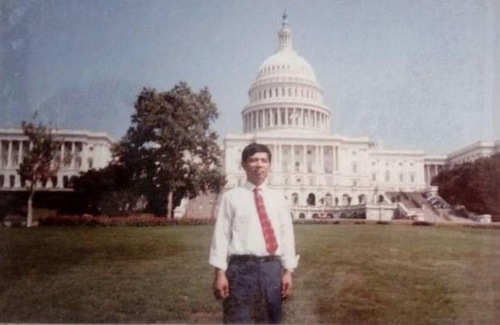 Mr. Cao Hongru, a resident of Shanghai, was first arrested on December 4, 2017 for giving his neighbors calendars with information about Falun Gong.

Officers force-fed him after he held a hunger strike to protest the arbitrary detention. His physical condition declined quickly afterwards, and he was released on bail on December 25, 2017.

Mr. Cao was ordered to appear in Fengxian District Court on June 6, 2019 and was sentenced to one year in prison and fined 2,000 yuan. The judge allowed him to postpone the start of his prison sentence as he still suffered from high blood pressure, kidney dysfunction, as well as symptoms of a stroke and brain atrophy.

Two officers from Xinhua Police Station took Mr. Cao to a hospital for a physical checkup on September 16, 2019. They then drove him to Changning District Detention Center at around noon.

Mr. Cao began a hunger strike as soon as he was sent to the detention center. In the first three days, the head of the detention center sent many people to talk to him and urged him to eat. When he still refused to eat, they threatened him, “We'll have ways to make you eat.”

On September 19, the fourth day of his hunger strike, a group of officers came and force fed him. Four people held his limbs and a fifth person held his head. A sixth person who looked like a doctor stood to the side to monitor the process. A seventh officer inserted a thick, hard tube into his nose. The pain was so excruciating that Mr. Cao almost suffocated. The tube later stuck in his throat and couldn't go any deeper. That person pulled it out and inserted another one.

Fearing that he might die from the force feeding, the officers gave him saline drips. The intravenous infusion took more than six hours to finish. The officers cuffed his hands to the rails of the bed very tightly. It would be very painful if he moved his hands even a little bit.

By the fifth day of his hunger strike, Mr. Cao's lips began to crack and bleed. His blood vessels also shrank, making it very difficult to do infusions.

Seeing that he suffered so much, his cellmate lent his clothes to him and washed his dirty clothes.

On September 26, the 11th day of his hunger strike, the police finally released him in the evening.

On the next day, staff members from the local residential committee visited Mr. Cao and gave him a document issued by the court that approved his serving time outside of the prison because of his physical condition from September 26, 2019 to August 24, 2020.

Another group of officers visited Mr. Cao again on September 28, ordering him to report to the local judicial bureau every week about what he had done during that week. They also demanded to put an ankle monitor on him.

Mr. Cao refused to comply. The officers later relented and left without putting the monitor on him.

For not renouncing his faith in Falun Gong, Mr. Cao has been repeatedly arrested and twice imprisoned for a total of seven years since the communist regime began the persecution in 1999.

He was beaten, forced to take unknown drugs, deprived of sleep, and forced to stand or sit on small objects with an uneven surface for long hours while detained.

Shanghai Engineer, 79, Sentenced to One Year in Prison for Giving Out Falun Gong Calendars

Senior Citizen Persecuted Since 1999, Faces Yet Another Illicit Trial