(Minghui.org) Today's news from China includes incidents of persecution that took place in 4 cities or counties in 3 provinces，where at least 6 practitioners were recently persecuted for their belief. 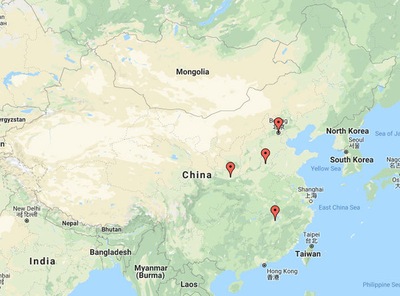 Mr. Wang Fawang, around 62 years old, from Chengzao Township, Neihuang County, was arrested by Henan Province Public Security Bureau personnel in August 2019, for talking to people about Falun Gong. He was detained.

Mr. Wang was previously arrested in July 2008, and sentenced to five years in prison. He was mistreated in the Xinmi Prison, Zhengzhou City. He was repeatedly beaten, insulted, and tortured.

Prison guards ordered several inmates to beat Mr. Wang on June 16, 2010. His intestines were ruptured, and he underwent surgery.

Mr. Zhao Xilai from Heilongjiang Province was arrested by officers from the Ganjiakou Police Station in the Haidian District, Beijing, on the afternoon of March 30, 2019, for talking to people about Falun Gong near the gate of Yuyuantan Park.

He was taken to a detention center, but was not admitted after he failed the physical exam. Mr. Zhao’s home in Hegang City, Heilongjiang, was forcibly opened, and ransacked by unidentified persons.

Ms. Yan Ling was arrested, and taken to the Beijing No. 1 Detention Center.

Ms. Wan Lihua was arrested by Nanchang Domestic Security officers on the morning of September 24, 2019, for talking to people about Falun Gong in Nanchang City University. Her home was ransacked. She is being held in the Nanchang No. 1 Detention Center.

Mr. Wang Jian and another practitioner with the last name Luo were arrested at their rented home on September 26, 2019. Their whereabouts are unknown.

“Removing the Attachment of Seeking an End to the Persecution”

“Three Sichuan Residents Sentenced for Reading Books of Their Faith Together”