(Minghui.org) Today's news from China includes incidents of persecution that took place in 7 cities or counties in 6 provinces, where at least 20 practitioners were recently persecuted for their belief. 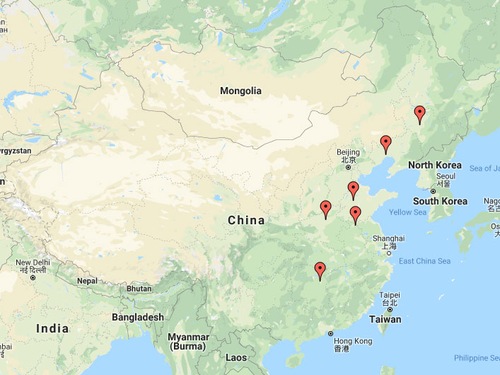 Ms. Zheng Yuling was arrested by officers from the Tongshan Police Station on September 28, 2019. Her home was ransacked, and Falun Dafa books were confiscated.

Ms. Lu Wenmei was arrested and her home ransacked by officers from the Fengcai Police Station on the morning of September 28. Her whereabouts are unknown.

Ms. Niu Huiqing was followed and arrested by officers from the Xingyang City Domestic Security Division and the Jingchengban Police Station on the afternoon of September 12, 2019, for distributing Falun Gong materials. She was taken to the Xingyang Detention Center for 15 days. The police took Ms. Niu’s house keys and ransacked her home without her being present. They confiscated Falun Dafa books, printed materials, photos of the founder of Falun Gong, a printer, a computer, an MP4, and other personal belongings. Ms. Niu was released on September 26.

Ms. Zhao Ronghua, Mr. Wang Haiping, and another practitioner were arrested by officer Shi Guobin and others from the Xingyang Domestic Security Division and the Suohe Police Station on September 26. The three practitioners were taken to the Xingyang Detention Center. Ms. Zhao and Mr. Wang were transferred to the Zhengzhou City No. 3 Detention Center a few days later.

Mr. Zhao Qinghua and Mr. Zhang Xirong were reported to the police on the morning of September 26. They were followed by officers from the Xingyang Domestic Security Division and the Suohe Police Station. The two men did not know they were being followed and went to Ms. Wang Haiping’s home. The three practitioners were arrested after they left. The officers deceived Ms. Wang’s family into opening the door. They ransacked the place and confiscated a printer and computer. The three practitioners were taken to the Xingyang Detention Center that afternoon. Mr. Zhao and Ms. Wang were transferred to the Zhengzhou No. 3 Detention Center on September 30.

Ms. Wang, about 65 years old, from the Tianqiao District was also arrested. Her whereabouts are unknown.

“Once Imprisoned 3.5 Years, Liaoning Woman Arrested Again for Her Faith”