(Minghui.org) Today's news from China includes incidents of persecution that took place in 12 cities or counties in 10provinces, where at least 16 practitioners were recently persecuted for their belief. 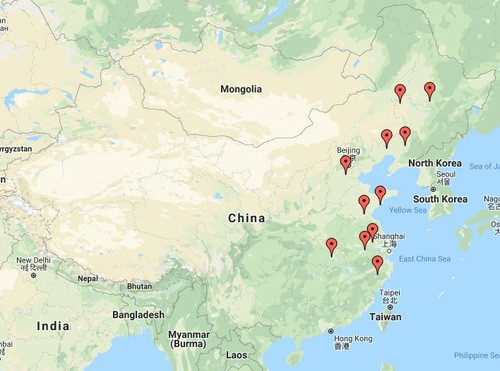 Ms. Qi Fengzhen from Baicheng City was on her way to a relative’s wedding in Shandong Province on September 18, 2019, when she was arrested and searched at the security point in the Baicheng Railroad Station. Paper bills with Falun Gong messages written on them, and other personal belongings were confiscated. The railroad police ransacked Ms. Qi’s home on the afternoon of September 19.

Ms. Qi is being held in a detention center.

Ms. Tang Kedi, in her 70s, was arrested at home by officers from the Runzhou District Police Department on September 18, 2019. Her home was ransacked. She is still being held in police custody.

A dozen officers from the Wuhu City 610 Office, Domestic Security Division, police department, and the police station ransacked Ms. Qi Cuixia’s home on the morning of September 27, 2019. They confiscated many personal belongings, including computers, printers, and paper bills with Falun Gong information printed on them.

Ms. Qi was taken to the police department, and then to a hospital for a physical exam. She was later taken to a detention center, but the authorities there refused to accept her, citing her elderly age. Ms. Qi was released on bail.

Mr. Yang Shuming from Yangshulinzi Village, Mengyin County, was arrested on his way home from Jiaozhou City on the afternoon of September 26, 2019. The police extorted 2,000 yuan from him, and took him to the local detention center.

Ms. Shan Qinshu was arrested at home by officers from the Sujiatun District Domestic Security Division on December 8, 2018, and taken to the Shenyang City Detention Center. The Sujiatun Court sentenced her to an 18-month prison term. Her family appealed to the Shenyang Intermediate Court, but the original verdict was upheld.

Ms. Lan Lihua was arrested by officer Song Zhenghe from the Sujiatun Domestic Security Division on November 6, 2018, for giving someone a Falun Gong calendar. Ms. Lan was taken to the Shenyang Detention Center, and tortured. When she was caught doing the Falun Gong exercises, she was hung up in the air with her hands cuffed behind her back. She was recently diagnosed with breast cancer, but was still transferred to the Liaoning Province Women’s Prison on September 24, 2019.

Ms. Zhao Guiqin’s sister was arrested for her belief in Falun Gong. The police later told the family to bring several heart medications for Ms. Zhao's sister to take. This was thought to be a strange request, as her sister never had heart disease before.

Ms. Wang Guiqing and Ms. Ma Guilan from Kangping County were arrested on the morning of September 30, for talking to people about the persecution of Falun Gong. They were taken to the Zhennan Police Station. Their homes were ransacked that afternoon. Zhennan Police Station director Zhao Hongjiang and Domestic Security Division head Fang Xuefei transferred Ms. Wang and Ms. Ma to the Shenyang First Detention Center at around 6:00 p.m.

Ms. Ming Guizhen, in her 70s, was arrested by agents from the Political and Legal Affairs Committee on the morning of September 17, 2019, for talking to people about the persecution of Falun Gong. Her home was ransacked, and Falun Gong books and a photo of the founder of Falun Gong were confiscated.

Ms. Pan Jinshan has been taken to a brainwashing center.

Mr. Yang Zhixiong was arrested on September 26, 2019. His home was ransacked. He is being held in the Rongcheng Detention Center.

Ms. Zhang Daqiu was arrested on September 11, 2019. She is being held in the Daoli Detention Center on Jichang Road. Her family have not been allowed to visit her or bring her any clothes and other necessities.

Ms. Gao Chunxiu, 69, passed away on September 24, 2019. She was a resident of Yutangkan Village, Hongguang Town, Pidu District.

When the persecution against Falun Gong began in 1999, Ms. Gao went to Beijing to appeal for the right to practice her belief. She was detained for 13 months as a result; first in the Pi County Detention Center, and then in the Pi County Brainwashing Center. She developed heart and stomach disease during her detention, but fully recovered after she was released and able to practice Falun Gong again.

Ms. Gao was arrested again on July 8, 2014. The police confiscated over 20,000 yuan in cash, Falun Gong books, computers, and other personal belongings. She was sentenced to a three-and-a-half-year prison term, and was incarcerated in the Longquanyi Women’s Prison. She lost consciousness three times in prison and was taken to the hospital, where she was injected with unknown drugs.

Ms. Gao was released in early 2018. Her health significantly deteriorated six months later. She could not even drink water. Ms. Gao passed away on September 24, 2019.