(Minghui.org) On June 4, 2000, I went to Yinchuan City in Ningxia Hui Autonomous Region with another practitioner who I will call Ling, to stay with her aunt. We heard that local practitioners didn’t have any materials about Falun Dafa (also known as Falun Gong) to distribute so we were going to help them.

We were arrested and transferred to three police stations before being sent to the Yinchuan Detention Center. I was a little upset on the way to the detention center but after remembering that I was a Dafa practitioner who had experienced illegal detention twice before, I gradually felt at ease.

The inmates in my cell weren't so bad. The “head inmate” gave me a badge that read “Cult” and told me to wear it on my chest. I said, “Falun Gong is not a cult!” I firmly refused to wear the badge and tore it up.

He told me that I couldn't go anywhere without wearing a badge, then gave me a blank badge on which I wrote “Falun Dafa.” The three Chinese characters were very eye-catching.

During morning exercise time on the second day, inmates in the neighboring cells were surprised when they saw my badge. Some of them shouted excitedly, “Falun Dafa, we have Falun Dafa here!” They smiled at me in a friendly way.

The Yinchuan Detention Center made sure all inmates did the morning exercises, including the hardened criminals. The regular inmates followed a radio broadcast to do gymnastic moves in lines. The career criminals, who wore handcuffs and shackles, were ordered to watch.

I saw two females wearing handcuffs and shackles slowly walking towards us. Looking more carefully, I realized that one of them was Ling. She was being persecuted because she was so steadfast in cultivation. I thought that I must try to let people know practitioners were being persecuted and that Falun Dafa is good. I raised my arms, closed my eyes, and started doing one of the Dafa exercises.

Somebody shouted, “He is practicing Falun Gong,” and chaos ensued. Somebody tried to hold my hands down, but I resisted and kept doing the movements. I heard the guard say, “Take him to the front.” A few inmates held my arms and pushed me to the front. I thought, “Since you won't allow me to practice, I will recite the Fa to let you know what our Master teaches.” I recited the introduction to the main text, Zhuan Falun, in a loud voice. They all listened to me, intrigued.

Seven days later, I went on a hunger strike and was handcuffed and shackled as a result. I was also required to stand with the career criminals and watch the morning exercises. An inmate beside me said, “What you recited the other day was really good; it sounded very reasonable.” He even repeated a few of the sentences. I was very happy and realized that Dafa was so powerful.

I told them that it was written by Master Li, the founder of Falun Dafa, and was part of a completely righteous set of teachings. One inmate said, “My mother also practices Falun Dafa, she is doing great and I am happy that she practices.” Another said, “Today we are standing together, but tomorrow we could be sentenced. We will be very lucky if we are not immediately executed. However, we all support Falun Dafa.” Seeing that those people facing death still had righteous thoughts about Dafa, I was really moved.

I kept reciting Master's teachings out loud. The guards cuffed my hands behind my back, with one hand down the back of my neck and the other touching my waist. It was really painful, and I knew that staying in this position for a long time could leave a person disabled. However, I kept reciting the teachings because I really valued this chance and wanted people with predestined relationships to hear them. 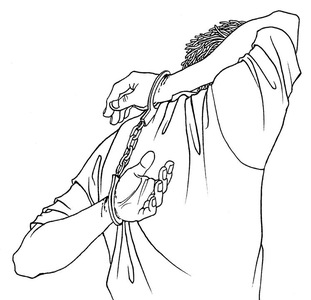 Illustration of the excruciating back cuffing that the Chinese Communist Party uses.

Seeing that I hadn't stopped reciting the Fa even though I was suffering from the awkward position of my arms, a guard took me to an office. I kept on reciting the Fa. The guard sat there and quietly listened to what I said. When the inmates finished exercising, the guard asked me, “Are you finished?” I said “Yes.” Then he unlocked the handcuffs, and let me go.

That morning, I recited a selection of articles from Essentials for Further Advancement and some other poems from the book Hong Yin. My purpose was to have people near me hear as much Fa as possible, even those who were persecuting me.

My Heartbeat Was Unaffected during a Hunger Strike

I went on a hunger strike to protest the persecution of Falun Dafa. An inmate in his 50s told me he was a doctor of traditional Chinese medicine and wanted to check my pulse. After he felt my pulse, he said, “Your heartbeat is okay now, but without eating, you won't last another two to three days.”

Two days later, he felt my pulse again, and said, “It is still okay, but you can't continue like this for another two to three days. You ought to at least drink some water.”

Without eating or drinking anything, I communicated with inmates normally and clarified the truth to them. After three more days passed, the doctor checked my pulse again. He said, “Amazing! Your heartbeat is stronger than mine!” His voice was full of admiration. The other inmates also witnessed the wonder and miraculous nature of Dafa.

Six days passed, and I was as healthy and energetic as before. On the morning of the seventh day, the guards came and declared that I had breached the prison rules by going on a hunger strike. They put handcuffs and shackles on me and transferred me to another cell.

On the way to the new cell inmates looked at me as we passed, showing support and respect for Falun Dafa. One of the inmates said, “Come to our cell. We will take care of you. Another practitioner was detained here before, do you know him? He was also a Falun Dafa practitioner and was tortured. Such a great man, we all admired him. We took good care of him. The guys in the cell you are walking to don't know how to take care of people, we do. Let us take care of you every day.”

I was deeply moved by his words. The former practitioners had done well there, and created a good environment for those practitioners who came later.

Seeing My Arms in Another Dimension

The inmate in my new cell also treated me well. He asked someone to tear an old towel into strips and cover my ankles so they wouldn't be bruised by the shackles. Because my hands were cuffed behind my back, he assigned an inmate in his 40s to help me with washing my face, brushing my teeth, and even urinating.

I didn't have any bowel movements but I urinated as usual when I was on the hunger strike; I don't know where the liquid came from because I didn't drink anything. After that helpful inmate left our cell, another inmate who was under 20 was assigned to look after me.

On the first night, the cuffs unlocked themselves. I said excitedly, “My cuffs are open.” The inmates told me not to talk loudly, so that I would suffer less. I slept soundly that night.

I was cuffed again in the morning. With my arms held behind my back, I felt like a disabled man; I couldn't do anything. I especially suffered when I was sleeping. I couldn't lie on my back, and no matter which side I slept on I had to turn over periodically to relieve the arm I was resting on, which made my sleep very poor.

Early one morning, in a state between sleep and wakefulness, I felt my arms comfortably resting on my chest. I was lying on my back and was surprised, “Are my hands not cuffed anymore?”

Ever since I began practicing Dafa in 1996, I hadn't seen anything in other dimensions although many fellow practitioners saw colorful Falun and other magical things. I thanked Master for the encouragement, which helped me rise above all the suffering.

I Was Still Healthy after 20 Days of Hunger Strike

The guards ordered the inmates to force-feed me. In Beijing they usually used powdered milk for this but, because Yinchuan is a poor area, they crushed some bread and soaked it in water to feed to me. They tried to pry my teeth open with a toothbrush. I firmly resisted and my teeth were almost broken. In the end they gave up.

The head inmate told them to force-feed me with his personal milk powder. I still resisted, and almost all his milk powder was wasted. He became angry and held a “criticizing meeting” in which the inmates took turns criticizing me. The head inmate tried to convince me to protect my health because that was being responsible to my family.

I understood they were all kind and decent people. Because I passed the test of human sentimentality, the environment changed the following day. They no longer force-fed me, but just pretended to as a show for the guards. The head inmate treated me as his close friend, and we talked to each other without reservation.

The guards also treated me nicely. There was one in particular who often visited me. In the beginning he suggested that I eat something secretly. I told him that as a Dafa practitioner I valued truthfulness and could not do that. He showed more and more sympathy towards me. He said he would talk to the police officers at the National Security Division to help get me released as soon as possible.

Later, I learned that he traveled from the suburbs to downtown and went to the National Security Division several times. He told them I was still on a hunger strike and asked them to release me soon. His efforts helped get me released.

One morning, the head inmate excitedly ran into the cell, shouting: “You are going back home. You are to be released.” He accompanied me to the office to get the handcuffs and shackles removed but the key had been taken home by a guard. They used a hammer to break off the cuffs and shackles.

I walked out and saw the head of the National Security Division waiting for me. I saw surprise in his eyes when he saw what I looked like. Perhaps he assumed I was on the brink of death after more than 20 days of not eating or drinking.

I met up with Ling again after being separated for a long time. She was also in good spirits and full of vigor. We walked out together. The people there witnessed the extraordinariness of Dafa once again.

Back home in Beijing, local practitioners had participated in our rescue. Ling’s mother and grandmother, who is in her 80s, went to the local police station to ask for our release in a dignified manner. My wife sent righteous thoughts for us every day. She also wrote to the guards in the Yinchuan Detention Center to tell them the facts about Falun Dafa and the persecution. My mother let go of sentimentality and strengthened us with righteous thoughts. Many other practitioners also reinforced us with their righteous thoughts.

Eighteen years have passed (note: this article was written in 2018), and as a Dafa practitioner, I have experienced so much. Looking back, my heart is full of gratitude toward Master and Dafa. The only way to express my appreciation is to be more diligent, to cultivate myself better, and to save more sentient beings.