(Minghui.org) Today's news from China includes incidents of persecution that took place in 22 cities or counties in 9 provinces, where at least 45 practitioners were recently persecuted for their belief. 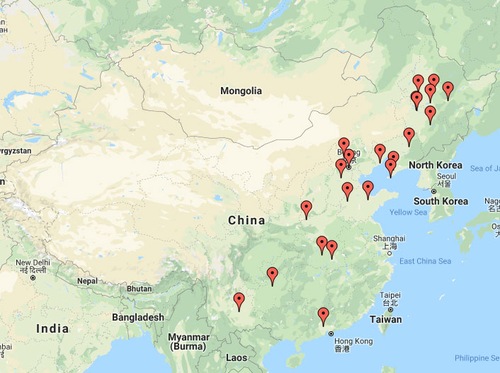 Ms. Zhao Liuji, 65, from Yanqing District, is incarcerated in the No. 3 Ward, Beijing Prison. She was subjected to brainwashing and made to do slave labor.

Instigated by the prison guards, the inmates abused Ms. Zhao physically, and her body was bruised in many places. She has become mentally disoriented.

Ms. Gao Ximei from Ranghulu District was recently arrested by officers from the Daqing City Police Department led by He Jinggui, a residential police officer.

Mr. Gong Jianjiang was tracked down by the police via cell phone when he was calling others to tell them the facts about Falun Gong on the morning of September 11, 2019. Officers from the Development Zone Police Department subsequently followed him and arrested him at home. The officers ransacked Mr. Gong’s home and confiscated a computer, a cell phone, and Falun Dafa books. He is being held at the police department.

Ms. Liu Zhongmin from Suihua City, Heilongjiang Province, was arrested by officers from the Nanyuan Police Station, Fengtai District, Beijing, on May 22, 2019. She was officially placed under arrest on July 4.

Ms. Dong Wenxiu was arrested at home on the morning of September 11, 2019. She was handcuffed. A large number of personal belongings in her home were confiscated by the police.

On the same morning, officers from the Railway Police Department arrested Ms. Wang Yurong, from Xiangfang District, who had been displaced, at the place where she was staying.

Female practitioner Xiaofang, Ms. Fu, and her child were arrested by Songyuan City police on the morning of September 10, 2019.

The officers pried open practitioner Xiaojing’s door and arrested her on September 10, 2019.

Ms. Liu Ying, her sister, Mr. Li Dongjun, and his non-practitioner wife were also arrested that day. Their homes were ransacked.

Ms. Li Liwen was arrested by officers from the Jilin City Police Department and the Erdao Township Police Station, Fengman District, on July 19, 2019. She was held in the Jilin City Detention Center. She was taken to the Jiangnan No. 465 Hospital when she was in critical condition on September 10. Her family saw that she was attached to the ventilator and looked disoriented.

She was later taken to another hospital which the Changchun City Police Department designated. The hospital refused to accept her. She was then taken back the detention center.

Mr. Yin Zhengbing from the Wafangdian Bearing Factory was lured to the Xinhua Police Station, where he was arrested on April 29, 2000. The police confiscated Falun Dafa books, videotapes, audiotapes, and a radio. Mr. Yin was taken to the Wafangdian City Detention Center.

Ms. Yang Chunhong from Xintun Subdistrict, Dongzhou District, was recently reported to the authorities after she talked to people about Falun Gong. She was arrested by officers from the Longfeng Police Station, and held in the Nangou Detention Center.

Ms. Li Yonghong was arrested by officers from the Wanxin Police Station, Dongzhou District, for posting Falun Gong materials on the morning of August 31, 2019. She is being held in a detention center.

Ms. Yan Qinghua from Jinzhou District was released on bail by the Xianjin Police Station on July 10, 2019.

She went to the police station on September 10 and asked the authorities to immediately and unconditionally release her husband Mr. Ding Guochen.

Li, a team leader in the police station, pulled her hair and pushed her around. A lot of her hair was pulled out.

Ms. Wang Guifen was arrested when she was distributing Falun Gong materials in Shalingyang Village, Shahe Town, on the afternoon of September 11, 2019. She was taken to Huludao City.

Ms. Yan Yufeng was arrested by Xu Haitao, director of the Houcheng Town Police Station, and other officers led by Wang Xinbao, Houcheng Town Party secretary, on the morning of September 11, 2019. The officers confiscated printed materials, a printer, and amulets. Ms. Yan was taken to Zhangjiakou City.

Ms. Sun Liying was officially arrested on the evening of September 12, 2019. She is still being held in the Baoding City Detention Center.

Mr. Gao Xiaoxiong from Xingwang Village, Peishan Town, Yi County, Baoding City, Hebei Province, was arrested in Zunyi City, Guizhou Province, by the local police on September 8, 2019. The officers ransacked his home, and also took his wife and two young children, who are about four or five years old, to the police station. The wife and children were released at around 3:00 a.m. Mr. Gao is being held in the Zunyi City No. 2 Detention Center.

Mr. Qin Fajun was arrested by the local police around August 28, 2019. The officers confiscated a computer, and a printer, among other items.

Ms. Sun Qinghua was arrested by Li Zhiqiang and other officers from the Yancheng Town Domestic Security Division, Qihe County, on September 10, 2019. The officers confiscated Falun Dafa books, stickers with Falun Gong information, and 1,700 yuan in paper bills with Falun Gong facts printed on them.

Mr. Zheng Fuxiang, in his 70s, was arrested at the Changle County Chinese Medicine Hospital on September 7, 2019.

Shortly after Ms. Shang Qifeng was released from prison, she was again secretly arrested by the Jingshan City Domestic Security officers in August 2018. Her current whereabouts are unknown.

The police ransacked their homes and confiscated 90,000 yuan in cash, along with other belongings from Mr. Fu’s home. Both practitioners were taken to the Wuhan City No. 1 Detention Center that evening.

Ms. Xia Yun was arrested at her son’s home on September 5, 2019. She was taken to the Hubei Province Women's Prison.

Ms. Yi Zhaoling, a university teacher from Guangzhou City, was arrested at home by officers from the Ya’an Police Department, Sichuan Province, across provincial boundaries. Ms. Yi is being held in the Xingang Police Station, Haizhu District, Guangzhou City.

Mr. Zhang Guangchang, 67, and his wife Ms. Tian Qiuzhen, 64, from Huadu District were arrested at home by the head of the Huadu District Domestic Security Division on September 10, 2019.

Ms. Xiao Yuxia and her husband Mr. Tang Wenxiang were arrested by officers from the Wuliduo Police Station and the Guandu District Domestic Security Division on the morning of September 6, 2019. The officers confiscated Falun Dafa books, and photos of the founder of Falun Gong, among other items.

“Natural, Magnanimous, and Amazing - The Cultivation Stories of My Husband and Myself”