(Minghui.org) Falun Dafa practitioners from around Australia gathered in Melbourne to take part in activities October 11-13, 2019. They held a parade, demonstrated the exercises, and held a cultivation experience sharing conference.

A grand parade was held in the city's central business district on Friday, October 11. The parade commenced from Treasury Gardens and was led by the Tian Guo Marching Band. The parade route passed through the busiest streets in town and showed tourists as well as local residents the beauty of the spiritual practice. 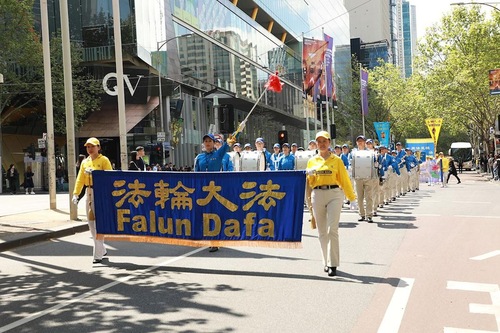 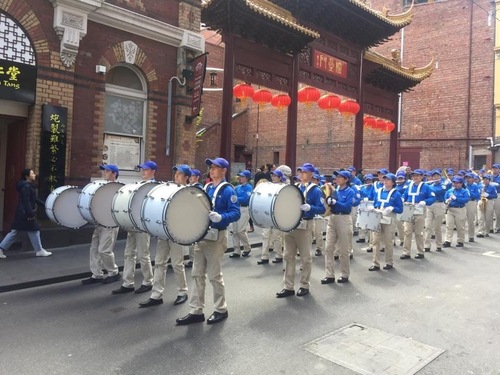 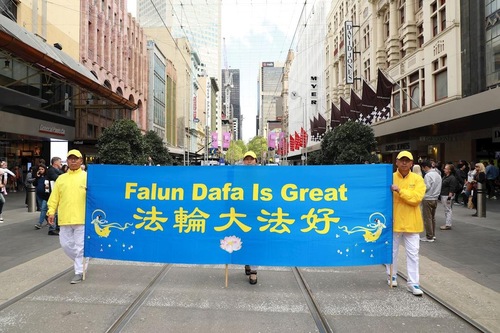 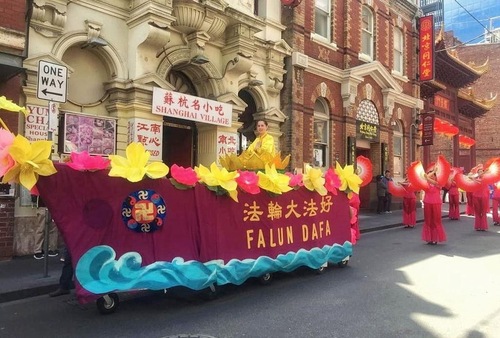 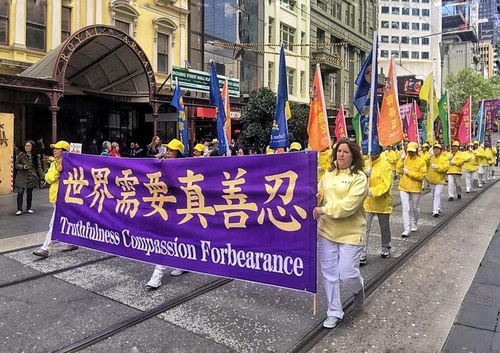 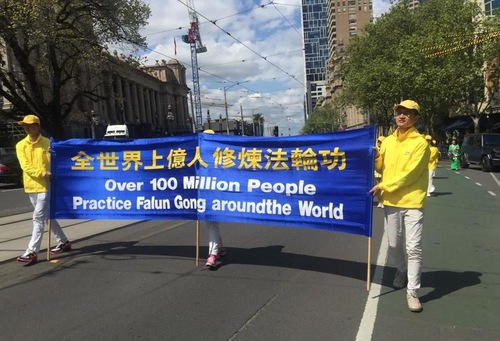 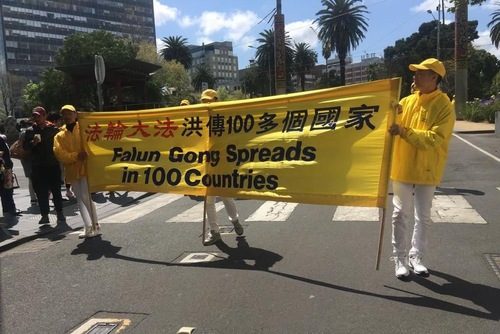 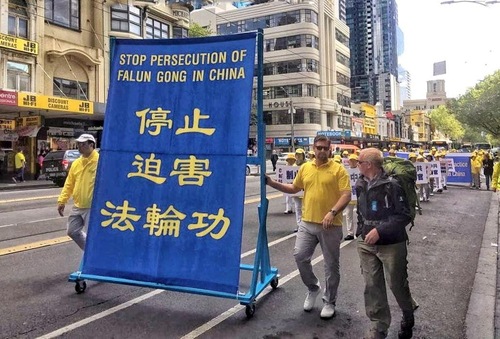 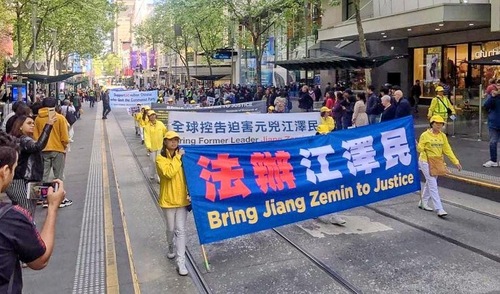 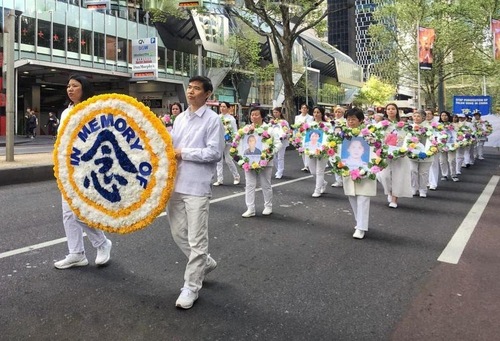 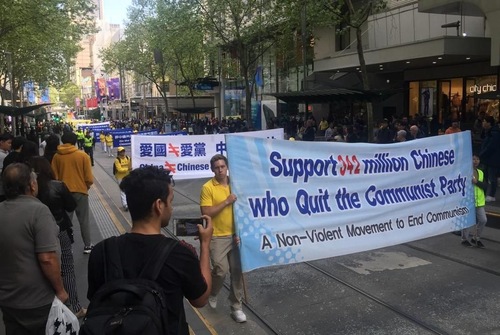 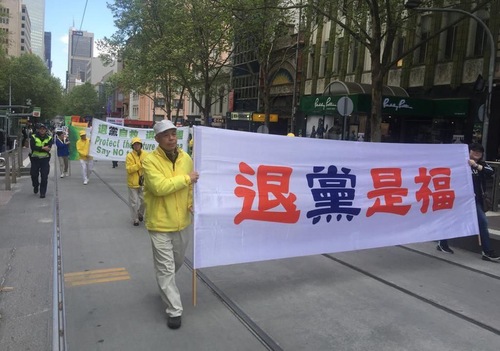 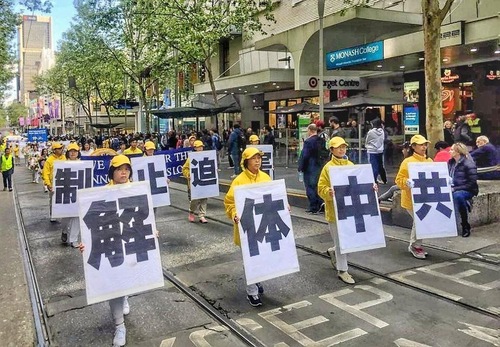 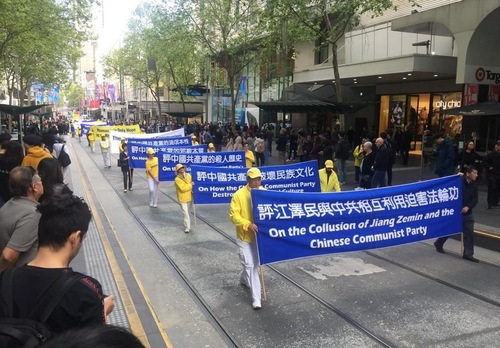 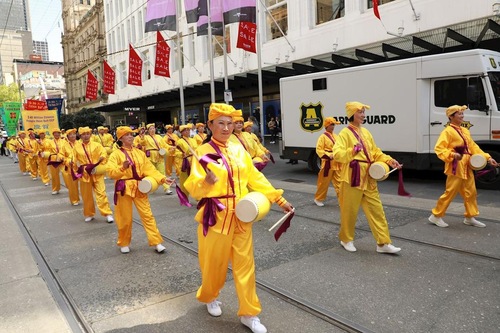 It was a beautiful, sunny day and many people who work in the city came out of their offices during their lunch breaks and saw the colorful, peaceful parade. Spectators said it was a spectacular sight and expressed support for the practitioners' peaceful resistance against the brutal, ongoing persecution in China. Several Chinese from China exclaimed loudly, “Falun Dafa is wonderful! We support you!” 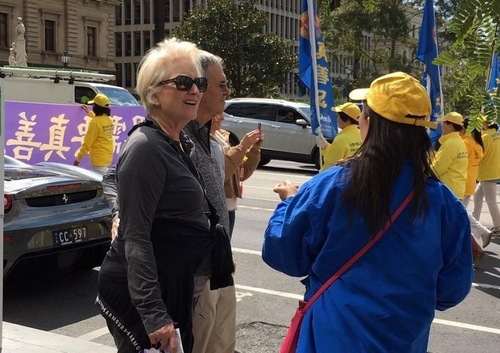 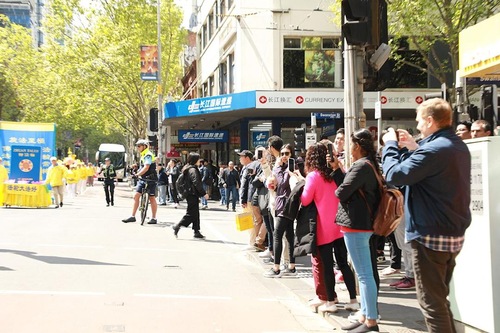 Tourists and local residents stopped to take photos of the parade and asked practitioners for information about the spiritual practice. 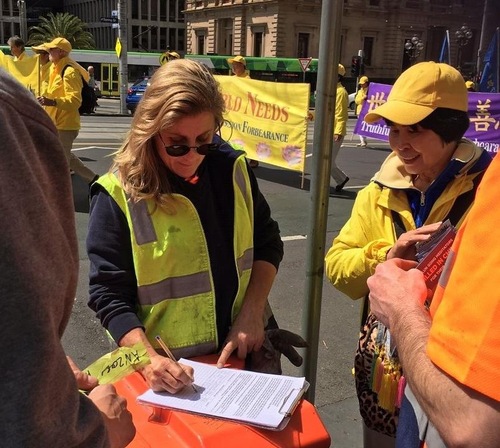 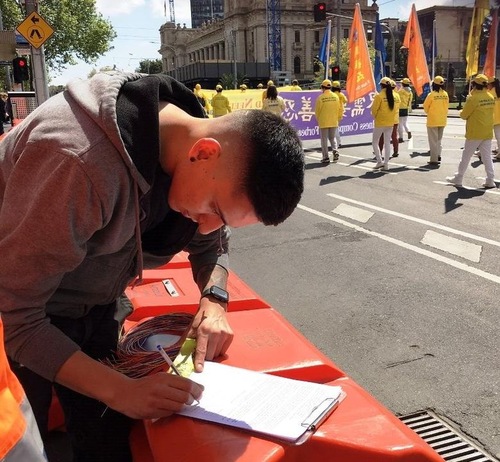 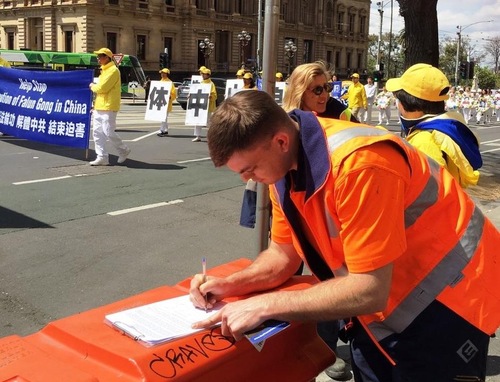 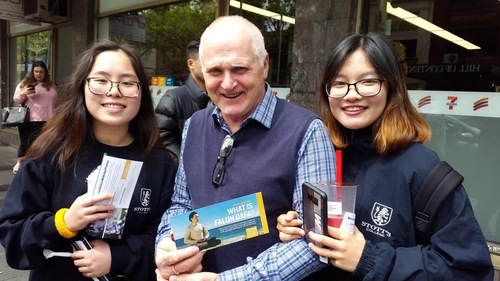 Runar (center) a teacher at a language school in central Melbourne, and student Gimmy (left) said they were thrilled to see the parade during their lunch break.

Three tourists from Beijing stopped to watch the parade. It was the first time they had seen a parade by Falun Dafa practitioners. They said they were amazed. They kept repeatedly saying, “Falun Dafa is good! We support you!” They also asked for information.

A young man from China’s Hunan Province said to the practitioners, “I support Falun Dafa.” He agreed to renounce his membership in the communist regime and its affiliated organizations.

Mr. Yu said he was from China, and was visiting Australia. He said he admired practitioners for persistently raising awareness during the 20-year long persecution. He said that he witnessed how some of his co-workers became better people after they began practicing Falun Dafa. Mr. Yu added that he plans to begin practicing Falun Dafa when he returns to China. 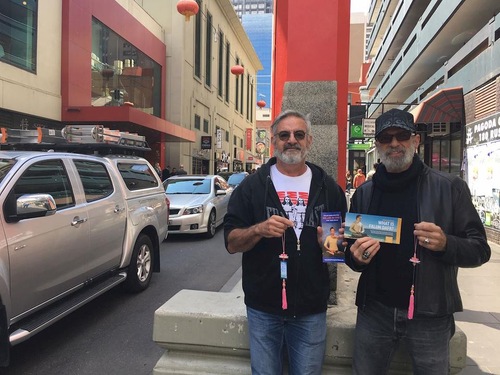 Robert Reed and Charles Dipaolis, artists from Florida, said they were appalled by the atrocities taking place in China.

Robert Reed and Charles Dipaolis are artists from Florida on a short holiday in Melbourne. Charles said he read a news report several years ago about the atrocities happening in China, and was upset. They learned that more and more Chinese people have learned about the persecution and have chosen to quit the CCP, and said they supported the movement. They felt it was good to see such activities being held in Australia as well as throughout the world to bring attention to the issue. 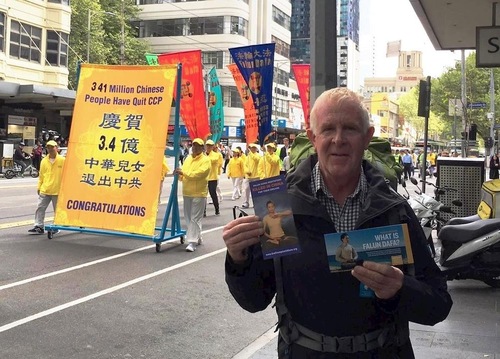 Michael from Tasmania said he felt calm and peaceful while watching the parade.

Michael, who lives in Tasmania, was on a three-day visit to Melbourne and saw the parade. He said that while watching the parade he felt a beautiful energy, and felt calm and relaxed. Michael said he hopes practitioners can organize a class to teach Falun Dafa in his hometown. 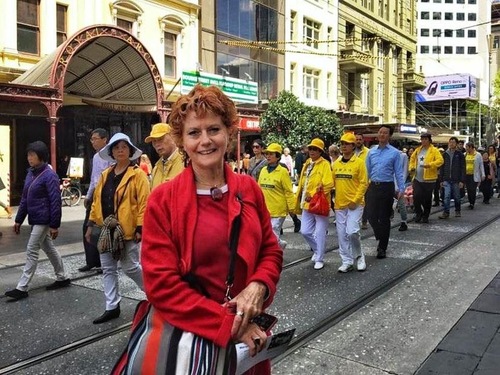 Jan feels that practitioners are doing a remarkable thing.

Jan, who lives in Melbourne, exclaimed that Falun Dafa practitioners are safeguarding humanity, protecting those who are being persecuted, and upholding justice. She said that the practitioners are doing a remarkable thing.

She was shocked to learn about the forced organ harvesting, and thanked practitioners for letting people know about it. 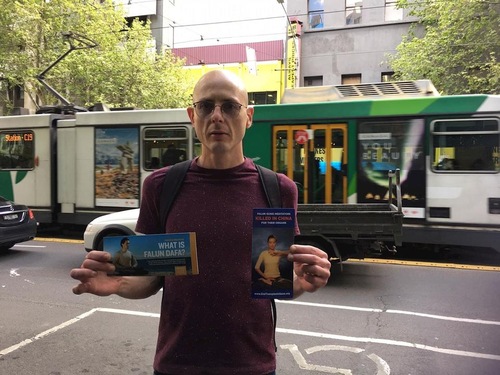 Tim, a music producer, said he hopes more Australians will learn about the persecution and do something to stop it.

Tim, a music producer, was very touched by the parade. He said, “Practitioners have sacrificed their time to tell people how wonderful Falun Dafa is, and about the torture suffered by practitioners in China. We are all humans with the same rights. Your efforts to stand up against an authoritarian regime is courageous. I hope Australians will learn about this and do something to stop it.” 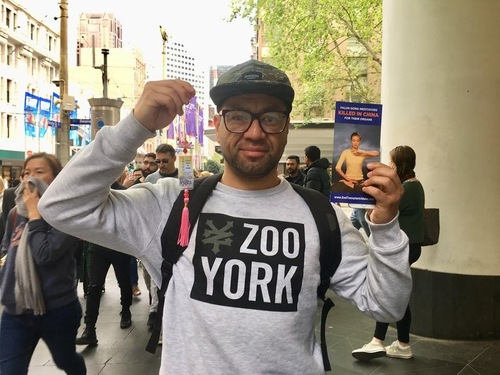 Matt an IT expert who works in central Melbourne.

Matt is an IT expert who works in central Melbourne. He said he was very touched by the parade, and cried when he learned that practitioners' organs were being removed by force and sold for profit in China. He took several photos of the parade, and said that the message was very important. He told practitioners he plans to go back and sign the petition online as well as spread information on his social media platform. 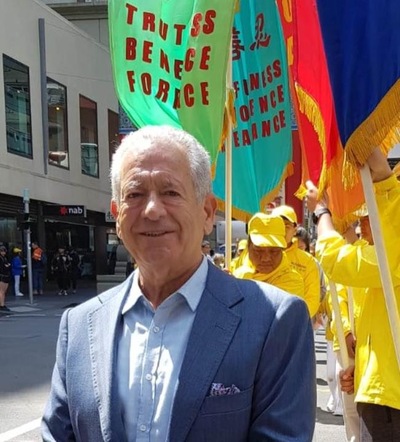 Robert, a retired engineer, said he loved the parade and pays attention to the persecution of practitioners in China.

Robert, a retired engineer, said he loved the parade and felt that the information would also benefit others. He said he pays attention to the persecution of practitioners in China and the forced organ trade. He also pointed out that people should not believe the communist regime's propaganda.