(Minghui.org) About 200 Falun Gong practitioners who are coordinators from Taichung, Changhua, Nantou, and Yunlin in central Taiwan met for a day to study the Fa teachings and share experiences about their role as coordinators. They gathered at a primary school on October 6, 2019. They shared experiences on diligently cultivating, doing the three things well, assisting practitioners, and having a better cultivation environment so practitioners can fulfill their vows and save sentient beings. 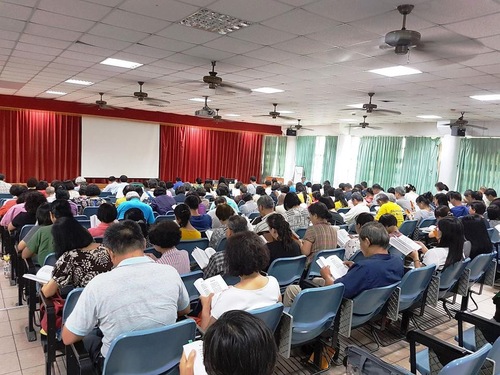 Understanding the Responsibility and Mission of Practitioner Coordinators

Coordinator Chang, a veteran practitioner, said, “I often felt that I was not smart and not capable in many areas. After becoming a coordinator, I would find excuses for myself when facing a challenge: ‘I knew I couldn’t do well! I was being wronged.’”

He said that when he first took up cultivation, he did not understand the relationship between loss and gain. Eventually he realized that everything was connected to improving his xinxing. After a while, he noticed that his abilities had improved and his wisdom was unlocked. Now when facing a tribulation, he can find a solution as long as he follows the Fa.

He used to be introverted and wasn’t good at communicating. But when he became a coordinator, he realized he had to step up to the plate. “You should often call and communicate with fellow practitioners and care for them. When a fellow practitioner has difficulties, listen to him first and then go back and think about how to help him.

“Everyone's abilities come from the Fa. One will gain from practicing Dafa and passing tribulations.”

Thinking from a Different Angle and Being Inclusive

Coordinator Cai said, “Through communication and experience sharing, I've learned to listen to others instead of being eager to say what I wanted to say. I understand that we are to coordinate fellow practitioners and save sentient beings.

“A coordinator has many responsibilities and missions. Everyone has different issues. There are many things to be done. But for fellow practitioners, we must first put down our notions and be humble and respectful. Every practitioner has a path arranged by Master Li.”

She concluded, “If we look at and judge things from a limited perspective, we are biased. Coordinators, those-in-charge, and contact persons are all capable. We need to trust them, be tolerant, understand them, and be humble. We all have our own shortcomings. Don’t cover them up. Accept fellow practitioners who point out our shortcomings. Don’t miss the opportunity to improve.”